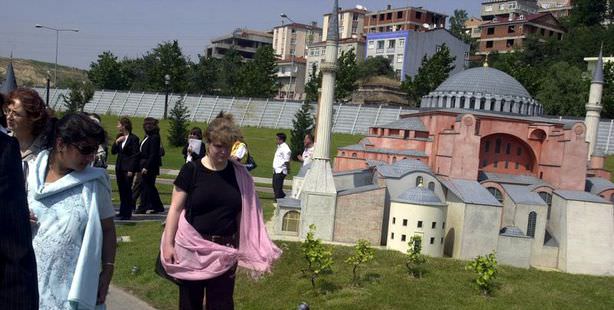 Miniatürk, a miniature park located on the shore of the Golden Horn in Istanbul which hosts 1/25th scale models of significant structures located throughout the Turkish and Ottoman geography from the past 3,000 years, is seeing an increase in interest every year since it was first opened a decade ago.

Opened a decade ago by Prime Minister Recep Tayyip Erdoğan, Miniatürk, a miniature park located on the shore of the Golden Horn in Istanbul hosts models built to a 1/25th scale of 122 significant structures spanning back to 3,000 years of history in the Turkish and Ottoman geography. Over the past decade since its opening, Miniatürk has had 6.5 million visitors. Out of the 122 models on display, 59 are of significant structures located throughout Istanbul, 51 are from the greater Anatolia region and 12 are remnants from the Ottoman geographical region.

Miniatürk Operating Director Resul Erkan explains that they have left open space for additional models to be added to the miniature park which spans 60,000 square meters making it the largest of its kind in the world. Erkan explains that they plan to add one to two models a year, which will be chosen through a selective process overseen by a council of academics. Their ultimate goal is to reach 160-170 models, states Erkan. "Over the past decade, a total 6,458,647 tourists have visited the park, 463,926 of which were foreigners", said Erkan adding that they have seen a 300 percent increase in the number of visitors over the past three years.

"I believe that this number will increase greatly over the next ten years because every year more people hear about it and transportation is being improved. We are also making arrangements with travel agencies and are promoting the park through a variety of means. We also provide informative guides for visitors in nine different languages using headsets," stated Erkan.

Resul Erkan went on to state that visitors never leave without taking a photograph of the model of the Bosphorus Bridge and that out of the 122 models on display, which represent the real-life structures identically to a 1/25th scale, the most popular are the Bosphorus Bridge, the Atatürk Mausoleum, the Mardin Stone Houses, the Halil-ür Rahman Mosque and Balıklı Lake.