The Brits are coming to Dalaman 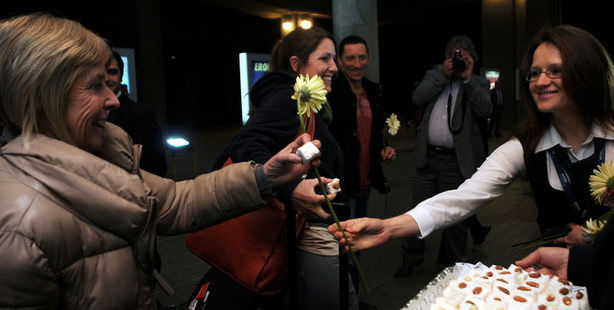 With the landing of the first flight to arrive to the ATM Dalaman Airport from Blackpool, England passengers were greeted with carnations and Turkish delight upon their arrival.

ATM International Terminal General Manager Hamdi Güvenç has announced that 147 British passengers landed to the ATM Dalaman Airport on the first flight by Jet2.com from Blackpool. Passengers were greeted with carnations and Turkish delight for the first arrival of what Güvenç refers to as a "project of peace".

British Airline Jet2.com will now be servicing the popular resort region of Dalaman from six different U.K. cities on 14 flights a week, explains Güvenç. "The airline has been flying to Dalaman for three years now. When they first started they transported 12,000 passengers annually. They are now planning to bring the number of passengers they fly to Dalaman to the nearly 100,000 figure. This airline is displaying a stable increase in passengers brought to our airport, region and country," stated Güvenç.

AN INCREASE IN BRITISH TOURISTS

Güvenç explained that due to the intense efforts exerted by firms such as 'Jet2.com, Easyjet and Monarch, the drop in numbers of British tourists over the past two years has now begun to reverse. "As of May, there is a 13.7 percent increase. This season has started off well. Turkey is a stable country and tourism is a project of peace. Therefore, tourists travel to place that are stable and in peace," said Güvenç.