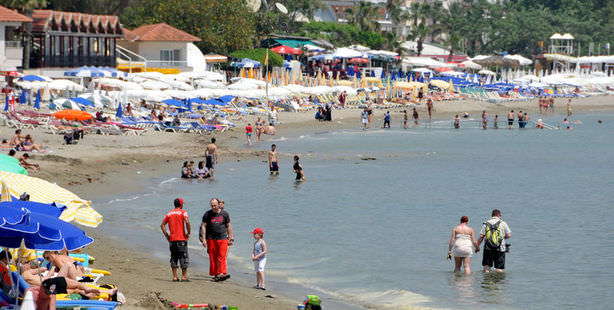 In the first five months (Jan.-May) of the year, Antalya hosted a whopping 2,667,952 foreign tourists. Figures released by the Mediterranean Touristic Hoteliers and Operators Union (AKTOB) show that the number of foreign tourists that arrived to Antalya during the January to May period this year showed an increase of 11.2 percent year-on-year reaching 2,667,952 compared to last year's 2,399,102 foreign visitors in the first five months of the year. During this timeframe, the highest number of visitors came from Germany, Russia, Holland and England. In the first five months of the year, 825,995 tourists visited Antalya from Germany, 688,007 tourists came from Russia, 180,104 visitors came from Holland and 121,524 thousand Brits visited the Mediterranean province.

The highest percentage rate increase in tourist figures was seen in Israeli visitors. Compared to 2012 figures for the first five months of the year, the number of Israeli tourists that came to Antalya between January and May, 2013, increased by 133.3 percent (17,403 tourists). During the same timeframe the number of tourists that visited from the U.S. increased by 119.1 percent, tourists from Estonia rose by 40.3 percent and visitors from Belarus also increased by 39.8 percent.

The number of tourists from Iran decreased by 63 percent compared to last year's figures for the same January to May period. Last year, 27,685 Iranian tourists came to Antalya between the months of Jan.-May. This year, 10,251 Iranian visitors came to Antalya in the first five months of the year.