Antalya's tourist arrivals on the rise 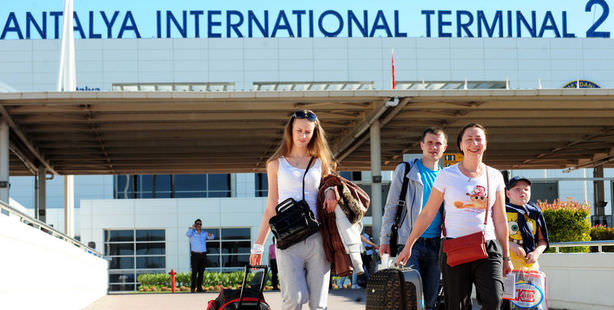 The number of tourists that visited Turkey's southern Mediterranean Antalya province increased by 9.9 percent in the first half of 2013, reaching a total 4,277,000 visitors.

The number of tourists that visited Antalya in the first half of this year increased by 9.9 percent compared to figures from the year prior, reaching a total 4,277,000 visitors.

According to figures from Mediterranean Touristic Hoteliers and Managements Union (AKTOB), tourist arrivals in Antalya reached 4,277,000 as of the six-month mark, increasing 9.9 percent in the January to June period of this year compared to the same timeframe the year prior.

Russia has brought in the highest number of tourists thus far with 1,268,000 visitors marking a 20 percent increase. Arrivals from Germany were second with 1,110,000 visitors showing an increase of 1.6 percent.

Arrivals from European nations such as the Netherlands, Britain, Switzerland, Norway and Belgium all showed a rise of ten percent or over, the figures saw a drop for visitors from nations France, Poland, Czech Republic, Iran, Romania and Hungary.

While the Israeli market is on a fast recovery, the number of tourists who visited in the first half of the year reached 24,000 which is a 140 percent increase compared to the same time period in 2012.

The number of airplanes that landed and took off on June 29 reached an all-time high for Antalya Airport with 937 airplanes. June also marked the highest number of tourists at 1.6 million to arrive to Turkey's touristic province.

On June 29th, a total 71,745 tourists arrived to Turkey's southern Antalya province and 71,225 visitors departed in a total record-breaking 937 flights. The 30-day airport traffic in June was also at a new high, with 1.6 million visitors arriving within the month.