Cappadocia visited by over one million tourists in six months 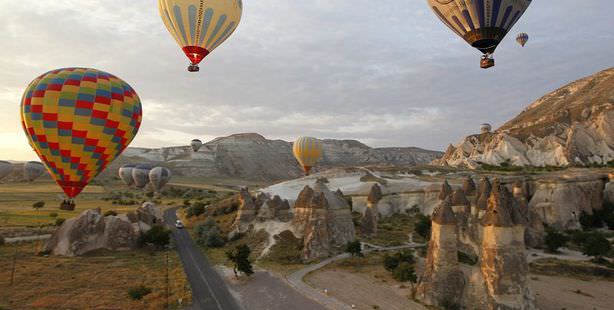 Over one million Turkish and foreign tourists visited Turkey's popular tourism destination Cappadocia in the first half of 2013.

The number of tourists to visit Cappadocia, one of the most popular tourism destinations in Turkey, has reached 249,061 in June and has exceeded one million tourists in the first six months of 2013.
Cappadocia, famous for its chimney rocks, hot air balloon trips, underground cities and boutique hotels carved into rocks, was visited by 1,209,451 Turkish and foreign tourists in the first six months of 2013, according to a statement released by the Governorate of Nevsehir.

In 2012, Cappadocia had 1,095,854 visitors, therefore this year's figures showed an 18 percent increase.
Tourists mostly visited the Goreme open-air museum, the Kaymakli underground city and the Derinkuyu underground city in the famous Cappadocia region, the statement said.

Hot-air ballooning and trekking are very popular in Cappadocia. Sedimentary rocks formed in lakes and streams and ignimbrite deposits that erupted from ancient volcanoes approximately 9 to 3 million years ago, underlie the Cappadocia region. The rocks of Cappadocia near Goreme eroded into hundreds of pillars and minaret-like forms. People of the villages at the heart of the Cappadocia region carved out houses, churches and monasteries from the soft rocks of volcanic deposits. Goreme became a monastic centre in 300-1200 AD.