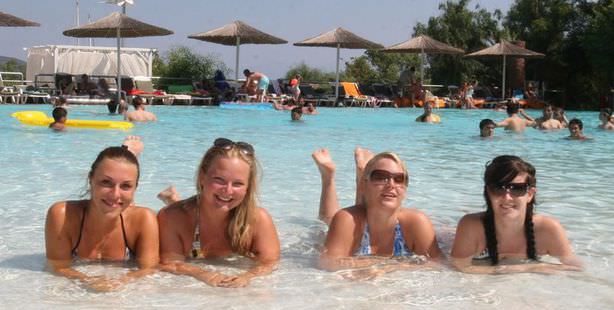 Minister of Culture Ömer Çelik announced yesterday that Turkey hosted 24 million tourists in the first eight months of the year. Five percent of that figure was day-trippers. The highest number of tourists arrived to Turkey from Germany and Antalya was their top destination.

Turkey's Culture and Tourism Minister Ömer Çelik marked a first yesterday by releasing Turkey's tourism figures over Twitter. According to the figures shared by Minister Çelik, a total 4,945,999 foreigners visited Turkey in the month of August, 2013 which is a 10.64 percent rise compared to figures from the same month the year prior. The number of foreign tourists that came to Turkey during the January to August period of this year reached 24,000,089, which is a 10.67 percent rise compared to the year prior.

While 1,279,833 tourists that arrived to Turkey within the first eight months of the year were day trippers, which computes to 5.3 percent of the total 24 million plus foreign visitors that came to Turkey, in August 6.37 percent of the four million tourists that visited the country came just for the day.

THE HIGHEST NUMBER OF TOURISTS ARRIVE FROM GERMANY

During the months of January to August in 2013, the highest number of foreign visitors arrived to Turkey from Germany, with 3,339,626 tourists. In second place is Russia with 3,104,869 visitors. Tourists from England came in third at 1,742,549 tourists. England was followed by Georgia, Bulgaria, Holland, Syria, Iran, France and Ukraine.

IN AUGUST WE HOSTED THE RUSSIANS

HIGHEST POINT OF ENTRY IS ANTALYA

During the January to August period, as well as for the sole month of August, the provinces which contained the border gates that saw the highest number of entries are as follows, from top to bottom, Antalya, Istanbul, Muğla, Edirne and Artvin.