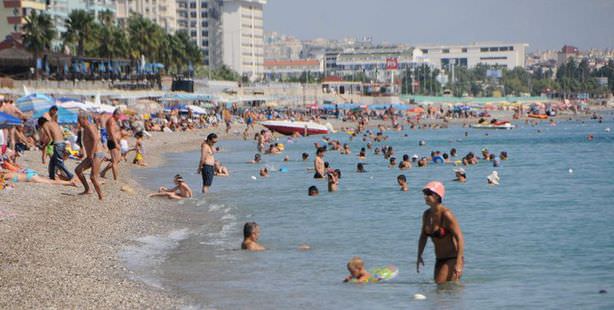 With weather temperatures cruising above season norms, the popular sea, sand and sun destination of Antalya is set to fill up with domestic and foreign tourists during the nine-day Feast of Sacrifice holiday.

Antalya is ready and waiting to welcome the flocks of tourists expected to spend the nine-day Feast of Sacrifice holiday in the popular vacation destination. According to Mediterranean Touristic Hoteliers Union (AKTOB) President Sururi Çorabatır, hotels in Antalya have already reached 100 percent full capacity. Drawn by the warmer weather temperatures this holiday season as well as a number of special events starring some of Turkey's most famous performers, Antalya is set to be one of the most popular destinations in Turkey for both domestic and foreign tourists this Feast of Sacrifice holiday.

2013 TOURISM HAS BEEN POSITIVE

AKTOB President Sururi Çorabatır says that the 500,000-bed capacity in the holiday destination is 100 percent full with both foreign and domestic tourists. Explaining that despite the negative developments in Turkey's surroundings, the country has still had a good year in terms of tourism, Çorabatır states, "Our country is surrounded in the region with negativity economic-wise as well as internal strife. 2013 was a positive year for tourism in Turkey. There has been a rise in visitors in Istanbul, Antalya and the Aegean region. Last year at this time, we had reached the ten million mark in Antalya. This year, when compared with 2012, there is an increase of seven percent."

Reminding that Ramadan was celebrated in a summer month this year, Çorabatır says that it resulted in reviving the domestic market. "Due to the fact that Ramadan fell during a high-season time, there was a revival in the domestic market due to the high number of foreign tourist reservations. This mobilization in the domestic market and especially providing easy transportation by air travel is an advantage for comfortably accessing a destination. Even though we have seen a drop in temperatures recently throughout the country, quite the contrary in Antalya the weather is still warm. All of the rooms we have put on offer for the domestic market are full. We are expecting to reach full capacity through the holiday," said Çorabatır.

THY TO OFFER DIRECT FLIGHTS TO ANTALYA FROM ALL PROVINCES

A PLETHORA OF FAMOUS PERFORMERS

Çorabatır also mentioned the wide number of musical performances lined up throughout the holiday and noted that performers enjoy coming to Antalya. The luxurious hotels in Antalya are rivaling one another by providing line-ups of popular performers. Ajda Pekkan, Ferhat Göçer, Ebru Gündeş, Erol Evgin, Sibel Can, Volkan Konak, Candan Erçetin and Gökhan Tepe are just a few of the famous performers confirmed for the upcoming Feast of Sacrifice holiday.