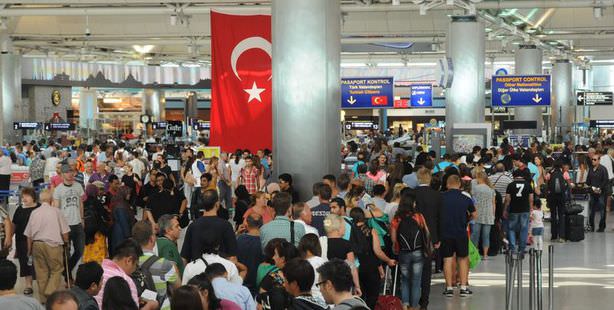 Holiday-goers reached an all-time high this past Feast of Sacrifice holiday, with five million travelers taking air flights over the nine-day Eid al-Adha. Antalya was the top destination for domestic flights, while Nicosia and Frankfurt took the cake for international flights.

Turkey's airports broke a record for hosting passengers this past Feast of Sacrifice holiday. State Airports Administration (DHMİ) Executive Board Chairman and General Director Orhan Birdal has announced that airports throughout Turkey hosted five million passengers and flew 37,225 planes. Birdal also shared that last year, during the same holiday timeframe, four million passengers traversed through airports in Turkey. Istanbul's Atatürk Airport had the highest number of passengers come through its doors during the nine-day holiday. From this airport alone, 1,454,000 passengers and 11,644 planes received services. On Sunday, October 20, the international Istanbul airport broke a record with 1,239 planes landing and departing its aprons and 147,366 passengers aboard them.

ANTALYA AND DALAMAN IN THE LIMELIGHT

TAV Istanbul General Manager Kemal Ünlü explains that throughout the nine-day holiday, an additional 179 flights were added, 98 of which were to international destinations. According to Ünlü, the highest number of additional flights were to Antalya and Dalaman. As for international flights, Nicosia, Frankfurt and Jeddah saw the highest demand. In terms of airlines, Turkish Airlines (THY) had the highest number of additional flights, at 64.25%. Onur Airlines followed at 24%, while Atlas Jet came in third at ten percent. On October 11, the start of the holiday, Atatürk Airport experienced their busiest day of the year by hosting 145,000 passengers, excluding those on transit flights.

Istanbul's Sabiha Gökçen Airport reached its highest figures in terms of daily passengers and flight numbers through the nine-day holiday. On the final day of the nine-day period, which was October 20, a total 78,618 passengers either arrived or departed through its gates. The number of planes that took off and landed on that day reached 599. Sabiha Gökçen International Airport Operator İSG's CEO Gökhan Buğday says, "Interest in our airport increases daily. We conduct flights to 90 international destinations and 33 domestic destinations."

This is a translation of an article originally written by Serdar Canipek.