Tourism revenue on the rise 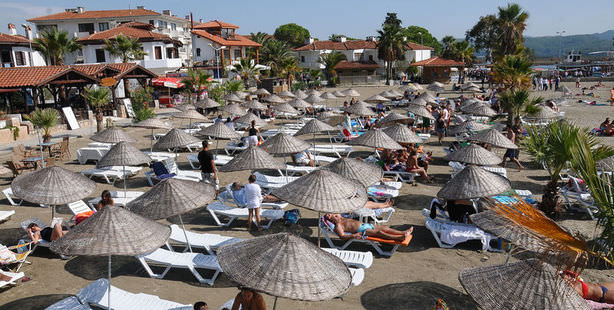 Turkey’s tourism revenue increased by 13.4% in 2013, reaching over $24.5 billion in the first nine months of 2013, compared to figures from the same time period the year prior.

The Turkish Statistics Institute (TÜİK) has released tourism industry figures for the third quarter, Jan.- Sept. 2013 period. Accordingly, at over $11.5 billion, Turkey's tourism revenue rose by 4.7 percent compared to the same timeframe the year prior.

While 79.6 percent of tourism income was obtained from foreign visitors, 20.4 percent came from Turkish citizens that reside abroad. At over $24.5 billion, tourism revenue from the first nine months of 2013 rose by 13.4 percent compared to figures from the same period the year prior.

AVERAGE PER PERSON EXPENDITURE WAS $721

Foreign tourist expenditure during the third quarter of 2013 was $667 on average per person, while the average spending of Turkish residents abroad was $1,001 per capita. Visitors were categorized into those who partook in personal trips and those who signed on to package tours. Accordingly, $1,065,100,000 consisted of personal trip expenditures, while $159,341,000 was spent on package tours.

The number of Turkish citizens that travelled abroad increased by 49.9 percent in the third quarter of 2013 compared to the same timeframe the year prior, reaching 2,067,830. The average expenditures per person in this category was $592.

A SYRIA ADJUSTMENT ON TOURISM DATA

The internal strife in Syria, which began in 2012, has led to a remarkable increase in the number of Syrians arriving to Turkey, however, a majority of those entries are not tourism-related. The Turkish Statistical Institute, which generally uses border statistics provided by the General Directorate of Security, has decided to disregard entrance and exit figures from a number of border crossings with Syria, especially Gaziantep's Kargamış, Hatay's Cilvegözü and Yayladağı, Kilis' Öncüpınar and Şanlıurfa's Akçakale gates, starting with the calculations for the third quarter of 2013.