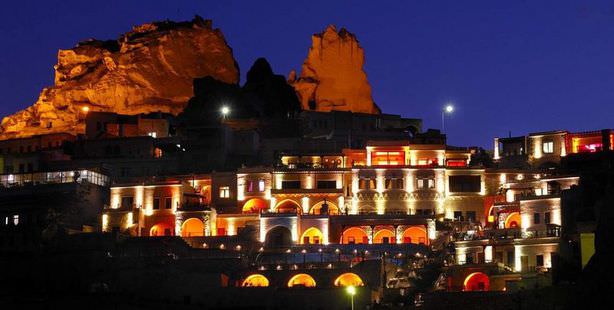 The Cappadocia Cave Resort and Spa, located in one of Turkey’s most important tourism destinations, has received two very significant awards: the ‘International Quality Gold Star in Geneva and an award for ‘Best Spa’ in London.

The CCR Hotels & Spa Cappadocia Cave Resort has not only beat out 157 firms from 78 different nations to be awarded a gold star in the 2013 Business Initiative Directions (BID) International Quality Star Awards in Geneva, the spa resort has now also been named 'Best Spa' at the 5 Star Hotel Awards ceremony held in London earlier in the week.

The Cappadocia Cave Resort & Spa, located in the Uçhisar district of the Central Anatolian Nevşehir Province, one of Turkey's most highly visited tourism destinations known for its fairy chimney stone structures and other natural wonders, received the award for 'Best Spa Hotel' at a ceremony held in London's famous and historical Grosvener House.

Cappadocia Cave Resort Executive Board Chairman Mustafa Çankaya states that the most important factors in being given this prestigious award lies in the fact that the hotel is the first-ever spa resort to be carved out of stone coupled by the high quality of service offered in this fantastic and unique location.