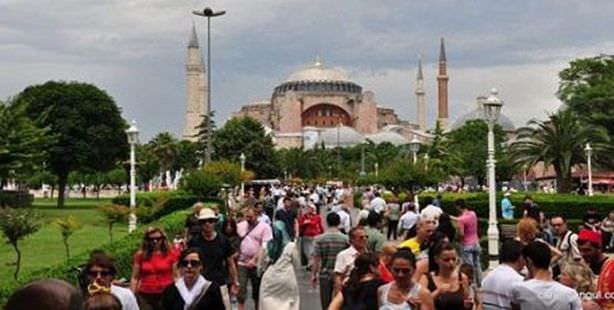 Culture and Tourism Minister Çelik has announced that the number of foreign visitors that came to Turkey between the first ten months of the year rose by 10.24 percent compared to figures from the year prior.

Culture and Tourism Minister Ömer Çelik has announced that the number of foreign visitors that came to Turkey between the months of January to October rose by 10.24 percent compared to figures from the year prior.

Minister Çelik shared a series of figures regarding Turkey's increasing tourism industry over his Twitter account, by writing that the number of foreign visitors that came to Turkey during the first ten months of the year totaled 31,757,624, which was a 10.24 rise compared to figures from the year prior.

The number of foreign tourists that visited Turkey during October alone reached 3,402,460, which is an 11.52 percent rise over the same period the year prior. Çelik also announced that Germany came in first for having the highest number of visitors at 19.94 percent (678,292 visitors), Russia came in second at 9.29 percent (316,187 visitors), while England came in third at 8.53 percent (290,072 visitors). Bulgaria and Holland were the nations to send the fourth and fifth highest number of foreign tourists to Turkey during the month of October.