Cappadocia is a favorite for destination documentaries 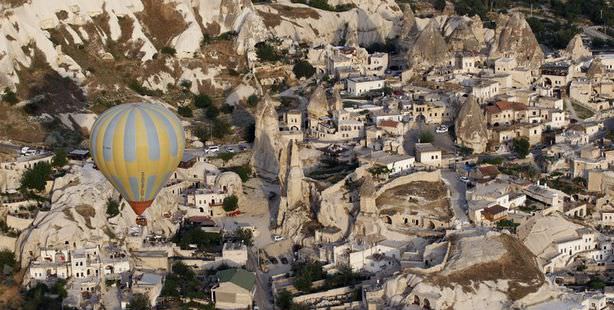 With one of Turkey’s most unique landscapes and history, Cappadocia has become a favorite destination for travel shows and documentaries. This year alone, 83 television channels from 23 nations have filmed documentaries and travel shows on the popular Central Anatolian region known for its fairy chimneys and underground cities, which span back to the 6th century BC.

The Cappadocia region, which is largely situated in the Central Anatolian province of Nevşehir is not only one of Turkey's most important culture tourism centers, known for its fairy chimney landscape, cave dwellings and historical underground cities which span back to the 6th century BC, has fast become a highly appealing filming location with 83 state and private television channels from 23 different nations having already shot documentaries and travel shows in the region in the first ten months of this year alone.

According to the Ministry of Culture and Tourism, so far this year the Foreign Affairs Ministry has received applications from 46 state and private television channels from 23 different countries to film in the historical Cappadocia region.

In addition to the Turkish state-run TRT television station, 36 private stations in Turkey have filmed the unique geological, historic, and cultural features of the Central Anatolian region this year alone. In addition to Turkey however, television stations from 23 different nations have also shot programs on this very special region. Nine television channels from Japan, six from South Korea, three each from China, Brazil and Malaysia, two each from France, Spain, USA, Azerbaijan and Singapore as well as a station each from India, Italy, Taiwan, Colombia, England, Serbia, Holland, Thailand, Germany, Australia, Bulgaria, Lebanon and the Turkish Republic of Northern Cyprus also shot travel programs in Cappadocia in the first ten months of this year alone.

In recent years hot-air ballooning has become highly popular in Cappadocia, while the Göreme region and open-air museum have always been high attraction points. Other areas where filming has focused in on include Uçhisar, Avanos, Ürgüp, Çavuşin, Mustafapaşa, Ortahisar, Kaymaklı, Özkonak, İbrahimpaşa and Zelve.