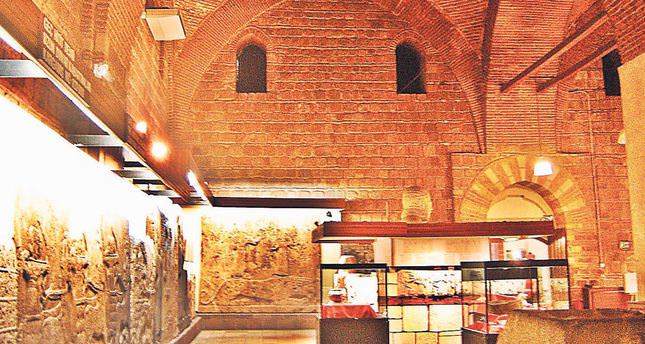 Recognized as having one of the richest collections in the world, the Museum of Anatolian Civilizations tells the story of the many civilizations that previously thrived in Asia Minor

Following the completion of the renovation works that started in 2010, The Museum of Anatollion Civilizations opened its doors to visitors on monday. Speaking during the opening ceremony, Culture and Tourism Minister Ömer Çelik was proud to see examples of Anatolian civilization in different parts of the world. "Our rich cultural heritage dispersed around the world encourages us to work more to display unique pieces in our museums," he said. Çelik pointed out that Asian Turkic civilization is represented under this roof. "I can see traces of Bilge Khagan and Tonyukuk, the biggest emperors of the Göktürks, ancient manuscripts in the old African city of Timbuktu and the Ottoman-era bridge Stari Most in Bosnia and Herzegovina," he added.

Recent foreign policies bring Turkey to international platforms, having a voice in different parts of the world. "People on the Kızılırmak [Turkish for 'Red River'] salute Turkic citizens living around the Danube River in Central Asia," Çelik said.

Turkey takes an important responsibility, raising awareness toward the protection of museums. The Ministry of Culture and Tourism is rather sensitive about museum restorations, offering high-quality practices with a capacity sufficient to compete with other countries. "The promotion of our cultural history through museums puts a big responsibility on our shoulders. We are aiming to transform museums into places where people can come any time they wish," he said.

Çelik further indicated that museums should be colorful and lively places. People are then able to experience joy and excitement at the same time. The ministry is willing to adopt an efficient vision to establish new and bigger museums.

The Museum of Anatolian Civilizations consists of the Ottoman Mahmut Pasha Bazaar and the Kurşunlu Inn dating back to the 15th century. The building was renovated based on modern perspectives. The domes of the museum were coated with lead. The wooden roof of the bazaar was repaired. The shop design was arranged in parallel with the five existing shops located on the eastern side.

All works of art are displayed in chronological order, starting from the Paleolithic Age to the East Roman Empire. There are also architectural animations and interactive applications. In 1997, the European Museum Forum announced that the Museum of Anatolian Civilizations was the best European museum. Minister Çelik referred to the contributions of Atatürk who regarded museums as the mirror of history. He stated that the Republic of Turkey would duly look after museums and the heritage of civilization.

The ministry has carried out renovation and maintenance work on 103 museums around Turkey. The ministry regulates a total of 190 public and 191 private museums. In addition, there are 41 newly opened museums. Minister Çelik opened the renovated museum with Deputy Minister Abdurrahman Arıcı and Undersecretary Özgür Özaslan. The museum officers informed delegates about the historical pieces. The opening ceremony took place with the participation of Doğan Acar, the head of the Provincial Culture and Tourism Directorate, Abdullah Kocapınar, the general manager of Cultural Assets and Museums, Mesut Cem Erkul, the general manager of the Cinema Directorate, Hamdi Turşucu, the head of the General Directorate of Libraries and Publications and Mustafa Kurt, the head of State Theaters.
Last Update: May 15, 2014 2:06 am
RELATED TOPICS