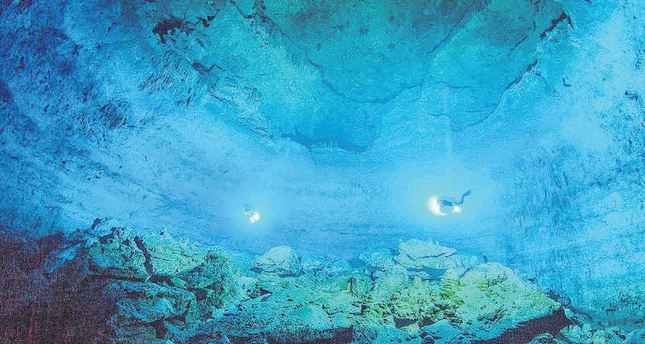 by May 17, 2014 12:00 am
A horrible day for a teenage girl perhaps 13,000 years ago - death in a Mexican cave - has turned into a wonderful day for scientists who have managed to coax important secrets out of the oldest genetically intact human skeleton in the New World.

Scientists said last Thursday genetic tests on her superbly preserved remains found by cave divers have answered questions about the origins of the Western Hemisphere's first people and their relationship to today's Native American populations.

These findings determined that the Ice Age humans who first crossed into the Americas over a land bridge that formerly linked Siberia to Alaska did in fact give rise to modern Native American populations rather than hypothesized later entrants into the hemisphere. Scientists exploring deep beneath the jungles of Mexico's eastern YucatÃ¡n peninsula discovered the girl's remains underwater alongside bones of more than two dozen beasts including sabertoothed tigers, cave bears, giant ground sloths and an elephant relative called a gomphothere. The girl - with her intact cranium and preserved DNA - was entombed for eons in a deeply submerged cave chamber before being discovered in 2007. The petite, slightly built girl - about 4 feet, 10 inches tall (1.47 meters) - is thought to have been 15 or 16 years old when she died. She may have ventured into dark passages of a cave to find freshwater and fallen to her death into what archeologist James Chatters of the firm of Applied Paleoscience, one of the leaders of the study, called an "inescapable trap" 100 feet (30 meters) deep - a bell-shaped pit dubbed Hoyo Negro, "black hole" in Spanish. Chatters said the chamber - more than 135 feet (40 meters) below sea level - was "a time capsule of the environment and human life" at the end of the Ice Age. The divers named her "Naia," a water nymph from Greek mythology. One of the divers, Alberto Nava, recalled the moment Naia was spotted - her skull resting atop a small ledge. "It was a small cranium laying upside down with a perfect set of teeth and dark eye sockets looking back at us,"

Nava said. The pit was dry when she fell but Ice Age glaciers melted about 10,000 years ago, inundating the caves with water. Tests determined she lived between 13,000 and 12,000 years ago.

Scientists long have debated the origins of the first people of the Americas. Many scientists think these hunter-gatherers crossed the former land bridge between 26,000 and 18,000 years ago and subsequently pushed into North and South America starting perhaps 17,000 years ago. But the most ancient New World human remains have confused scientists because, like Naia, they have narrower skulls and other features different from today's Native Americans. This led to speculation that these earliest New World people might represent an earlier migration from a different part of the world than the true ancestors of modern Native Americans.

But mitochondrial DNA - passed down from mother to child - extracted from the girl's wisdom tooth showed she belonged to an Asianderived genetic lineage shared only by today's Native Americans.