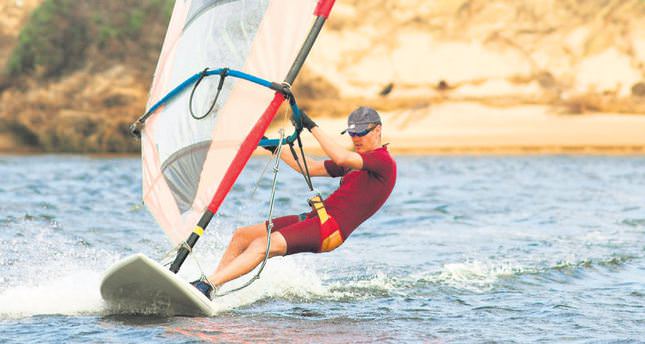 Summer often means fun, sun, surf and tan. What better location to do it all than Turkey's very own beaches and resorts

Windsurfing is a water sport that gives you the best of both worlds: surfing and sailing.

It requires a board which is often 2 to 3 meters long and has a rig connected to it by a freerotating universal joint and powered by wind on a sail. It is a sport that can be enjoyed as leisure or taken more seriously with freestyle moves by enthusiasts who adopt rules based on sailing.

Windsurfing gained popularity in the 1980s and was recognized as an Olympic sport in 1984, but licensing requirements deterred enthusiasts. The restructuring and reform of the equipment used helped the sport to modestly revive.

Considering summer is just around the corner, and Turkey's Aegean shores offer some of the greatest beaches and bays in the Mediterranean, places such as Alaçatı in Çeşme, Bodrum, Datça and Antalya have ideal conditions for windsurfing.

Alaçatı Beach resort Opposite the Greek Island of Chios, Alaçatı, also known as the St. Tropez of Turkey is one of the prime locations for windsurfing with its turquoise water and consistent winds which last for approximately 300 days of the year. The sport is supported by the area's boutiques and cafes. Alaçatı is also famous for its architecture, vineyards and windmills.

The extreme wind conditions were originally a deterrent for tourists but are now Alaçatı's biggest attraction. Aside from windsurfing, other places that can be visited are Ephesus, Pamukkale, Troy and Assos.

Bodrum Strong wind conditions and warm waters have made Bordum popular during July and August for windsurfing holidays. Three of its best locations are as follows:

Bitez is only 15 minutes from the center of Bodrum and suitable for windsurfing during late May and early November. It is most suitable for beginners due to its offshore winds and flat waters.

Akyarlar on the other side of Turgutreis is a great location for all levels of windsurfers from beginners to advanced. Fener Beach makes it an ideal location because the wind is squeezed between Kos (or Cos) Island. The wind is cross shore with nice swell outside the bay.
Kadıkalesi is located between Turgutreis and Gümüşlük and is one of the most favored locations for windsurfers on the Bodrum peninsula.
The light winds in the morning which become unpredictable later on and its shallow waters make it better suited to the more advanced windsurfer.
Last Update: Jun 03, 2014 1:24 am
RELATED TOPICS