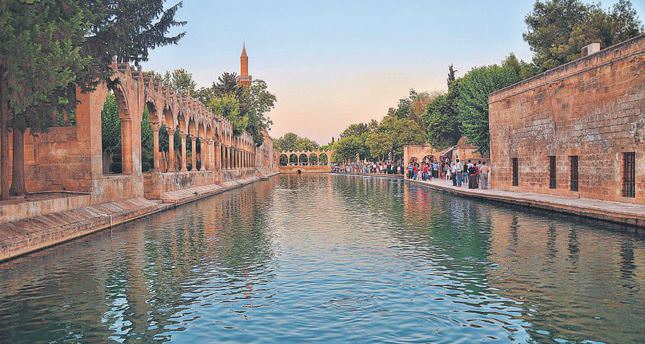 Listening to poetry with Syrians, some of whom have been living in Turkey for years, shows the healing power of language and sharing

URFA — This weekend, I was in Urfa, the southeastern province of Turkey, famously referred to as "the city of prophets," but also known in history as Edessa. A poetry event the fifth annual International Balıklıgöl Poetry Night was enjoyed by both poets and locals. Although poets now have the opportunity to express themselves through Twitter, writing and reciting poetry is on a considerable decline when compared to the 20th century. While in the rest of the country, the traditional affinity for poems is waning, the people of Urfa seem to have lost none of their affection to poetry. Therefore, the Urfa Metropolitan Municipality, the Anatolian Writers Union and the municipality of Eyyübiye district annually organize poetry nights to promote poetry and new poets. I asked Anatolian Writers Union Chair Necdet Karasevda why they held such an international event in Urfa instead of Istanbul. "There is an oral tradition in Urfa. The traditional "sıra gecesi" (sıra night) activities, where people play instruments and others sing along by turn, are still common here. In Urfa, you can see some people who do not know how to read and write but can recite poetry by heart. Poetry and poets are an integral part of Urfa. The city has also raised many poets. So, poetry accords with Urfa the most," he said.

Urfa, which dates back to 13,000 B.C., has a truly poetic atmosphere uniting Christianity, Judaism and Islam. In 2007, the city suddenly made headlines around the world because of the archaeological excavation work in the Göbeklitepe district. The Göbeklitepe site, dating back to the early Neolithic period, has deconstructed all our textbook information regarding the history of humanity. We all knew that humans began engaging in agriculture and as a result adopted a sedentary life after becoming hunters and collectors. However, in Göbeklitepe, a temple built by a hunter and gatherer tribe was discovered although no sign of agriculture was found. It is possible to see traces of many civilizations in Urfa, ranging from Sumerian to Byzantine, Sassanid, Persian, Abbasid and Ottoman empires. Organizing the international poetry event also has significance in this regard. In Urfa, the crossroad of civilizations, the poetry night welcomed guests from Asia, Africa and Europe. Along with these guests, Urfa locals too had the chance to listen to poetry recited in five languages in an amphitheater.

The region hosted countless people since the dawn of history and but the newest arrivals were forced out their homes. Currently, there are 300,000 Syrian refugees in Urfa due to the Syrian civil war. Syrians also showed great interest in the event. Listening to poetry with Syrians, some of whom have been living in Turkey for years, shows the healing power of poetry and sharing. In a speech he made during the event, Eyyübiye Mayor Mehmet Ekinci said the duty of the municipality was not just to develop infrastructure; they also must provide support for all culture and art activities in Urfa. Ekinci paid great attention to guests and supported poets by reciting a poem by Cahit Sıtkı Tarancı, "Memleket İsterim" (I Want a Country). Cuisine During the two days I spent in Urfa, I was also amazed by Urfa's cuisine as much as the poetry event. Urfa has a rich and unique cuisine combining tastes from Turkish, Kurdish and Arabic dishes.

The succulent kebabs served in each meal here are a must-try. No one should say they have eaten a kebab without trying those served in Urfa. With its local coffee "Mırra," which is even stronger than espresso, Meyan sorbet, various types of "mezes," warm people, strong oral poetry tradition, "sıra nights" and a significant heritage of humanity, Urfa should be on the travel list of all who want to enjoy the delights of the southeast.