The hidden treasures of Turkey's west call for you 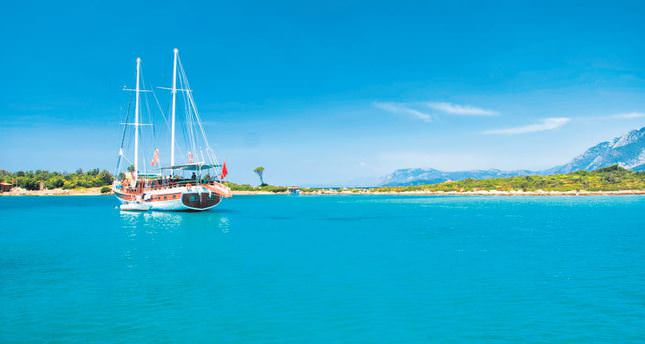 We all want some serenity, fun and turquoise waters on our travels and Turkey's Muğla meets these expectations as it embraces visitors with its little town and hidden islands

If someone asked where I would like to live forever, I would definitely say "Muğla," for its endless beauty and hidden gems offer more with each passing day. Turkey's western city of Muğla may be considered a place where time stands still and allows you to enjoy endless serenity and peace.

This magical city embraces it visitors and marks their hearts with its perfect combination of history, nature and tranquility. Muğla is not only well-known for its highly touristic spots such as crowded beaches and its clubbing scene, but also for its tranquil and peaceful settings which are hidden and waiting to be discovered. Renowned for its Aegean bazaars, Muğla brings shopping and taste together. Thanks to its fruitful landscapes, you can find organic products and medical herbs in the little townships of this city.

Nested between steep mountains and turquoise Aegean water, Muğla is one of the most touristic destinations of the country, including sites such as Fethiye, Bodrum, Marmaris, Datça and Türkbükü, which are all heavens on the earth.

In addition to these touristic towns, there are lots of islands belonging to Muğla, but it is unfortunate that most of these beautiful islands are overshadowed by the towns that experience larger tourist influx.

In this article, you will find descriptions of the little islands of Muğla in the Aegean Sea, and I assure you that all of these untouched islands will be a little secret that you will want to keep only to yourself. You can rent a boat in the touristic towns of Muğla to reach these islands yourself or alternatively there are boat trips that will guide you to these beauties.

To discover the unknown, destination: Salih Island Salih Ada, a little island that is not as wellknown as the others in Aegean Sea, should be marked as the first destination for those who are interested in history and also for those who are looking for some tranquility, and may be the best option among all those islands for such purposes.

With pine grove on its hills and olive groves on its shores, Salih Ada is an island where you can lie down and enjoy the relaxing voice of serenity. You can also explore the remains of Kayranda, an antique town on the island and the hidden bays of the island, but a little tip: the best one is the bay on the southeastern side of the island. What makes this island quiet and open to exploration is that there are only a few islands and places on the island. You can reach this island, which is suitable for a one-day visit, by boat tours that depart from Güvercinlik village in Bodrum town.

To swim in turquoise waters, destination: Kamelya Island : If you visit Muğla, Kamelya Island will be probably the first island that the tour boat takes you to thanks to its completely different rock structure compared to other parts of Turkey. Another reason that marks this island as the most preferred island off the Aegean coast is its turquoise, clean waters and believe me or not, you can see the bottom of the sea from 30 kilometers above as you swim in the clean water. There is also a monastery on the island which requires a small climb.

During your visit to Kamelya Island you will probably meet lots of visitors that fell in love with this fascinating island before and cannot prevent themselves from returning again and again. Every visit to this island turns into another memor y of you swimming with the lingering thyme scent of the island.

To gild the lily, destination: Cleopatra Island: Cleopatra Island, which is also known as Sedir Island in Turkish, is near Muğla's touristic town of Marmaris. Named after the beautiful and exotic queen of Egypt, Cleopatra looked for eternal beauty on the sands of this island.

Cleopatra is still among the top 10 destinations in the country and the legend says that the natural landscapes and turquoise water of the island put a spell on her. Cleopatra Island is unique and under protection due to its sand formations which are made from dissolving seashells. The government ruled that removing any sand from this unique place is illegal which is why visitors are not allowed to carry beach towels and bags on to the shore. It is also strictly required to take a shower before leaving the island. What makes this island special apart from its unique and magical sand which allegedly amazes visitors, are its numerous historical structures waiting to be visited. Dating back to the Greek Spartans, there are Greek and Roman remains on the island.

To walk on water, destination: Tavşan Island Tavşan Adası, or Rabbit Island in Turkish, is a little island that visitors can reach by walking on an antique sunken causeway, which was built during the Hellenistic period. Because of this it cannot be fully classified as an island, but it is definitely a different experience to swim to the island. Rabbit Island separated by the two beaches of Gümüşlük, a little town in Bodrum, Muğla, is named after the rabbits that live on the island which still run wild. Legend says that once the island was a common destination for the King of Halicarnassos Mousolos and his beloved Artemisya. It is also possible to walk to the island through the sea because it is only knee-deep. If you visit Gümüşlük, be sure that you experience walking to the island and take photos of the beautiful surroundings, sunbathe or dive into the clear waters. You can also spend a night in Gümüşlük and taste probably some of the freshest fish
in the city.
Last Update: Jun 21, 2014 1:06 am
RELATED TOPICS