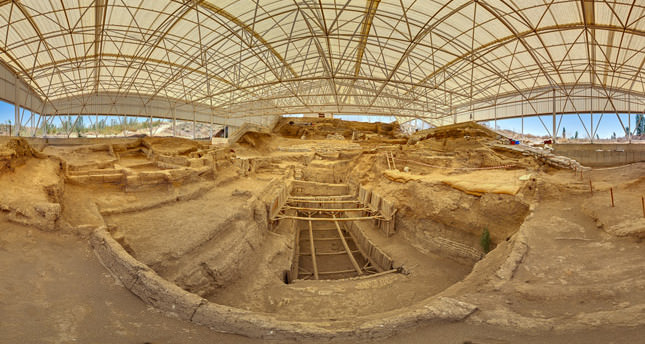 With its UNESCO World Heritage Sites, historical remains, natural wonders and turquoise waters, Turkey calls on visitors looking to experience a holiday that is utterly out of this world

Acting as a bridge between Asia and Europe, Turkey has been the world's precious gem since ancient times. As a country that hosted scores of civilizations and nations on its lands, Turkey still carries the scars of those civilizations.

Turkey has 13 properties inscribed on the UNESCO World Heritage List, 54 nominated properties on the UNESCO Tentative List, and 11 elements on the list of the UNESCO Intangible Cultural Heritage of Humanity, including Turkish coffee and the arts of the Meddah.

Even though the country is renowned for its crowded beaches, tourist destinations that attract millions of tourists each year, entertaining nightlife and, of course, its rich cuisine, including different tastes from east to west, the historic beauties and remains in the country are also waiting to be discovered by curious and adventurous visitors.

If you are planning to holiday in Turkey this year, take a look at these world heritage sites where you can go mountain climbing, visit the earliest settlements of the Neolithic Age, experience wellbeing springs or swim in a historic town.

Located in the Cumra district of Turkey's central Anatolian city of Konya, Çatalhöyük is among the oldest settlements of mankind in the Neolithic Age. Dating back to 7400-5200 B.C., Çatalhöyük is considered the largest and bestpreserved ancient site of all time. Çatalhöyük was included in UNESCO's World Heritage Sites in 2012, and since then, measures to protect the ancient remains have been improved. Standing as proof of the development of civilizations and social life, the place includes houses, which are decorated with wall paintings, sculptures and other features of the Neolithic Age's housing culture.

Those who want to discover life in ancient times can see the site and houses with their interior and exterior designs. To understand ancient social life, culture, religion, agriculture and domestic life, Çatalhöyük embraces all of history embedded in it. In Çatalhöyük, you can spend a day exploring the houses and later you can visit the Konya city center, which is one of the largest provinces in the country and known for Rumi's doctrines.

Known as Hierapolis, Pamukkale (cotton castle in Turkish) is accepted as a gift of nature for those who visit. Pamukkale was included on UNESCO's World Heritage List in 1988 based on natural and cultural criteria. Being famous for its hot springs and travertines, terraces of carbonate minerals left by flowing waters, Pamukkale is located in western Turkey and calls on those who are looking for a relaxing experience. There are dozens of remains from the ancient city of Hierapolis and Greek monuments around the city. With remains from different civilizations, natural wonders and pure white travertines formed from hot calcium-filled mineral waters, Pamukkale has three different thermal regions - Sarayköy, Karahayıt and Gölemezli - that are accepted as health-giving places with springs and mud baths. In Pamukkale, you can spend a day or just a few hours to have a completely organic cure for your skin diseases and find an opportunity to visit the amazing travertines that enable you to see the kind of beauty that nature is able to create.

Kekova, in the southern city of Antalya, is a region that boasts mesmerizing islands. Being among the nominated properties on the UNESCO Tentative Lists, Kekova includes historical remnants of Lycian settlements, including Teimioussa and the sunken city of Simena, bays and islands. The Kekova region was declared a Specially Protected Area in 1990 to protect the region's nature, culture and geography. In ancient times, Kekova was a small fishing village. Today, hosting different civilizations, Kekova is one of the top tourist destinations in the country. As a result of geological movements of the island, the city is interesting, as half of the city is under water while half of it is above. In addition to its cultural features, Kekova has an undulating coastline, hydrobiological features and mesmerizing beauty. Kekova is also marked as the only place in the region where you can witness flying fishes. If you want to find a peaceful atmosphere that combines history, luxury and nature, this Lycian settlement will embrace you with all its beauty.

Described as an outstanding universal treasure, Mount Nemrut is a UNESCO World Heritage Site due to the statues that were erected on the mountain in ancient times. There are numerous large statues, which are assumed to be royal tombs from the first century B.C. on Mount Nemrut. The mountain is one of the best places to view such glorious history. Every year hundreds of tourists come to the mountain to see in person the artistic achievements of the Hellenic period and fascinating beauty of the monumental sculptures. While the statues are magnificent at any time of day, the mountain offers all its beauty at sunset. When you see the sun setting on the mountain, you will be mesmerized by the landscape. Don't forget to take your best cameras along if you head to Mount Nemrut. After your visit to the mountain, you can spend a night in the city of Adıyaman. The best times to visit this mountain is between April and October. From Adıyaman to the mountain, there are trips by bus and overnight tours running out of Kahta, a town in Adıyaman.
RELATED TOPICS