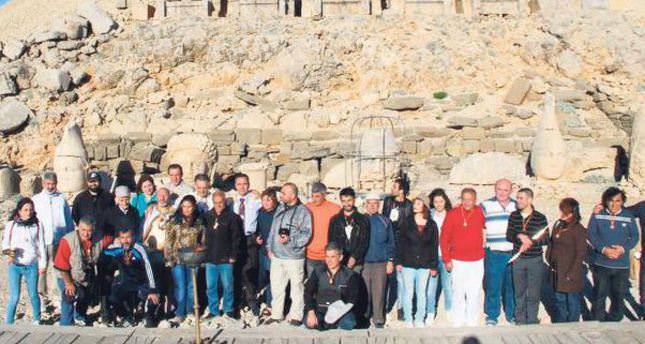 by Jul 05, 2014 12:00 am
A group of 34 Armenian tourists held a religious ceremony after they watched the sun rise over the spectacular Mount Nemrut in Adıyaman. As a part of their Anatolia tour, the pagan tourists arrived to the district of Kahta, where Mount Nemrut is located. The group climbed to the top of the mountain reaching up to 2,606 meters. Armenian people residing in Kahta accompanied the tourists.

The religious ceremony led by a priest known as a "kurm" started with heating a number of knives in a special bowl. It ended in roughly an hour after the rites were completed, and then the participants were offered some tastes of traditional Armenian cuisine. In his statement to reporters, tourist Gagik Hayrabetyan said Mount Nemrut and Van province are two important sacred places for Armenian pagans. "For us, Mount Nemrut symbolizes peace. We will continue our religious ceremonies every year on this divine landscape," he said.

The group includes people from different professions such as businessmen, authors, soldiers, doctors and musicians. The Armenian tourists wished peace for all mankind. As one of the most popular travel destinations, Mount Nemrut is the temple-tomb and house of the gods built by the late Hellenistic King Antiochus I of Commagene.
RELATED TOPICS