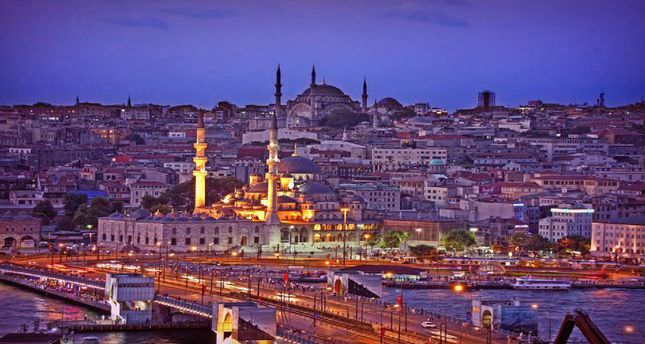 by AA Jul 11, 2014 12:00 am
The number of visitors to Turkey's commercial and cultural hub, Istanbul, will increase to 11.6 million in 2014, according to the Master Card Global Destination Cities Index, beating cities like Barcelona, Rome and Tokyo. Turkey's largest city has shown strong growth in the international visitor arrival numbers after welcoming 11.6 million tourists in 2014, a report claims.

Istanbul is currently seventh on the list of top destinations for international travelers, beating famous cities like Barcelona, Rome and Tokyo according to the annual Master-Card Global Destination Cities Index. The index, pointing to continued strong demand in air travel, both for business and personal journeys, named Istanbul as the third global destination city in Europe after London and Paris. Currently aiming to get more tourists than Paris in 2016, the city was visited by 11.6 million people in 2014.

Rounding out the top five cities are London, Bangkok, Paris, Singapore and Dubai, which are benefiting not only from a flock of international travellers and an expanding middle class, but also from innovations in luxury. According to the Turkish Statistical Institute's report for the first quarter of 2014, tourism revenue reached $4.8 billion (TL10.2 billion) across Turkey, an increase of 3.4 percent compared to same period of 2013, with 76.2 percent of tourism revenue coming from foreign visitors. Foreign tourists spent an average of $877 each during the first three months of 2014. The Master Card Index ranks cities in terms of the number of their total international arrivals and the cross-border spending by these same visitors in destination cities.
Last Update: Jul 11, 2014 11:01 pm
RELATED TOPICS