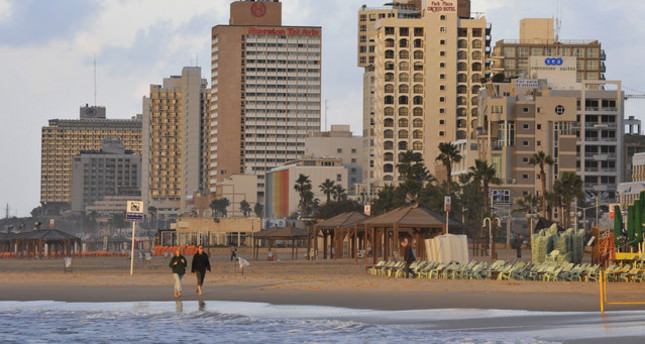 by Jul 22, 2014 12:00 am
Israeli tourism was on track for another record year in 2014 until a barrage of rocket fire from the Gaza Strip and images of citizens rushing to shelters triggered a wave of cancellations.

The Gaza war, in which Israel is now waging a ground offensive to try to destroy Palestinian tunnels and missile stocks, is set to wipe at least half a billion dollars off the Jewish state's economy this year, industry bodies estimate.

More than 3.5 million visitors came to Israel in 2013, pumping some 40 billion shekels ($12 billion) into the economy. Thanks to new hotels and an eye-catching papal visit in May, officials had expected a 10 percent boost this year, with 1.9 million visitors arriving the first six months.

"Most hotels and airlines say the year is lost. The worst possible time for a war in Israel from the vantage point of tourism is the summer," said Mark Feldman, chief executive of the Jerusalem travel agency Ziontours.

Most of the remaining passengers flying to Israel are returning Israelis and solidarity missions by Jewish groups.
Feldman said he has received no new reservation requests for September, adding: "Every day the war continues, we lose a week of future bookings."

Israel launched an offensive against Hamas fighters in Gaza on July 8 after cross-border rocket strikes by militants intensified.
The conflict - in which more than 500 Palestinians, 18 Israeli soldiers and two Israeli civilians have died - shows no sign of abating. Sirens wailed in Tel Aviv, the main coastal city, on Monday warning of approaching rockets, and heavy fighting was reported in and around Gaza.

Tourism accounts for as much as 6 percent of gross domestic product in Israel, which is already facing weakening growth. Beyond the numbers, Israel also counts on tourism as a critical image booster and bulwark against world criticism of its policies towards the Palestinians.

The Israel Hotel Association (IHA) estimated $500 million in lost tourism revenue - including $100 million for hotels - in the third quarter because of the fighting. That translates into a 35 percent drop, or 280,000 fewer visitors than expected, it said, citing preliminary data.

Delta Airlines, United Airlines,Germany's Lufthansa, Air France and Air Canada have also canceled flights to Tel Aviv amid the increasing violence. Dutch airliner, KLM, also cancelled Flight 461 from Amsterdam to Tel Aviv because of the unclear situation at and around the airport.

The Tourism Ministry said that while the number of visitors was down, there has been no panic or mass departures.

"Based on previous experience, (we are) optimistic about the ability of the industry to bounce back to routine," it said in an emailed statement.