A girl's day out at Turkey's female-only beaches 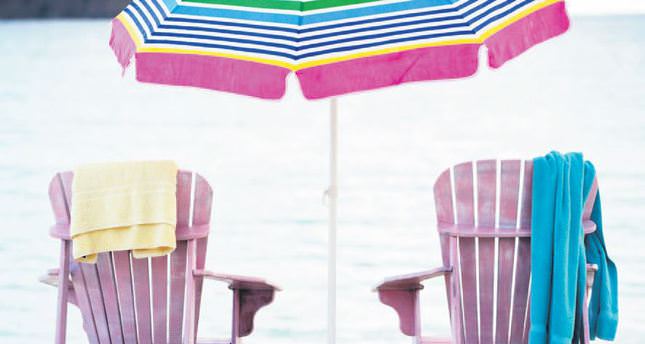 by Nur Özdil Jul 25, 2014 12:00 am
Women-only beaches used to be the preserve of headscarf-wearing women. Instead of swimming in a hashama, a piece of modest swimwear worn on public beaches, women who adopted the Islamic way of life preferred to spend time with their friends on womenonly beaches where they could wear whatever they liked.

As time has passed, these beaches have become popular among all women who are either not comfortable wearing bathing suits in public or who are disturbed by the constant gazing from the opposite sex.

After the Metropolitan Municipality of Antalya recently announced the opening of a women-only beach, people objected claiming the move was unnecessary. The reason for their objection was that women-only beaches are a part of the Islamic lifestyle. Yet, the odd thing is that protesters overlooked is that having an exclusive beach for women does not affect Antalya's 640-kilometer-long coastline. The beach, which will open despite the protests, is located in the Sarısu Recreation Area near the Konyaaltı beach. The beach will offer its services to all women in Antalya, without making any distinction, after the opening ceremony on Saturday.

The Mayor of Istanbul Metropolitan Municipality, Kadir Topbaş, announced that the 403-kilometer coastline is suitable for swimming, 28-kilometer of which has already been turned into beaches. Comparing the number of their coastlines and beaches, Istanbul has more womenonly beaches than Antalya.

Still there remains a lack of options for women who want to get away from the city's chaos and cool off in a blue sea, even if just for a day. Sarıyer Altınkum Beach, Florya Menekşe Beach and Beykoz Poyrazköy Beach are the only women-only beaches in Istanbul, all of which are well connected to the rest of the city. Food and beverages are not a problem since people can bring their own food and have a picnic. Facilities at the beaches also provide food and drinks.

Although Turkey is a country with abundant lakes and coastlines, there are, strangely, only a few beaches allocated for women. Some of them are located outside of Istanbul, including Akçakoca, Marmara Ereğli, Esenköy and the Avşa Island. The more important problem is that most of them are situated in rocky regions with dirty water. Also the quality of women-only beaches is generally low. Since there are fewer of them, the beaches are also very crowded due to high-demand. The Kocaeli Municipality previously separated the public beach with a folding screen for women. However, this practice was protested against with people writing the "2012 model shame wall" on it. Last week, a group of women residing in Antalya reacted against a new women-only beach.

Some people denounce women-only beaches as a place where women are separate from men, a practice - they believe - is far removed from modern life.
Last Update: Jul 25, 2014 1:09 am
RELATED TOPICS