All roads lead to Turkish gems this summer 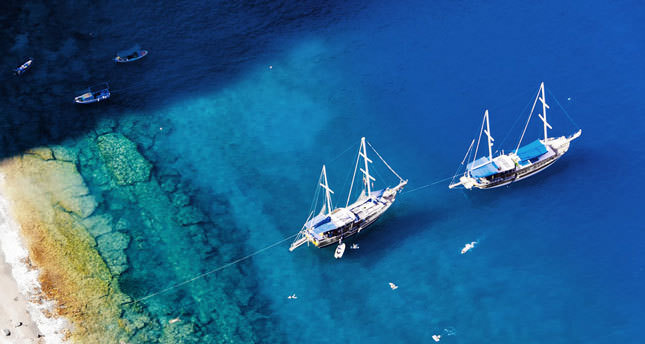 Known as some of the hottest spots where tourists can enjoy serenity and entertainment at the same time, beaches on Turkey's coasts await those who want to experience a holiday that will be remembered for a lifetime

With 383 beaches, 21 marinas and 13 yachts accredited with Blue Flags, Turkey has bumped France from its throne to become the third country, following Spain and Greece, to have the highest number of Blue Flag beaches.

Most beaches on the Turkish Riviera see a huge influx of tourists, especially sunbathers during summer. Even though this country hides its gems and is renowned for crowded beaches, entertaining nightlife and busy coastal resorts, visitors only know certain tourist destinations. For a moment, forget the crowded beaches in the well-known tourist spots such as the western cities of Muğla, the southern city of Antalya, and İzmir in the west whose beaches are in the public eye because just a short drive off the beaten track await virgin beaches.

If what you are looking for this summer is reclining on the sand on unspoiled Turkish beaches while your toes touch the sea, then keep reading, because I will share hidden beaches that are waiting to be discovered in Turkey.

Patara on the Mediterranean coast

Patara Beach has been voted as one of the top beaches in the world by Times Online, Best of 2005 and is known as the "widest beach of the northern Mediterranean." Considering its 12-kilometer stretch of white sands, it is not so difficult to understand why this beach is the best one to experience heaven on earth. Located in Turkey's southern tourist spot of Kalkan/Kaş, Patara Beach offers both the vivid blue waters of the Mediterranean and the ancient site of Patara to show how history and nature can be mixed together in one pot. The beach is believed to be the birthplace of Apollo, and includes the ruins of western Mediterranean harbors that host ships from all over the world. The beach is also one of the few that loggerhead sea turtles visit to lay their eggs between May and October. Because of this, visitors will see caution signs that protect eggs during their stay.

Furthermore, the strict restrictions for building are what helps make this beach so special and a natural wonder. There is only one café at the beach, which is run by locals, but no big, overbearing buildings at all. There is no development, no water sports, only pure tranquility and peace along the coastline of Patara.

How to get there: The beach is only a 20-minute walk from the Patara village, but as another option, you can take minibuses to reach the beach. There are also beach service buses that run from Kalkan and
Kaş.

To experience the eternal flames: Çıralı on Mediterranean coast

Separated from the renowned Turkish city of Olympos only by a rock, Çıralı is one of the most beautiful secluded beaches along Turkey's Mediterranean coast, and shares Olympos's Hellenic ruins and historical site. What makes Çıralı famous is its flaming rocks (yanartaş), which are natural flames that burn constantly located on a mountainside at the north end of Çıralı village. These eternal flames have been burning methane gas from vents on the rocky slopes for thousands of years. Known as a landmark for ancient mariners passing through the Mediterranean Sea, the flames around Çıralı have died down a bit since antiquity.

Even though it is less remarkable than what the ancients saw, it is still an incredible natural wonder that attracts visitors. During your stay at this natural wonder, don't forget to look up at the sky while lying on the beach. You will be enchanted by the Milky Way gliding right above you just like in the movies, but with a little difference-you get to see it directly for yourself.

How to get there: There are minibuses from Antalya's otogar (main station for intercity buses). After hopping off at the junction on the upland section of the main coastal highway of the region, there are minibuses you can catch that depart fairly frequently. Çıralı and Olympos are only half a kilometer away from each other, but if you do not want to hop on and hop off during your visit, you can rent a car, and reach the two beaches by discovering other natural wonders along the way.

To fill your lungs with oxygen: Akbük Bay on Aegean coast

Nested between the crystal clear waters, spectacular protected mountain forests, and olive groves of the Aegean and Mediterranean Seas, Akbük Bay, which means White Bay, is a special protected environment area where building is not allowed. That is why this bay may be the most untouched bay in Turkey.

Historically, Akbük Bay was a small fishing village that was off the beaten track for fish lovers. Although more and more visitors are discovering it every day, what makes this bay special is that it has the lowest humidity and highest oxygen ratio in the entire country. Recognized internationally with a Blue Flag, the harbor in the bay is renowned for its serenity and peaceful atmosphere. The bay boasts brilliant white sands like no other, and the sea does not quickly deepen no matter how long or far you swim.

There are camping sites and pensions for those who want to spend a night at this mesmerizing location. You can also visit Altınkum, (Gold Sand), during your stay. It is approximately 20 minutes away by car, and offers boat trips and tours for visitors.

How to get there: Akbük Bay is just 50 minutes away from Bodrum Airport, which is in one of the most well-known tourist destinations in Turkey. Local minibuses run regularly throughout the day. The buses stop at the complex approximately every 15 minutes. Akbük Bay town center, harbor, and main beach are only five minutes by local bus. You can also rent a car, and reach the bay while taking photos of the
sites along the way.

To feel the summer breeze: Adrasan on the Mediterranean coast

With priceless landscapes dominating Kemer on the Mediterranean coast of Turkey, historical wonders, and uncrowded beaches, the Adrasan district in southern Turkey is one of the most hidden secrets in Antalya. An escape from the bustle of Antalya's city center, Adrasan has its own entertainment. Bungalow houses certainly don't have the luxurious quality of expensive hotels, but they offer guests a friendly, quiet environment.
Most of the bungalows offer half-board, but are ready to meet all your demands during your stay. A boat trip is the perfect way to explore the sea and islands surrounding Adrasan and the city of Antalya. A boat tour costs about TL 40 ($18.65) with lunch included. While on the boat, ask the captain to take you to the "wellness spring"-its water is believed to have healing properties and the ability to cure illnesses.

If you are looking for an adventure, you can jump off the rocks when the boat trip takes you inside the Fosforlu Cave (Phosphorescent Cave). This majestic cave takes on different colors in the moonlight, and sometimes in the day as well thanks to its geological structure.

How to get there: There are minibuses from Antalya's bus terminal (main station for intercity buses). After hopping off at the junction on the upland section of the main coastal highway of the region, there are minibuses that depart fairly frequently to Adrasan. You can also rent a car to discover both Adrasan and the little bays around the town.
Last Update: Aug 02, 2014 1:57 am
RELATED TOPICS