Driving into the heart of the Turkish Riviera 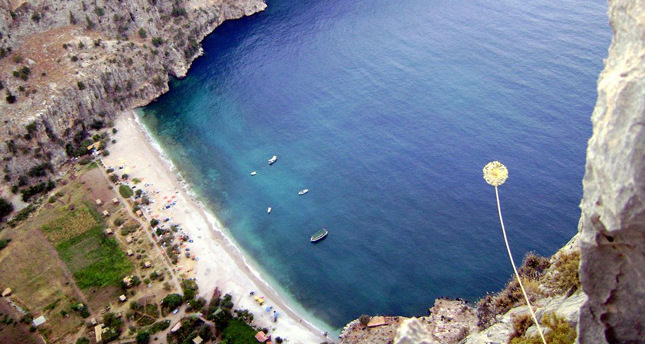 Turkey calls those who want to catch the last days of sunshine, so if you need to take a holiday before summer ends, it is the perfect time to see the heavens of Turkey

Turkey has some of the world's most famous Aegean and Mediterranean Sea resort cities within the provinces of Izmir, Muğla and Antalya. With 383 beaches, 21 marinas and 13 yachts accredited with Blue Flags, Turkey has bumped France from its throne to become the third country, following Spain and Greece, to have the highest number of Blue Flag beaches. Most beaches on the Turkish Riviera see a huge influx of tourists, especially sunbathers during summer.

If what you are looking for this summer is reclining on the sand on unspoiled Turkish beaches while your toes touch the sea, then keep reading, because I will share best touristic destinations that are waiting to be discovered in Turkey.

However, many of these provinces' touristic cities are located quite far from one another, and public transportation between these cities is far from convenient. Moreover, it is confusing even for Turkish speakers, let alone tourists from abroad. Therefore, to fully experience these three provinces in all of the majesty and beauty they offer, travelers are best off taking a rental car so that they do not find themselves confined to just
one city.

İzmir: The pearl in western Turkey

İzmir is Turkey's third largest city, and is located on the Aegean coast to the west of the country. Izmir's city center is located in the district of Konak, where you will find a plethora of both historical landmarks as well as modern recreational centers. Konak is the home of the iconic Kadifekale castle, also known as the Pagos Hilltop Castle. This castle complex was created in the 4th century B.C. by the ancient Greeks, and was revamped and used throughout history by the Roman, Byzantium, and the Genoese empires until the Turkish conquest of Anatolia. Spanning from the shoreline to the top of the hill on which the castle lies, the complex's walls remain structurally intact. Inside, the traveler can experience a historically enriching experience while wandering the ruins of the Agora and the once great castle.

Alsancak, the city center's social hub, is a short drive from the main square, and offers its guests a long span of costal restaurants, cafes and boutiques that has underlined the city's image in recent times.

A quick drive out of the city center brings you to Balçova. This district has become renowned within the country for offering all the natural environments a tourist could ask for. Here, not only will you find large spans of sandy beaches, but a lush, green forest as well. There is also a highland where you can catch a great view of the neighboring sea and municipal regions at night, making it an ideal place for a romantic outing.
Çeşme is another of the provinces marvelous coastal areas that would be difficult to reach without a car at your disposal. Here, at Turkey's western-most point, you will find an array of marinas, hotels and restaurants, as well as one of the country's most famous beaches.

Muğla: Heaven on the Aegean coast

Muğla, like İzmir, is one of Turkey's most visited coastal regions. Home to spectacular landscapes and calm, warm beaches located at the juncture of the Aegean and Mediterranean Seas, Muğla hosts the high-end resort cities of Bodrum, Fetihiye, Datça, Ölüdeniz and Marmaris. But the distance and the hassle of transportation between these districts often prevents visitors coming to the province from being able to explore all five of these wonderful coastal cities. In Bodrum visitors can see the ruins of the once great Greek city at the Theater of Halicarnassus and the Mausoleum of Mausolus, which is listed as one of the Seven Ancient Wonders of the World. Bodrum also houses the Castle of St. Peter, a large Crusader castle that still remains intact.

Ölüdeniz offers guests a rare experience of paragliding over its surrounding beaches and forested hills. The town also has an iconic blue lagoon where scuba divers can explore vast underwater caves and coral reefs. Marmaris is a small town that played a large role in Ottoman naval history; thus, you can find a massive naval castle that the Turkish Ministry of Culture continues to renovate. Repurposed as a museum, the castle hosts a large art gallery and a tropical relaxation garden.

Off the coast of Marmaris lies Heaven Island, home of the Nimara Cave. This cave was regarded as one of Ancient Greece's most holy sites as it was believed that the mother of Apollo and Artemis used to reside within it. Fetihiye lies on the ruins of the ancient city of Telmessos, and includes many historical sites such as the Tomb of Amyntas and the Telmessos Theater from which many important Greek plays originated.

Antalya: The Turkish Riviera in the South

Antalya is one of the few cities in Turkey that has an international airport. Many thousands of tourists from Turkey, the Netherlands, Russia, Germany and the rest of the world fly to the Mediterranean city every year to experience its marvelous beaches and year-round warm climate.
However, the province of Antalya is quite large, and the airport only services the city center. The new nature of its viral popularity has left its public transportation inadequate as the large bay hosts many top-notch resort villages. Alanya, one of the most popular tourist attractions of the entire province, lies 138 kilometers from the municipality of Antalya, and is one of the most iconic ports in Turkey.

Known for its beautiful beaches and naval structures left over from Seljuk and Ottoman times, Alanya also houses many historic sites including the Church of Saint George, the Red Tower and the Castel of Alanya. Alanya also offers guests top-tier recreational activities including parasailing, windsurfing and boating.

Kaş is another of Antalya's cities located far from the city center. But here, tourists can enjoy walks through the restored historic town that perfectly depicts Mediterranean Turkish architecture, while also taking part in unique activities. Kaş is one of Turkey's best locations to go scuba diving, as it has 50 sites, including submerged aircraft and vessels. Tourists can also watch classic Hellenistic theatrical shows and jazz concerts as well as once-in-a-lifetime under water ceramics exhibitions. İzmir, Muğla and Antalya are among some of Turkey's best summer vacation retreats, however limitations to public transportation restrict visitors' movement, and more often than not keep them from obtaining the best experience they can from their trips. Therefore, renting a vehicle and exploring these provinces without travel restrictions could make for the trip of a lifetime.
Last Update: Aug 08, 2014 1:05 am
RELATED TOPICS