Turkey ready to mesmerize you with its unusual destinations 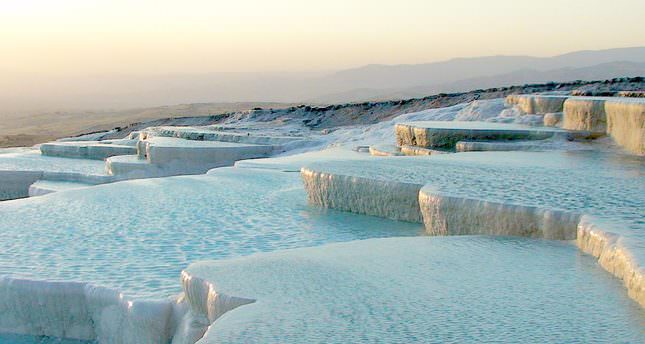 If you like to mark your vacations with strange destinations, Turkey awaits you with its ancient cities and natural wonders, which will turn your vacation into an adventure

Located between Europe and Asia, Turkey, a uniquely beautiful country, hides the most colorful places waiting to be discovered. Turkey's lands stand as a cultivating culture and mesmerizing history for its visitors. From the westernmost cities to easternmost cities, you will always be astonished, while visiting the beauties that have been hiding in these lands for years. It is known that civilization existed on Turkish lands for thousands of years; that is why, each excavation reveals another secret beauty that is unique to those lands.

From ancient cities to natural springs and mud baths that have been formed due to geological movements, you will definitely be amazed during your vacation. To witness history, to discover how modern and ancient can melt in the same pot and to understand the kinds of beauty Turkey hides in its rich, fertile lands, Turkey awaits you! Be reassured that that the country has more unusual and unique destinations waiting to be discovered than you could imagine. We've listed and reviewed some of these unusual places across the country, and if you want to experience different alternatives to Turkey's heavenly Riviera, keep reading because you will experience history in all the places mentioned below.

Located in the western city of Çanakkale, the historic city of Troy is a destination that has existed for over 4,000 years and is known as the core of ancient civilizations. Even though it has been a legend for years, the city of Troy, as we know it today, was found in Turkey in the 19th century. The famous archaeologist Heinrich Schliemann undertook the first excavations at the site in 1870. Considering its story, it can be said that those remains are the most significant indicator of first contact between Anatolian and Mediterranean civilizations. Troy is one of the most famous cities in history, remembered for giving us Hector, Achilles and the Achaean Greeks, the saga of Helen, Paris, Agamemnon and Priam. Its story is written in every language, Trojan heroes, Achilles' heel and "The Odyssey," written by Homer became cornerstones in poems and Western mythos. If you want to witness history and how it combines today with ancient times, Troy should be among the top 10 on your "must see" places list for Turkey.

Nested between the well-known tourist destinations of Marmaris and Fethiye, Dalyan is renowned for its mud baths, which hosted Cleopatra on her legendary beauty trips. With its hot sulfur springs and famous mud baths, Dalyan is marked as a unique spot that attracts many tourists' attention. Because it is located on the far side of Lake Köyceğiz on the outskirts of Dalyan, the baths are usually reached either by a private boat (which costs around TL 150), or by a guided tour. The surrounding region includes other attractions that make the place worth spending a day in, including Ancient Lycian rock tombs, the ruins of the city of Kaunos, Lake Köyceğiz and a protected beach where the endangered loggerhead sea turtle lives. Dalyan's mud baths have been visited by celebrities such as Sting, Jack Nicholson, David Bowie, Robert Maxwell in recent times. The Köyceğiz and Dalyan area has been protected since 1988 as part of the Köyceğiz-Dalyan Special Environmental Protection Area (SPA).

Known as Hierapolis, Pamukkale ("cotton castle" in Turkish) is accepted as a gift of nature for those who visit. . Being famous for its hot springs and travertines - terraces of carbonate minerals left by flowing waters - Pamukkale is located in western Turkey and calls on those who are looking for a relaxing experience. There are dozens of remains from the ancient city of Hierapolis, including Greek monuments, around the city. With remains from different civilizations, natural wonders and pure white travertines, Pamukkale has three different thermal regions - Sarayköy, Karahayıt and Gölemezli - that are accepted as health-invigorating places with springs and mud baths. In Pamukkale, you can spend a day or just a few hours having a completely organic cure for your skin problems and then visit the amazing travertines that enable you to see the kind of beauty that nature
is able to create.

Described as an outstanding universal treasure, Mount Nemrut is a UNESCO World Heritage Site due to the statues that were erected on the mountain in ancient times. There are numerous large statues, which are assumed to be royal tombs from the first century B.C. The mountain is one of the best places to view such glorious history.

Every year, hundreds of tourists come to the mountain to witness its history in person, including the artistic achievements of the Hellenic period and the fascinating beauty of the monumental sculptures. While the statues are magnificent at any time of day, the mountain offers all of its beauty at sunset. When you see the sun setting on the mountain, you will be mesmerized by the landscape - just don't forget to take your best cameras along if you head to Mount Nemrut.

After your visit to the mountain, you can spend a night in the city of Adıyaman. The best time to visit this mountain is between April and October. From Adıyaman to the mountain, there are trips by bus and overnight tours running out of Kahta, a district of Adıyaman.
Last Update: Aug 09, 2014 1:58 am
RELATED TOPICS