Ancient city of Kastabala to be unearthed 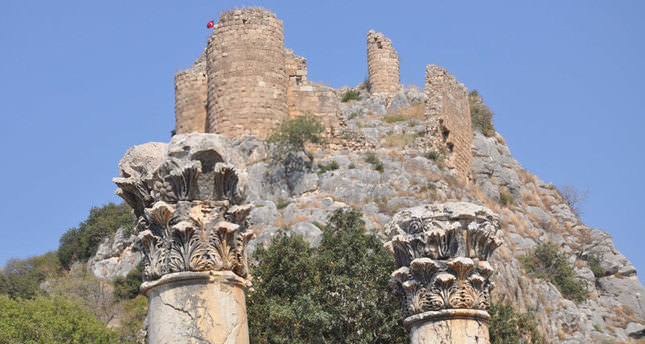 by AA Sep 03, 2014 12:00 am
Excavations continue to unearth the ancient town of Kastabala, also known as Hierapolis, which is located 20 kilometers away from the southern province of Osmaniye. Kastabala features similar characteristics to Roman-era sites such as Perga, Pergamon and Ephesus. Dating back to the seventh century B.C., Kastabala experienced its golden age in the second century B.C. Presently, the excavations are being carried out by Professor Turgut Hacı Zeyrek of Karadeniz Technical University (KTÜ) with a team of eight experts. In his statement to an Anadolu Agency (AA) reporter, Zeyrek said the excavations began in 2009 with the approval of the Cabinet of Turkey.

The ancient site's location is a key juncture between Anatolia and Mesopotamia, and it is also of strategic importance to control eastern Cilicia and Amanos. The main street of the ancient site is lined with magnificent pillars, and a castle, marketplace, bath and temple surrounded the nearby area. "Kastabala displays the region's urban identity compared to other ancient cities that are lost under modern settlements in Antakya and Tarsus. We intend to introduce tourism to the region," he continued. The archeological team is currently working on uncovering the theater and the main street. Generally, it takes at least 10 years to fully unearth an ancient region because state ministries and local authorities should offer sufficient funding and support. "We do not have any problems in creating scientific teams, but have financial problems. Local authorities do not show enough interest," he added. Zeyrek also helps his team with digging tools. "At least 30 people are necessary to properly continue excavations.

We cannot find enough workers who can work for minimum wage and insurance in the summer months since most of them work in agricultural areas," Zeyrek noted. In previous years, a local prison sent some workers to the site. "We had many students participating in the excavations [as well]. The excavation sites were used as a workshop and we instructed our students in master/apprentice relationships. Now, when we request them to attend an excavation, they ask for money," he concluded.