Goodbye to high heels: The flat shoe trend marches on 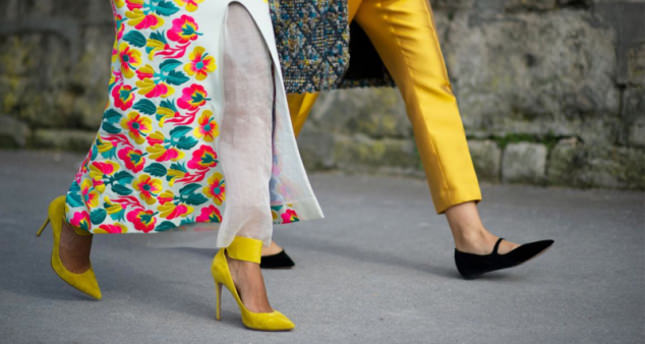 For a woman, shoes are not a desire, they are fundamental necessity. Flats are the new heels, making its mark across podiums this summer

This summer's Paris Haute Couture shows were remarkable for the high visibility of flat shoes. Many of the female guests attending the shows wore roman sandals or ballerinas, while men came in brogues. The female press officers for the talented designer Bouchra Jarrar wore very down-to-earth laced shoes. The only people in high heels were either ladies of a certain age or Hollywood celebrities who can't wear anything else.

It appears that there is more to the flat shoe trend than a mere flash in the pan. Last January Karl Lagerfeld sent his models down the runway in flat sneakers. Designer Raf Simons integrated sport shoes into his Dior collection. That was regarded as a sensation at the time. Now, Lagerfeld has paired flip-flops with Chanel, indicating flat sandals may become a cult couture item.

Several of the online designer fashion platforms such as Net-A-Porter and Mytheresa have increased their ranges of flat shoes. "Just a couple of years ago there was not such a big variety," says Sasha Sarokin, senior buyer in London for Net-A-Porter. "It was mainly ballerinas and training shoes, which people were wearing in their free time or at the weekend."

Today it's much easier to play around and find a pair of flat shoes for the look you're trying to create. It's not just in the shoe category that a change in established thinking is happening. There are signs that a completely new female image has slowly developed and will make its full appearance this season.

The new look consists of a soft oversize coat, A-shaped calf-length pants with a matching tunic top or a well-made blouse. Swedish label Acne or The Row from the US have embraced this style. But the look can be said to have originated with one woman: Phoebe Philo, designer at Celine.

"The woman who knows what women want," is how the New York Times described Philo earlier this year. Journalist Whitney Vargas wrote that Philo had changed the course of fashion in each of the six years she has been designing for Celine. According to Vargas, Philo has made comfort the ultimate fashion luxury.

In contrast to the 1980s and 1990s when Jil Sander and Giorgio Armani created clothes for women borrowed from men's business suits, male and female dress codes no longer play a role in fashion. The crossovers have disappeared. "Clothes are no longer about looking chic," says Sasha Sarokin. "They are comfortable so you can wear the same outfit the entire day: from strolling in the city to dinner with friends in the evening."

The main thing is that your outfit looks cool and comfortable. Even Victoria Beckham, who made stilettos part of her look, is turning away from high heels. In an interview for Net-A-Porter's online magazine, Beckham advises readers to go beyond high heels.

"Trust yourself in flats. It would be impossible for me to run after my kids in high heels or to run around my London studio."
Last Update: Sep 04, 2014 1:05 am
RELATED TOPICS