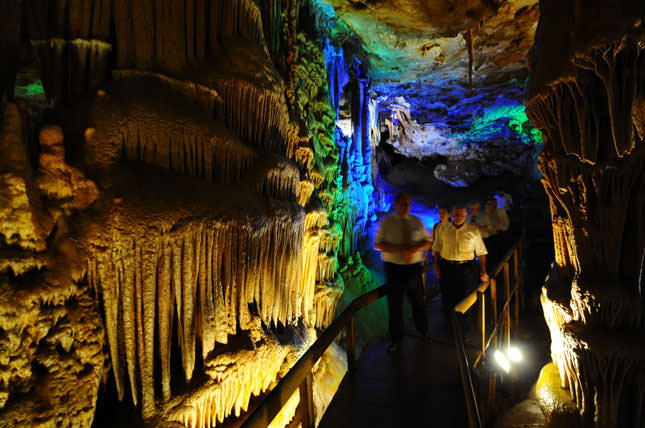 With its suitable geological conditions and more than 40,000 caves and caverns, Turkey calls out those who want to discover the underground lakes, cisterns, stalactites and stalagmites of the country

With over 40,000 caves and caverns, Turkey can be described as a paradise for potholing and spelunking. This country hides churches, underground lakes, cisterns, stalactites and stalagmites for visitors who want to explore a different side of the country.

Most Turkish caves are found in northwest Anatolia, southeast Anatolia and central Anatolia. Turkey has some of the largest and most extensive caverns in the world with caves found in both low and high altitude areas. Considering the geological diversity of Turkey, some caves require specific training and equipment to discover, as they can be dangerous for inexperienced cavers. If you are an adventurer that is curious to discover underground Turkey, it is recommended to explore those caves with a tour guide.

In an effort to diversify tourism in Turkey, the Ministry of Culture and Tourism has opened 50 of the more than 20,000 of the nation's caves to visitors. The Cave Tourism Project was initiated in an effort to draw in tourism from the coast to the nation's internal regions to influence development while also promoting natural and cultural values. Of the 50 open caves, everyone is allowed to visit 31, while 12 require equipment and a guide for caving, and access to seven of these caves is only allowed for professionals.

Last year, Italian archaeologist Francesco D'Andria discovered a mythical cave that lies in the ancient Phrygian city of Hierapolis – modern-day Pamukkale – and he named the cave "The Gate to Hell" because it emits a high level of carbon fumes that can instantly kill anyone who enters the fabled and cursed land. In ancient times, priests used the area as a site for rituals and holy sacrifices. While only priests were allowed near the opening of the cave, the common man could perform the rites and rituals from a distance. While you may not enter "The Gate of Hell," you may try to find a "Gate to Heaven" naturally carved into Turkey's gorgeous landscapes. Here are beautiful and amazing caves waiting to be discovered by you.

REMEMBER: Under no circumstances should you should enter a cave alone. Caving is a team activity, not an individual sport. To do this sport, you will absolutely need a helmet, carbide lamp, an SRT kit, a set of ropes, thermal underwear, a sleeping bag and mat and a pair of rubber boots. Also, you should not forget that caving requires special strength and a minimal degree of physical conditioning.

Discovered by accident in 1948 while building a harbor and located in the southern city of Antalya, Damlataş Cave is one of the most touristic caves in the country with its amazing architecture of mystical structures. Here, you can discover how cool blue water combines with the natural beauty of the underground, and according to officials, stalactite and stalagmites in the cave were formed over 15,000 years ago. Moreover, legend says that the air within the cave is beneficial to asthmatic patients, which caused scientists to analyze a sample of the air to verify whether it is beneficial. It has been found that the air is beneficial to patients suffering from non-allergy asthma.

İnsuyu Cave, in the southern city of Burdur, hosts millions of stalactites and stalagmites as well as nine pools where you can wander in little boats. In these nine lakes water flows in small streams to other regions of the cave, and cool and clean air constantly circulate through the caves. It is believed that the cave has curing features for diabetes, and diabetics often visit the cave to drink the water. Burdur is not usually considered as a touristic spot in Turkey, but you should never miss this cave if it is on your route.

This fossilized Gilindire Cave, whose entrance is situated on a slope 45 meters above the shore, has stalactites, stalagmites and column formations as well as rare features such as cave pearls, a travertine and showerhead stalactites. A shepherd accidentally found Gilindire cave in 1999, and scientists now regard it as unique. Gilindire Cave is situated over 265 acres and is 555 meters wide and 46 meters deep. The main gallery, which extends 450 meters horizontally, leads to a lake at the bottom of the cave. Due to hydrological changes, the stalactites and stalagmites in the cave were submerged under water and have survived without being affected by atmospheric changes. It was determined that the underwater geological formations were formed before a global climate change event; hence, they contain geological and atmospheric data from the previous ice age. The cave is the only ice age data source in Eastern Europe, the Middle East, the Balkans and eastern Mediterranean.

The Altınbeşik Cave in Antalya has the world's third and Turkey's largest underwater lake. The length of the cave spans more than 2,200 meters, while its lake is 125 meters long with a depth of over 15 meters in some places. There is a natural bridge formation of rocks in the center of the lake, and at the end of the lake, there is a 44-meter-high travertine. Due to the heavy inflow of water in winter and spring, this cave is best visited in summer and autumn.

Gürlevik Cave in Karaman contains a large stream that flows within, and according to research conducted on the 2,500-meter cave, there are areas that consist of two levels connected to one another by geologic formations.

Susuz Güvercinlik Cave in Konya is a horizontal cave containing large amounts of water. With a height of 1,160 meters and a total length of 1,351 meters, the deepest portion is 33 meters. The large-scale cave contains a number of interesting travertines, including stalactites, stalagmites and columns as well as water and lakes, making it an extremely appealing and beautiful site. With further efforts, this cave may eventually be opened up to tourists.

Pınarbaşı Cave in Konya is a horizontal cave that developed on a fault line of cretaceous limestone. There is a large caustic source in the cave as well as very difficult culverts and lakes. It also is very rich in dripstone. Undoubtedly, it is a very difficult cave to access.

Kızılelma Cave in Zonguldak is 6,630 meters long and 114 meters deep. This cave has side entries and a main gallery that consists of a wide variety of stalactites and stalagmites. There are also bats located in the fossil section near the entrance of the cave.