Gökçeada: An Aegean escape to island life in Turkey 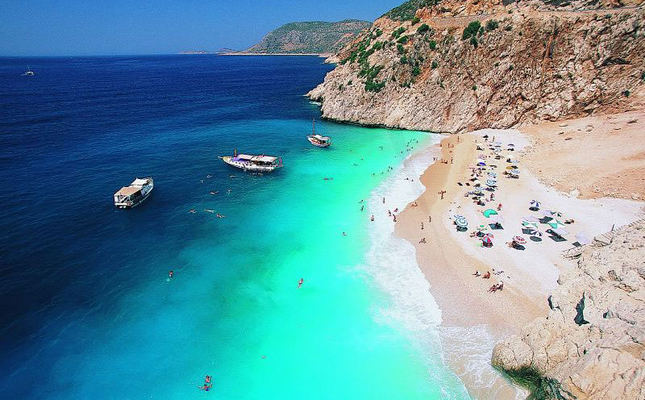 Turkey’s largest island, Gökçeada, has retained a piece of history, culture, nature and a traditional way of life. Formerly known as Imbros, Gökçeada, which is a member of Cittaslow, has beautiful villages, untouched greenery, tranquil bays and sandy beaches all with stunning views of an endless horizon

Gökçeada is Turkey's largest island. Located in the Aegean Sea where the Gulf of Saros and the Dardanelles Strait meet in Çanakkale province, it is also the westernmost point of Turkey. Sprawled across 279 square kilometers, what stands out about this island is how untouched it still is in both its architecture as well as its vast greenery. A slice of true island life can be seen in Turkey as Gökçeada, which translates as "heavenly island," offers a genuine experience of Turkish-style island life laden with history, culture and tradition in a stunning landscape of sea and cliffs.

Gökçeada has been inhabited as far back as history goes. Originally colonized by the Pelagians, Persians, Athenians, Spartans, Romans, Byzantines, Genoese, Venetians, Ottomans and finally the Turkish Republic. The population remained predominantly Greek until the 1960s when many emigrated due to the population exchanges and Turks began settling in. The population now is predominantly Turkish, however there is still a thriving Greek population on the island that is being supported with new government initiatives such as the private Gökçeada Greek Elementary School formerly called the Aya Todori Primary School, which reopened its doors last year for the first time in 49 years since its closure.

Gökçeada is also the first Cittaslow island in the world. As part of the Slow Movement, Cittaslow's goals include improving the quality of life in towns by slowing down its overall pace through protecting their own characteristics and local culture including architecture, nature, arts and products. As a result, the architecture has remained mainly intact, most of the island is untouched and the foodstuffs prepared on the island are all organic.

Running 30 km across, Gökçeada is a lush windswept island with a valley running through it and an endless coastal horizon. Pınarbaşı is the longest sandy beach on the island while Aydıncık is the best location for windsurfing, Kefalos Burnu for kite surfing and Marmaros Beach has a waterfall. Salt Lake, which is on the flamingo migration path, also has special healing black sulfur clay that you can bathe in.

Kaleköy, named after the Byzantine Castle that once towered over the island, is the ideal accommodation location if you want to stay at a seaside guesthouse or enjoy drinks or dinner in a quaint tavern as the sun sets. It also hosts the country's first protected sea zone, the Gökçeada Underwater Park and the Gökçeada Diving Center, which make it an ideal scuba diving location.

There are a number of historical villages, namely Zeytinli, Bademli, Tepeköy and Dereköy, that are well worth visiting, but make sure you enjoy a dibek kahvesi, a special historical hand-ground variation of Turkish coffee. There are also two prominent dairy farms, Elta-Ada and Mutlu Keçiler Çiftliği that you can visit and purchase wonderful cheeses, butter and yogurt as well as organic produce. Elta-Ada also has a kiosk in town where you can buy their delicious organic cheeses. There is also a weekly farmers market on Sundays.

There is a wide variation of accommodation on the island, spanning from camping and basic bed and breakfasts to more upscale hotels and resorts. The most characteristic high end hotel in Kaleköy is Anemos Hotel, a stylish stone building with a swimming pool and stunning views. Otel Gokceada Surf is a spacious, somewhat classy and grassy windsurfing resort situated on the beach in Aydıncık and Çelik Pansiyon offers a more laidback vibe as well as windsurfing options.

Yakamoz at the tip of Kaleköy is the ultimate location for dining with stunning views and Alomiya in the town center is the island's ultimate "find" for its scrumptious ice cream made from goat's milk.

Gökçeada is the perfect getaway from Istanbul as it is just a four to five hour drive south to Kabatepe where a ferry takes off for the island. Let the island take you away into a wonderland of history, characteristic white houses, cobbled streets, peaks jetting into the sea along the horizon, in what was a recurring spot in Homer's "Illiad."