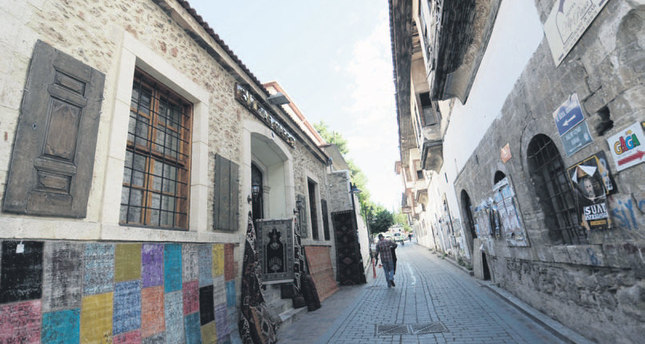 by AA
Nov 09, 2014 12:00 am
The old town in Antalya, between the city walls, is a hotbed for domestic and foreign tourists thanks to its dungeons, Hadrian's Gate, Clock Tower, Yivli Minare (Fluted Minaret) Mosque and some city wall remnants.

The old houses of the old town not only give information about the architectural structure, but also reflect the traditions, lifestyle and social aspects of that time. Located within the Muratpaşa district, the old town brings traces of the history of Antalya, which is surrounded by the sea and city walls.

Even though Kaleiçi is largely losing its appearance and spirit and leaving its antique structures, lifestyle and culture to today's world, it still attracts the attention of photographers and tourists in spite of new construction.

Kaleiçi, which surrounds the bay with its horseshoe shape, takes visitors back into the past with its masonry houses that embellish the narrow streets. Visitors can also take the opportunity to examine objects that are hand-crafted by locals.

Touring the streets, which are full of Yörük hand-knotted carpets and rugs, a tourist can get information on and take photos of Hadrianis Gate, the Yivli Minare Mosque and İskele Mosque that were restored during the Kaleiçi restoration work.

Known as one of the first examples of Islamic architecture in Antalya, the Yivli Minare, a Seljuk artifact from the 13th century, has fascinated tourists with its face stone base and turquoise blue and brick-colored tiles on the body. Being the symbol of Antalya today, the minaret, which can be reached after ascending a 90-step ladder, provides insight into the area's history. The minaret has eight grooves and is 38-meters-high.

Known as Üçkapılar, Hadrian's Gate is among the places where tourists visit in droves to take photos.

Built to address Hadrian, a Roman emperor, during a visit to Antalya – then called Attaleia – and being a monumental gate in the city wall surrounding the old town, Hadrian's Gate sparkles at night when lit up.