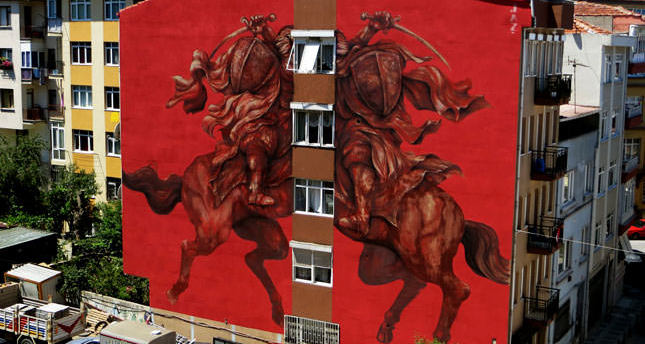 Discover Yeldeğirmeni, one of Kadıkoy's oldest yet most up and coming neighborhoods, that perfectly blends the contrast of a traditional Turkish neighborhood with the bohemianism of dozens of art studios and cafes with streets lined with impressive colorful and artistic murals.

Yeldeğirmeni is a hidden gem in Kadıköy. Imagine a traditional and typical Ottoman neighborhood, with churches, synagogues and mosques and century-old apartments, set against the juxtaposition of impressive street art, with building facades transformed into art murals of color and meaning. This is Kadıköy's Yeldeğirmeni neighborhood, one of the oldest neighborhoods situated in the heart of urban Asia that is home to nearly 70 art studios spread out amongst a dozen or so streets, that is now becoming one of the most popular hotspots for expats in Kadıköy.

Yeldeğirmeni, which translates as "windmill," gets its name from the flour mills in the neighborhood which would supply the flour for the palace in the Ottoman era. Although the windmills are no longer there, the frequency of bakeries in the neighborhood is testament to its legacy. There is a synagogue, a church and a mosque, representing the cultural mosaic that is inherent in Istanbul's history. It is also one of the rare remaining neighborhoods where the first apartments ever built in Istanbul remain, with bay windows on the front façade and the interiors opening up onto a central courtyard of greenery and trees.

The streets are still lined with local vendors and specialty shops, however interspersed between traditional kahves and kıraathanes are dozens of art galleries, cafes and social centers infusing the neighborhood with a lively, friendly and bohemian vibe. Meanwhile, Yeldeğirmeni also boasts not only one, but two libraries as well as numerous student dorms and is also home to the majority of Erasmus students that study in Istanbul. While, in a sense, time seems to have stood still as the neighborhood's architecture remains mainly untouched, the shops are all small local vendors and there are people of all creeds, nationalities and socio-economic classes; at the same time the impressive and massive murals that decorate the streets and the dozens of art galleries and cafes in the neighborhood transport you into a world where tradition and bohemia meet in the most creative of ways, which Turks definitely have a knack for.

As part of the ongoing Windmill Neighborhood Revitalization Project the Kadıköy Municipality and The Foundation for the Protection and Promotion of the Environment and Cultural Heritage (ÇEKÜL), organized Turkey's first-ever Street Art Festival in 2012 and the following year, in which street artists from around the world spent a week decorating the entire façade of blank walls of building with beautiful works of color, meaning and art.

The Yeldeğirmeni neighborhood, which has a population of 16,000, underwent a decline in the 1980's and was one of the lower real estate regions in the Kadıköy district. Since then, it has become an artist and expat hub and is now a prime candidate for rapid gentrification, which can lead to the displacement of the neighborhood's original residents. The Windmill Neighborhood Revitalization Project is an effort to facilitate urban renewal from within with local residents becoming the key players as a catalyst for change. The project focuses on creating public spaces that enable social interaction, by reclaiming streets through taming traffic, enlarging pavements and transforming residual spaces into public areas, such as community centers, parks, greenery and even a sculpture garden. Socially, the project connects the community through a local network, public participation and solidarity in protecting local values and the neighborhood's strong sense of belonging. All of the projects undertaken have been done so by the community, in a sort of grassroots movement, which makes it revolutionary in the sense that it attempts to make physical changes through locals' initiatives and social interactions.

There is the Mahalle Evi, where locals meet to discuss and plan revitalizing projects in the neighborhood. One such project was the reopening of the Notre Dame du Rosaire Church as Yeldeğirmeni Sanat, an exhibition and conference hall. The Design Atelier Kadıköy (TAK), housed in a former cinema, is an organization formed in collaboration with the municipality devoted to creating strategic solutions to spatial issues in Kadıköy. It has become a meeting place where workshops, film showings and even concerts are held.

The streets of Yeldeğirmeni are lined with art studios of all mediums, albeit too many to mention. However, just wandering the colorful streets of this very special neighborhood, will give a glimpse into the exciting new contemporary art scene developing in Turkey. The Don Quixote Social Center, Istanbul's first squat, has become a cool collective space, which offers a variety of art, hobby and horticulture workshops.

More and more cafes are popping up each day and there are even two vegan joints, Mahatma Café and Komşu Kafe Collective, the latter of which is especially popular with expats and has an open kitchen and no set prices. Cafes selling specialty coffees also line the streets, with Café Sene 95 buzzing with artistic and literary types spilling onto the sidewalk.

Perhaps one of the most exciting venues in Yeldeğirmeni is Boulder Istanbul, a rock-climbing center that has become a meeting ground in the evenings for local and foreign residents. A daily pass costs just 15 TL to traverse the five-meter high walls, and a monthly pass is TL 100. The Kadıköy Chess Center is also housed in Yeldeğirmeni, as is a branch of the Turkish language school Tömer. Hush Hostel Lounge has both an art gallery as well as hip and comfortable accommodation if you want to discover the neighborhood overnight. Start your adventure in Yeldeğirmeni by visiting the mural on Karakolhane Street, which is actually a map of the neighborhood and a list of all of the main points of interest.