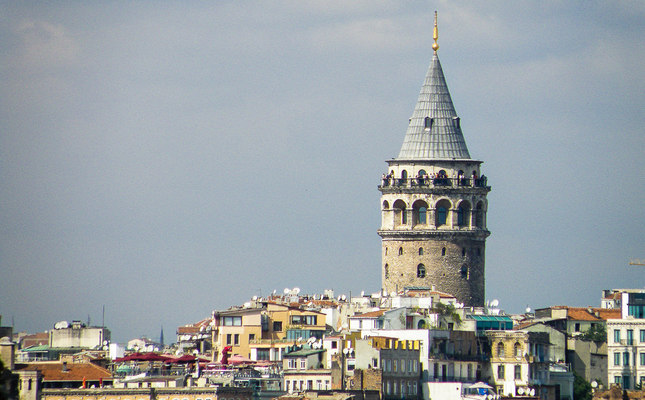 The stories from Istanbul’s rich history always surprise visitors, but of them all, the story of the towers is the most evocative. It is one that will bring to mind beauty, agony and joy all at the same time while offering a 360 degree panoramic view of Istanbul

The never-sleeping city of Istanbul casts a spell on both visitors and residents with its history, culture and beauty that lies beyond imagination. Situated as a landmark between Europe and Asia, Istanbul embraces the world. It has witnessed many civilizations, many cultures and many historical figures, like a beautiful lady whose heart every king or sultan wants to steal. Even today, when you walk down its streets, you can feel an unforgettable energy that affects you instantly. Istanbul, the seven-hill city, may sometimes suffocate you, but it will take only a moment for it to remind how much you love it. It is like a lady waiting to be discovered.
When you walk down one of its old streets or cross the Bosporus by boat, a song written about the beauty of Istanbul or about its femininity can touch you, and you will come to understand why millions of people never leave this old, beautiful city despite agonies, hard times or exhaustion.
The song I mentioned is sung by Turkish singer Levent Yüksel and it translates as:

Every city in the world has one or two distinguishing landmarks. This is not the case with Istanbul; it is not possible to list every one of this city's landmarks, since there are so many spread over its seven hills. Minarets, churches, towers, fortresses, old streets, bridges… They are all landmarks of Istanbul and all have stories to share with its visitors. Today, we will take a look at only one - the seven hill's towers. Their stories will make you want to hop on the first plane and visit the magnificent mega-city to "kiss its neck."

1) Maiden's Tower: For years, people enjoyed the mesmerizing views of Istanbul, which included the Maiden's Tower (Kız Kulesi). It is situated in the middle of the Bosporus like a beautiful girl displaying Istanbul's beauty. Standing as a landmark of Istanbul between the two sides of the Bosporus, the mysterious history of Maiden's Tower stretches back 2,500 years. The attractive structure seen in almost every Istanbul photo or picture has two legends. The first tells the story of a beautiful Byzantine princess. According to legend, this princess was once quartered in this tower since soothsayers had predicted her early death by snakebite. Her father, Emperor Constantine who loved her dearly, built an extended castle (near the spot where the present tower exists), and placed her there to avert this fatal end. Eventually, the girl could no longer avoid her fate and was bitten by a snake, which had entered the castle in a basket of grapes.

The second legend tells of the romance of two lovers, Hero and Leander. We are told that a castle was built upon the present site by a Byzantine Emperor for his daughter Hero. When the Emperor learnt that his daughter was in love with a commoner named Leander, he imprisoned Hero in the castle. This could not discourage Leander from crossing the Hellespont in order to see Hero. One stormy night, having no light to guide him, he drowned. Upon hearing of his death, Hero flung herself into the sea. Today, the tower has been transformed into a café and restaurant, and it offers a night filled with romance and exclusive Ottoman and international cuisine. More than just a romantic dinner location with nostalgic ambience, the tower is also a memorable wedding venue.

2) Galata Tower: On the northern shore of the Golden Horn, Galata Tower, known as Christea Turris in Latin, (the tower of Christ, which once supported a spire and a cross on top) was built by the Genoese in 1348. There are several theories regarding its name. According to the Italians, the name comes from "calata" which means downward slope, as the neighborhood descends from a hill to the sea. Greeks, on the other hand, believe that the name comes from either "galaktos" meaning milk, as the area was used by shepherds in the early medieval period, or from "galat," which denotes the Celtic tribe of Galatians who were believed to have lived there during the Hellenistic period before settling in Galatia in Anatolia. The legend of the Galata Tower says that whomever you climb this historic tower with, you are destined to marry. So a tradition has developed today where many people who believe that they found their one true love queue up to climb Galata Tower together. Originally built as a watchtower, the medieval structure extends 66.9 meters (nine stories) high. The city's tallest structure was a vantage point built to look out over the city of old Istanbul sprawling over the opposite side of the Golden Horn. An elevator goes only to the seventh floor and visitors must climb the two remaining stories. The restaurant at the top will satiate your appetite, while the 360 degree panoramic view of Istanbul's beauty will captivate you with a view of the Bosporus, the Golden Horn, the Blue Mosque and many other monumental landmarks. If you come in the evening, you may dance the night away to Turkish music.

3) Beyazıt Tower: Beyazıt Tower, which is an 85-meter-tall fire-watchtower, is located in the courtyard of Istanbul University's main campus on Beyazıt Square. It is one of the most striking landmarks of the city that allows you to see a truly panoramic view of this magnificent city. It is on top of one of the seven hills, so when you climb to the top, you will see all the hills on which Constantine the Great built the city. Today, it is only open to Istanbul University students, but there are plans to turn it into a museum and open it to the public. If you are lucky, it may be open during your Istanbul visit, and apart from the other landmark towers, you will also view the 360 degree panorama of the city. In contrast to its original function of detecting fires in the city, more recently until 1995, the tower was equipped with a lighting system to indicate weather conditions in different colors. Red color meant snow, blue meant pleasant and clear weather and while green signaled rain, yellow indicated fog. In past times, the watchtower was called the "fire-mansion," and there was always a fireman called "mansion resident" watching for fires. According to the traditions of the tower, when there was a fire, the mansion resident yelled: "Agha! You have a baby!" meaning there was a fire somewhere in Istanbul, and the Agha would ask: "Is it a girl or a boy?" If the fire was on the Anatolian side, in Beyoğlu or on the Rumeli side of Bosporus, the answer would be a girl. However, it was a boy if the fire was in the center of Istanbul, and the Agha would announce the fire to the public.