A weekend getaway in the fertile lands of Sakarya 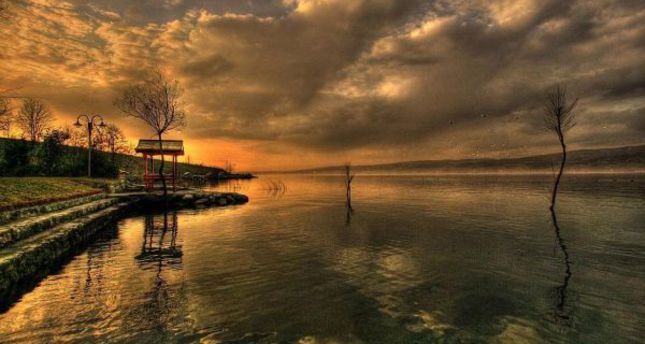 With every tone of green in sight and only a two-hour drive east of Istanbul, Sakarya’s fertile land in northwest Turkey lies waiting to be explored

Named after a river passing through the middle of the city, Sakarya is a fertile land that is the hometown of many people, which invites visitors seeking to feast their eyes on all of nature's colors. The locals never refer to the city by its proper name, but instead call it Adapazarı (Island Bazaar in Turkish) – which is the name of the city center – and call themselves "Adapazarlı" – meaning a resident of Adapazarı.

What makes this city eccentric is not only its fertile lands, but also the feeling of belonging that it instills. Even though all of its residents define themselves as "Adapazarlı," nearly all of their ancestors came from different cities or even different countries. This is so prevalent that it is one of the only places in Turkey where the questions "what is your nationality?" or "where are you from?" is not taken in an offensively. From the Balkans to eastern countries, the city is home to diverse nationalities, but they all understand that belonging to the city means transcending nationality. And although some of the residents' ancestors do not live in the city, they are still Adapazarlı – something you should not challenge.

In an interesting and amusing way, most Adapazarlıs obsess over underlining their Adapazarı identity on their license plate numbers. Even though they are beginning to migrate to other cities for various reasons, they still insist on using Sakarya's license plate number code, 54, on their cars and they love to show where they come from. For them, anything that includes the number 54 is an indicator of home and enough to make them happy. Here is an interesting story: This little town ranked 65th for the amount of selfies taken according to a survey conducted in 459 cities by Time magazine. Only two Turkish cities managed to make this list and Adapazarı was one of them. Bearing its size, it definitely marked a big success. When residents were asked to comment about the ranking, they simply said they are disappointed they were not ranked 54th on the list.

The main district of this tiny city, Adapazarı, has a very interesting story to how it got its name. As the tale goes, the town was once a little island that featured a bazaar, which was set up every day, and many people sailed to the island to buy fresh fruits and vegetables. In the 20th century, however, the water around the island was filled with earth and the area became the city of Sakarya. You may also agree that the island should have been left as is; if it had been, I am sure that it would have attracted greater interest and even prevented some of the heart wrenching stories that the city has experienced. All Turks remember the earthquake that claimed thousands of lives on Aug. 17, 1999. The quake devastated this city, which was built over water in order to accommodate more settlers, and as a person who experienced that devastation, I can easily say that those pains go beyond all imagination. However, almost none of its residents left the city and instead stayed hopeful that they would see it experience better days. Fortunately, it was reborn from its ashes like a phoenix and now calls on anyone looking for a lovely weekend getaway.

Residents living in Adapazarı are mostly conservative, but not in the same sense as how the term conservative is used in Turkey. There are many cafes and restaurants in the city center, which has only one main street called Çark Street, and the fancy districts of Serdivan and Erenler, where young residents of the city spend their evenings. This green city has only two small shopping malls and lets you discover the real beauty of nature with its parks and walking trails.

Adapazarı is renowned for its pumpkins and you can even see a giant organic pumpkin that is in the city center when you visit. You must taste the city's pumpkin desserts and pumpkin ice cream; legend has it that the taste of these desserts comes from the residents' love of their city and the pumpkins' organic nature. A special meatball dish called "ıslama köfte" is also among the most delicious dishes you can try in the city. The meatballs are steam-cooked and served with sauce and slices of bread and unfermented grape juice on the side. The best place you can eat ıslama köfte and pumpkin deserts is "Köfteci Ismail," a restaurant in the city center next to Sakarya River.

There are also many nature-centric districts in the city that can relieve you of the hustle and bustle of your daily routine. These districts include Sapanca, Maşukiye and Karasu and are among the most-preferred destinations in the city.

This district features a lake that shares the same name with many fish restaurants and hotels that you can spend a night. The hills surrounding the lake are filled with villas – mostly purchased by tourists coming from Arab countries. Sapanca is one of the most suitable places for a nice weekend getaway and is surrounded by nature and greenery. There are many luxurious hotels surrounding the lake as well, such as the Güral Sapanca and Rixos Sapanca where you can enjoy a relaxing spa experience as well.

Located on the outskirts of Sapanca, Maşukiye is one of Sapanca's hidden beauties. If you do not want to stay in a hotel overlooking the lake in the center of Sapanca but want to be in the surrounded by nature on the outskirts of the city, Maşukiye is the best place for you. With its salmon restaurants and natural beauty, it is a place you can visit throughout the year to spend a day immersed in nature. The best thing to do there is trek through Alabalık Valley (Salmon Valley). The road at the end of the restaurants takes you to wherever you want to hike, and there you can see huge chestnut and oak trees. There is also a nice surprise waiting for you at the beginning of the road: A waterfall! If you visit restaurants in Maşukiye, there are three dishes cooked on tile that you must try: Cheese, fish and mushrooms. You can also spend time in country-style hotels around the district.

This little village in Sakarya offers its visitors serenity and relaxation. During the summer season, many local tourists from small cities in Turkey's Black Sea and Marmara regions prefer to take their holidays in Karasu because of its perfect weather that is neither too hot nor too cold and its proximity to their cities. When autumn arrives, though, those tourists return to their own cities and leave the beauty of Karasu to those coming from Istanbul for the weekend. You can spend a night in hotels around the town, but I should say that they are not as fancy as those in Sapanca. Considering how small it is, Karasu does not have much to offer its visitors, except the combination of nature and the sea. However, you should be careful if you are planning to swim in Karasu since there is a strong undertow.