Ankara: The heart of Anatolia 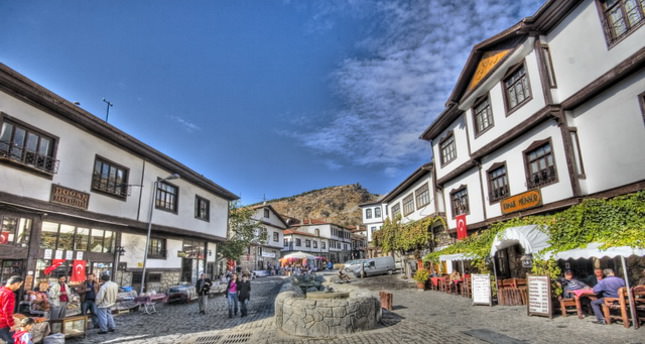 Besides being a city of bureaucracy and politics, the Turkish capital Ankara also has sites you can enjoy during your stay, from Ottoman-style houses to parks

Ankara, the capital city of Turkey, is one of the cities that has been somewhat cast aside by tourists due to the many charms of Istanbul. Most often, Ankara is not on any must-see list of Turkey, and when you do visit it, it is mostly because it is the capital city or is the location of the mausoleum of the founder of the modern Turkish Republic, Mustafa Kemal Atatürk.

A city of bureaucracy, politics and officials, first impressions of Ankara make you think "what a grey and cold city!" Only later do you realize how beautiful the matching grey and cold are. For Turkish citizens, Ankara is generally the city of prejudices – when you ask them in which city they would like to live, Ankara is rarely among their responses, as if they have no memory of the city.

I lived in Ankara for five years while I was studying at university. Since I had lived my entire life in Western cities before my journey to Ankara, I must admit that initially I did not think the city a nice or warm place to live, unaware that the city would soon capture my heart.

Behind its grey buildings and harsh weather, Ankara has many places where you can find tranquility, joy and entertainment. While you may want to run away from the city at first, after a while, you come to realize that you actually love it there with all those memories of walking the streets in the snow in harsh weather to the little cafes where you sip your coffee while reading a book. All those little moment you lived in Ankara tug at your heart when you leave the city for another – which is how it is for all the expats currently living in Ankara. But for those who want to experience Ankara in these harsh days when the city is under a blanket of pure white snow, Ankara has four top places that you must not skip during your travel to the capital. Remember, unlike other cities, Ankara is not a place that will touch your heart, rather the opposite – you should find a moment in Ankara to touch its heart, only then will Ankara become a place you think completely deserved the visit.

Here are four Ankara locations where you can touch the city's heart:

1 Beypazarı: Known as the hidden secret to getting away from gloomy days in the capital, Beypazarı is a little historic town only two hours away. Beypazarı (meaning "Mister's Market" in English), is divided into two sides: one offers a quiet place to stay with its peaceful, touristic, historic surroundings; the other, known as new "Beypazarı," unfortunately doesn't have much to offer in comparison. So you should walk through the touristic side of the town when you arrive. A huge "carrot" sculpture in the middle of the town will probably peak your interest at first. Nearly 70 percent of Turkey's carrots are grown in Beypazarı, which is why the town is called the town of carrots, and it nurtures a deep respect for the orange vegetable. Beypazarı has an old-style bazaar located in the middle of the town. Both sides of the bazaar are covered with little markets selling souvenirs and restaurants offering delicious traditional dishes. A home-made sausage mumbar, a stew cooked in a stone oven (güveç), a dried molasses-like grape syrup stuffed with walnut sucuk, an 80-layer special baklava, carrot jam and carrot delights are among the mouth-watering traditional dishes that you can try while you are in Beypazarı. With its small streets, old-style houses and boutique hotels, friendly locals and smiling faces, Beypazarı is Ankara's little hidden gem, and you must visit in order to understand how the little town can capture you.

How to get there: To reach Beypazarı, take a minibus from in front of the Ankamall, which is a big mall in Ankara around Gazi Street. There are two metro lines in Ankara, and the one that takes you to Ankamall is Ankaray. You need to get off when the Ankaray comes to the "Akköprü" stop, and then take minibuses going to Beypazarı. It takes nearly 1.5 to two hours.

Where to stay: Beykonak is the best accommodation for a night in Beypazarı. Located at the end of the city bazaar, Beykonak is an old-style mansion with huge rooms decorated in the Ottoman style. From the window of the mansion, you can see the beauty of Beypazarı. One night costs around TL 50.

2 Ankara Castle: Ankara Castle is a fortification dating back to the medieval era situated between two important places in Ankara - Atatürk's mausoleum and the museum of Anatolian Civilizations. It is one of the symbols of the town that rises on a hill 978 meters high. The castle has two sections - one an inner castle, and the other, an outer castle. There are seven entrances to the outer castle: Çankırı, Istanbul, Erzurum, İzmir, Kayseri, Namazgah and Aynalı. In the inner castle, called "Old Ankara," there are houses decorated in traditional style. Awaiting renovation, the castle is one of the most significant tourist destinations in the capital. Even though its charm and glory can be seen from nearly every high building in the city center, the castle badly needs to be renovated for tourism. If you visit the castle, you will see that there are still locals in residence as well as little souvenir shops in the castle, which can make both living in and visiting the castle difficult. Surrounding the castle walls, there are typical old Turkish houses and numerous art galleries and restaurants, and as it is close to the city center, you can visit after strolling around the most well-known streets of Ankara such as Kızılay or Tunalı. Although the exact date of its establishment is unknown, the castle was under the control of the Romans and Byzantines and then was captured by the Selçuk Turks in 1073, by Crusaders in 1101 and then again by the Selçuks in 1227. The castle saw extensive repairs by order of İbrahim Pasha in 1832 during the Ottoman era.

How to get there: Ankara Castle is near the city center, and you can either take a cab or walk when you pass Kızılay Square and arrive at Ulus Square, which is only 10 minutes away from Kızılay. On foot, it takes nearly 30 minutes to reach Ankara Castle, and it takes around five to 10 minutes by car or cab.

Where to stay: if you want to stay in a hotel near Ankara Castle, you can choose any hotel in the city center. There is also the Divan Çukurhan Hotel situated at the entrance of the castle. It is a lavish hotel designed in a traditional style, which is why it makes you feel as if you are travelling back in time.

3 Hamamönü: Located in Ankara's Altındağ municipality, Hamamönü is where you can find the old Ottoman lifestyle in the middle of modern Turkey's capital city. Having history in every wall, "Hamamönü" means "around the hamam," and the name is given to the town due to its historic Karacabey Hamamı. Mostly renowned for its breakfast facilities, Hamamönü looks like Beypazarı with the styles of houses and its friendly locals, but with a slight difference. While Beypazarı is a completely different place that makes you feel as if you have traveled back in time, Hamamönü is where you can escape from the hustle of the city center for a nice quiet lunch.

There are many historic mansions in Hamamönü, and although most of them are renovated, there are still several of them waiting to be restored. In this little old-style tourist destination, there is one of the campuses of Hacettepe University, which is one of the best universities in the city. Despite the fact that there is a campus in the small town, it is not the place for youth entertainment or nightlife. If you are in the city center and looking for a little place to see a different side of Ankara, Hamamönü should be on your list.

How to get there: Hamamönü is easy to reach within Ankara. You can take a cab in Kızılay Square, and it takes around five to 10 minutes. If you want, you can walk through Hacettepe University Hospital and pass through Hamamönü on foot since they are close to each other.

Where to stay: Since it is in the city center, you can choose a nice hotel around Kızılay or Sıhhiye. There are also some boutique hotels in Hamamönü where you can stay.

4 Kuğulu Park: Kuğulu Park (Swan Park) is situated on one of the most popular streets in Ankara, Tunalı Street. Loved by both Ankara residents and tourists visiting the capital, the street is full of people both when the sun shows itself at the weekend and when the snow starts to fall over Ankara. Tunalı is mostly known for the most romantic atmosphere in Ankara. There is a little park at the end of the street, and you can feed the swans while strolling around the artificial lake. Many nice cafes, restaurants and shops are located along your route on Tunalı Street. Also, it is a place where young people go for nightlife. Although most places in Ankara are closed around six or seven o'clock in the evening, Tunalı is always a lively place to enjoy.

How to get there: Tunali is located in the city center, and it takes only 15 minutes to walk from Kızılay. You can also take a cab costing for about TL 5.