Fly over Cappadocia all year round 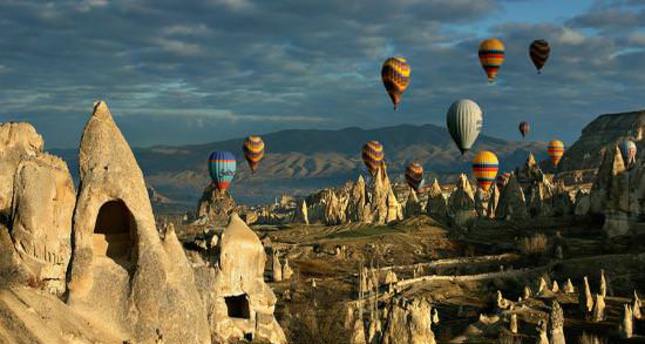 Hot air balloon tours in Turkey's Cappadocia region, best known for its unusual rock formations called fairy chimneys, continue even in winter months due to high interest. Attracting almost two-and-a-half million tourists each year, Cappadocia's featured tourist venues include the Göreme Open Air Museum, the ruins of Zelve and Paşabağı and the underground cities of Kaymaklı and Derinkuyu, along with the areas of Avanos and Ürgüp.

Tourists from all around the world visit the region even during the freezing days of winter to explore its snow-covered beauty and also the valleys and fairy chimneys. The temperature in Cappadocia can sometimes reach minus 15 C, but most tourists do not end their visit without taking a balloon tour. Speaking to an Anadolu Agency reporter, Halis Aydoğan, a balloon tour operator, said tourists enjoy the spectacular view of Cappadocia in winter while they are flying over the region. Generally, the tourist season starts in April and continues until the end of October. "However, Cappadocia receives tourists in the winter as well, hosting guests especially from East Asian countries. Since they always ask for balloon tours, we decided to run them in the winter too," Aydoğan said.

Emphasizing that it is now possible to take balloon tours throughout the year, Aydoğan added, "Tourists do not feel the harsh, cold weather. We offer a warm atmosphere in the hot balloon's basket. They have a great opportunity to watch the sky and see the region's fascinating view." When the winter comes, the rainy weather turns into snow, which blankets the whole area. Fairy chimneys look like they are hidden under a white cloth and the view from the valleys is also spectacular. According to Aydoğan, the interest in hot air balloon tours has increased thanks to local and international promotions.

Bekir Uçarkuş, another balloon tour operator, said that the tours offer a better visual feast in winter months. Snow-covered fairy chimneys add beauty to the region, he continued. "As far as weather conditions allow, hot air balloon tours run early in the morning, but we offer afternoon sessions as well. Local and foreign tourists do not want to miss the chance to discover the region," Uçarkuş said, adding that when the weather is good, almost 50 balloons can take 1,500 tourists on tour.

Additionally, the tour operators are working on new projects to draw more tourists. An assessment meeting was held to investigate combining the tourism potential of Cappadocia and Mount Erciyes, an important winter tourism destination. The first assessment meeting was held in the city of Kayseri followed by a second one in Nevşehir's Ürgüp district. Speaking during the meeting, Kayseri Governor Orhan Düzgün said almost one billion people travel each year. He said that a well-designed project will allow for the two tourist attractions to support each other. Düzgün said the two regions can become an alternative for each other as well. Kayseri Metropolitan Mayor Mehmet Özhaseki added that the city should benefit from the tourism industry more, and they have been making efforts to do so for almost ten years. "The municipality has invested TL 150 million ($63.82 million) in tourism so far and has also completed most of the necessary work. We have paid particular attention to the city's historical richness, a subcomponent of the tourism industry," he said.

Kayseri has a history dating back 6,000 years. Özhaseki highlighted that the short distance between Kayseri and Cappadocia can be an important advantage. "We thought that the two regions have the potential to create an influential synergy. However, we also realized that working with different agencies is a handicap. I already discussed this issue with the relevant ministries," he said. The tourism activities of the two cities will be managed under the same agency soon.

Australia's ambassador to Turkey, James Larsen, said he was impressed by Cappadocia's beauty when he visited there last week and toured around the region's natural and historical attractions. "The local people gave us a warm welcome. Cappadocia has fascinating beauty. I hope more Australian tourists will come here in the following seasons," he said.