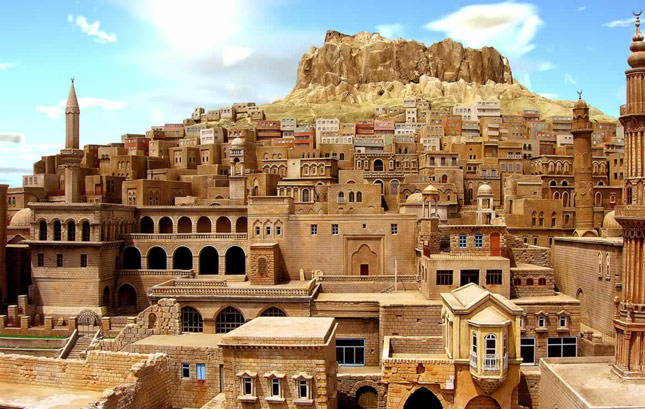 As Turkey calls for you to experience an unforgettable holiday in its historic and beautiful lands, the Daily Sabah staff picked the top five cities you should not miss during your visit in 2015

In recent years, Turkey has become one of the most popular countries to visit for millions of tourists from around the world. Its rich historical background mixed with diverse cultural heritage, not to mention to the gorgeous natural beauties on the Mediterranean and Aegean coasts, have drawn tourists interested in experiencing the flavors of both the Eastern and Western civilizations that rose and fell on Turkish soils.

Istanbul is the first place that comes to mind when one thinks of visiting Turkey. However, it would be unfair to other cities that add to Turkey's attractiveness if Turkish tourism was only limited to Istanbul. So, I asked the staff at Daily Sabah for their suggestions of the cities that both tourists and locals alike must visit.

Mardin: Mardin is located in southeastern Turkey, which is about an hour flight from Istanbul. As one of the most popular destinations for local tourists, Mardin is one of those places that must to be experienced for one to truly understand what it has to offer.

The first aspect that will strike you when you arrive, or even when you look at the photos, is Mardin's architecture. The beautiful mosaics will make you realize how a dull stone structure can be turned into art through human ability and imagination.

Furthermore, the city's art and architectural that is reflected on its religious structures speaks to how diverse ethnic groups, such as Turks, Kurds, Yazidis, Christians and Syrians, have lived together and created a harmonious environment, which is part of Mardin's fascinating charm.

Mardin's climate very hot in the summer and very cold in the winter. The city can also be divided in two sections, the old city and the new city. The old city has survived occupation by various civilizations throughout the history: From the Babylonians, Persians, Umayyads and Abbasids to the Seljuks and Ottomans. Hence, the old city, which is built on top of a mountain, offers itself as an open-air museum. When you go to Mardin, although the architecture in a simple, random street will amaze you, there are a few places you must visit. These include the Mardin Castle, Deyrulzaferan Monestry, 12th century Ulu Mosque and the Kasımpaşa Madrasah.

While in Mardin, you should also eat the city's famous badem şekeri (almond candy), leblebi (roasted chickpeas) and ceviz sucuğu, which is walnut candy wrapped in thickened grape juice that resembles a sausage link – one of my favorite childhood treats. Do not forget to check out the handcraft stores and pick up a handcrafted silver bowl from a local shop whose artisans will design it for you right in front of you.

Trabzon: Trabzon is one of the brand ambassadors of Turkey's Black Sea Region. Although it did not receive the attention it deserved from international tourists previously due to the lack of marketing and adequate transportation, Trabzon has now become popular for both local and foreign tourists in recent years due to the investments made in the province and the rise of frequent flights.

With its forests and mountains, combined with its breathtaking Black Sea beaches and views, the city has made the province feel like a laid-back seaside town or a country town dotted with cottages. However, its immemorial existence in history has blessed the city many historic sites that has elevated its sophisticated character.

While in Trabzon, there are a few places that you must visit to experience what has given the ancient city its character throughout history such as the Aya Sofya Mosque – not to be confused with the Hagia Sophia Museum in Istanbul – the Sümela Monastery and Uzungöl.

The Aya Sofya Mosque, a medieval church that was built between 1238 and 1263 and then turned into a mosque in 1461 during the Ottoman period, contains eccentric designs and interesting architecture. Sümela Monastery, another medieval church that was built in the fourth century, has become one of the most popular landmarks representing Trabzon. It is built on the rocks of a mountain cliff ledge, which gives it a dramatic look that also makes it reminiscent of a sanctuary.

Any tourist that goes to Trabzon does not leave without visiting the Monastery; so, it will be very easy to find a tour guide that could show you around. Uzungöl is another place that you must visit while in Trabzon. Uzungöl means the long lake in Turkish, "uzun" meaning long or tall and "göl" meaning lake. It is a lake in the mountains, about an hour away from Trabzon, which sits at an altitude of 1,090 meters. A small village and forest, which gives it a picturesque look, surrounds the lake, impressing the imagery of a country dotted with cozy cottages and small bungalows.

Of course, if you are in Trabzon, you have to eat the region's famous fish: Hamsi (anchovies). It is pointless to describe what dish you should try, however, because almost every dish is made with hamsi in the Black Sea Region, especially in Trabzon.

Hatay (Antakya): Hatay, also known by its ancient name of Antakya (Antiocheia ad Orontem), lies on the border between Turkey and Syria, and it is off the coast of the Mediterranean Sea. It is about an hour flight from Istanbul, but you can also take inter-city busses from the province of Adana as well. The city, built within the borders of ancient Mesopotamia, has been a home to Christians, Jews and Muslims throughout its history. This has given the city its present charisma, which has been developed through diverse faith-based architectural designs. The melting pot of these faiths has made the city famous among the locals who have branded it "Barış Şehri" (The City of Peace). Being on the Syrian border, Arab culture has influenced its cuisine, traditions and even the language. Moreover, Hatay had been a disputed area after the collapse of the Ottoman Empire until it was annexed to Turkey in 1939.

The Church of St. Peter, one of the world's earliest churches and where stories say two of Jesus' disciples, Peter and Paul, have preached, is one of the city's main attractions. It is believed that this cave church is where the Christian congregation first started growing and coming together, mostly in secret. Although the exact date is unknown, archeological studies have suggested that the church was built as early as 40 A.D. Another place you should visit is the Antakya Archaeology Museum, where you will find stunning collections of mosaics from the Roman and Byzantine periods. The museum, which displays many ancient findings from regional excavations, also displays the famous full-body mosaic of Oceanus and Thetis from the second century and the Buffet Mosaic from the third century. Walking around Hatay, especially the old part of city, you will feel like you are walking in an open-air museum where you will experience the harmony between faiths by seeing at least one mosque, such as the Hacı Neccar Mosque from the seventh century, a synagogue and a church from centuries ago.One thing you must try when you are in Hatay is künefe, a toasted dessert pastry made with cheese in the middle that is usually consumed hot.

İzmir: İzmir, also known by its ancient name of Smyrna and founded around 3,000 B.C., is a rapidly growing port city on Turkey's central Aegean cost. As a modern, developed and the third-most populated city in Turkey, İzmir will make you feel like you are truly in a European city. It is surrounded by mountains and offers beautiful beaches on the Aegean coast, right across from the Greek islands where the climate is mild in winters and hot, mostly sticky, in summers. İzmir, with its Western charm and charisma, offers itself as the "aristocrat" of Turkey more so than a traditional Anatolian city. Although the city lost many of its historical sites in 1922 because of a fire, the city still does not fall short in offering many great historical sights due to its more than 5,000 year history. While visiting İzmir, aside from its beautiful beaches in places such as Foça, Urla, Seferihisar and Çeşme, you should also visit Konak Square, famous for its clock tower built in 1901, the Konak Yalı Mosque, Kemeraltı Bazaar, Asansör – literally meaning elevator in Turkish, which is an elevator constructed in 1907 to help residents reach the top of the hill and now offers a restaurant with a birds-eye view of İzmir – the city's Alsancak district, which still contains many old Ottoman houses that have been turned into bars and teahouses, or you can visit Kadifekale (Velvet Castle) where you will find ruins that date back to the fourth century B.C. You should also take a walk along the Kordon, the waterfront boulevard with a cobblestone boardwalk, lined with palm trees on one side and the Aegean on the other. There, you can also take a ride on a fayton – a horse-drawn carriage – mainly used by the Ottomans for transportation.

Antalya: Antalya is perhaps one of the most famous tourist attractions after Istanbul due to its numerous beautiful beaches and hot weather that can offer you a tan as early as April, combined with its historical sites dating back to ancient times. Located on the Mediterranean coast, it was once a simple Anatolian town famous with for its citrus fruits, but has now become a hot destination – literally and figuratively – for both local and foreign tourists. Antalya has evolved to become one of the very stylish modern cities of Turkey as its tourism sector grew and continues to develop. While visiting Antalya and are away from the beach, you will want to experience the Kaleiçi district, which literally means "inside the castle." Built along its maze-like streets, the district contains small, restored Ottoman houses that have been turned into shops and restaurants for tourists. There are many gates to Kaleiçi and various sections, which appeal to different tastes. Other places you may want to see include Yivli Minare, a mosque with a tall minaret built by the Seljuks, Saat Kulesi – an area with a clock tower built by the Ottomans along with an 18th century mosque nearby – and Kesik Minare, which was used as a temple during the Roman Empire that was later turned into a church and finally converted into a mosque when the Turks conquered Anatolia. Hıdırlık Kulesi is another tower, which you may want to visit for its wonderful view of the marina and harbor, as it is on the edge of the town walls. Many sites in Antalya date back to the Hellenistic era and thanks to excavations in the region, the Antalya Museum also has a significant collection from the region's archaeological sites.