Mount Honaz awaits those who want to enjoy verdant tones 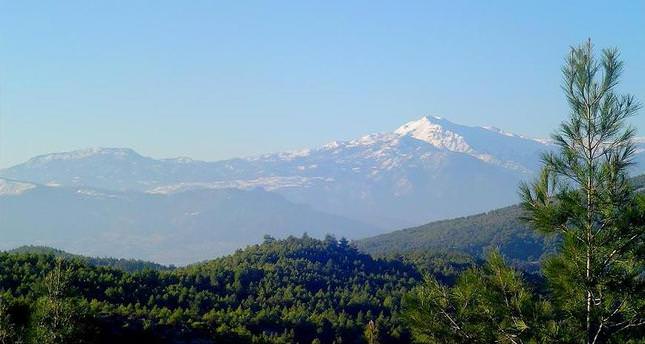 by Gönül Aydemir Jan 31, 2015 12:00 am
With its history, culture and natural treasures, Denizli, a province in the west of Turkey, holds a significant place in nature tourism due to the high mountains within its borders. At 2,571 meters, Mount Honaz is one of the highest mountains in the Aegean region and is located 17 kilometers to the southeast of Denizli. Consisting mostly of steep cliffs, the grandeur of this mountain charms those who see it.

Easily visible from many settlement areas of Denizli and particularly the city center, Mount Honaz, during the warmer seasons is an array of greens, and come winter, it turns pure white under a thick blanket of snow. At the same time, since the mountain is covered in vast pine forests, it is possible to witness every tone of green all year around. Dominated by a different color each season, Mount Honaz, which impatiently awaits spring for the reawakening of nature, is adorned in the most beautiful colors of wild trees and macchia vegetation cover during this period. The wild trees that blossom with the awakening of nature stand witness to an array of vibrant colors.

The sweet scent that remains trapped under snow throughout the winter is released and envelops the entire mountain, giving the glad tidings that spring has arrived on Mount Honaz. With the warmer weather, the melting snow brings the creeks to life, adding a different dimension to this beauty. Powerfully flowing through the green valleys, the creeks give life to many villages of Honaz. During the peaceful atmosphere of spring, interesting animal species also come out of their homes to witness the reawakening of nature.

The hidden beauties of Mount Honaz waiting to be discovered, offer nature walkers a rare adventure 12 months of the year. Those who tread the steep slopes of the mountain experience the privilege and pleasure of being within nature.

Saklıgöl, a hidden paradise in the Yukarıdağdere village of Honaz, is a lake that gushes with water and is dressed in every tone of green in the springtime, quite difficult to reach during winter. Frequented by numerous picnickers as early as April, the lake is also home to amateur fishermen. When the air is still, the reflection of rushes in the lake stage presents wondrous views.

Mount Honaz, which generously offers all the beauties of nature, is quite busy during the summer. The suffocating heat that takes over the entire city during this time is not felt at Mount Honaz, hence it is not surprising to see it overflow with nature lovers who desire to be in a cool place.

The subject of many mythological legends, Mount Honaz, which takes its names from the town of Honaz, established at its foot, was declared a national park in April 1995. Its natural resources, historical and archaeological riches, geographical location and extraordinary view were the most important criteria in declaring Mount Honaz a national park.

Covered in different colors each season, Mount Honaz offers a contrasting sight with the arrival of fall. The colors that dominate Mount Honaz during fall add a different ambiance to this natural wonder. Watching the transformation of trees from green to yellow and brown and the feet of the mountain turn yellow followed by various tones of red during these months, is an indescribable experience.

The snow at the very peak of Mount Honaz starts to melt toward the end of summer, filling many valleys great and small in the fall. The many creeks located at the base of the mountain start to flow with the increased rainfall during this time. The scenery that develops in the meantime becomes a sight for sore eyes.

The natural tracks surrounding Mount Honaz like a band are suitable for both professional athletes and those who are simply interested in nature walks. Group climbing is quite popular on the weekends among mountain climbing clubs. As it is located on a vast plain, alternative sports such as parachuting and paragliding are also activities available for the adrenaline-seeker.

With the leaves that fall off the old trees leading to impressive sights along the mountain roads and pathways, one cannot get enough of pleasant and mind-freeing mountain trekking during these times. In addition to those seeking a relaxing venue or just somewhere to become active, the site also draws in a myriad of photographers who choose to settle in at Mount Honaz during these months for the opportunity to capture spectacular shots.

As it is the first place to get snowfall in the Aegean region, Mount Honaz is the messenger of the arrival of winter. Mount Honaz is covered in pure white particularly between the months of January and March. This impressive view dominates the mountain for quite a long time.

While the snow thickness at the peak of Mount Honaz by the end of February, the snow that accumulates here remains without melting for up to ten months. Although it becomes extremely difficult to reach the mountain peak during winter, the scenery it offers this time of the year is magnificent.

Toward the end of March, short-term campers as well as day-trippers who are there for nature walks, flock to the higher sections of the mountain to witness the impressive view of the snow-covered peaks.

If you too want to discover the beauties of Mount Honaz – a different sight every season – waste no time and see this natural wonder.

Another must-see site when in Denİzlİ: Pamukkale

Known as Hierapolis, Pamukkale ("cotton castle" in Turkish) is considered a gift of nature. Being famous for its hot springs and travertines – terraces of carbonate minerals left by flowing waters – Pamukkale calls on those who are looking for a relaxing experience. There are dozens of remains from the ancient city of Hierapolis, including Greek monuments, around the city. With remains from different civilizations, natural wonders and pure white travertines, Pamukkale has three different thermal regions – Sarayköy, Karahayıt and Gölemezli – that are widely accepted as health-invigorating places with springs and mud baths. In Pamukkale, you can spend a day or just a few hours having a completely organic cure for your skin problems, followed by a visit to the amazing travertines where you can see an example of the spectacular beauty nature has to offer.