ANATOLIA: The cradle of history, fertility and culture 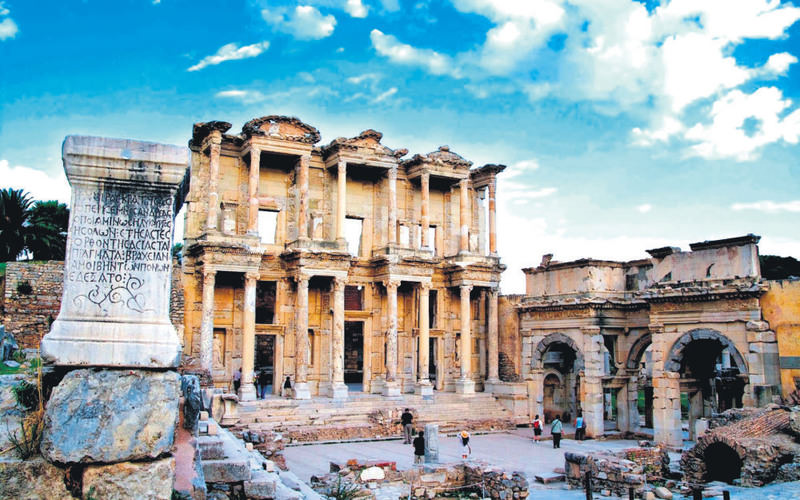 Being home to many civilizations over the course of history, Anatolia hides many ancient cities that will amaze you, while showing how the past has left its traces on one of the most culture-filled regions on Earth

From east to west, the route of civilization had always been somewhere in Anatolia. In each city that you visit in Turkey, you will find traces of people who walked on the same ground ages before you. Known as the cradle of civilization, Anatolia has been the home of many civilizations from the smallest to the greatest empires due to its fertile lands. They all left their traces, making Anatolia a place where the footprints of unknown ancient civilizations are still waiting to be discovered. Anatolia serves as an answer to the modern world's increasing eagerness to learn about those who lived before us. From antique cities to modern ones, Anatolia is like a mother cuddling today and yesterday at the same time, and Anatolian people are very lucky: Under each piece of soil they step on, there lies history. Accepted as the homeland of Indo-European languages, human habitation in Anatolia dates back to the Paleolithic Age. While it is the home of the oldest known monumental structures, Anatolia is also where the Neolithic Revolution began along with the Levant and Mesopotamia. Divided by historians into tribal regions such as Lydia, Lycia, Caria, Mysia, Bithynia, Phrygia, Galatia, Lycaonia, Pisidia, Paphlagonia, Cilicia and Cappadocia, Anatolia welcomed many empires from the Hittites to the Byzantines. Let's take a look at the remnants of some of the civilizations that once existed in Anatolia.

Ephesus in the western province of İzmir

Located in the western Turkish province of İzmir, Ephesus (known as 'Efes' in Turkish), is one of the ancient Greek cities in the region. Built in the 10th century B.C., the city was founded by Attic and Ionian colonists. The Temple of Artemis in the city is the most well-known ancient remnant, since it is considered one of the seven wonders of the world. So in order to experience one of the seven wonders, visiting Ephesus must be on your list. This ancient city was one of the seven churches of Asia, as cited in the Book of Revelations. Along with the Temple of Artemis, the House of the Virgin Mary is another destination that makes Ephesus worth a visit, as legend says that the Virgin Mary spent her last days in Ephesus, and since the 19th century, the house of the Virgin Mary has been regarded as the place where she spent her final days. Many Catholics on pilgrimage visit the House of the Virgin Mary. The ancient city of Ephesus is also believed to be where the story of the Seven Sleepers took place. According to Muslims, Catholics and Orthodox Christians, the seven sleepers slept in a cave in Ephesus for centuries since they were persecuted for their belief in God. To be part of this mesmerizing journey into the past, Ephesus is only a short flight from Istanbul. You need to fly from Istanbul to İzmir's Adnan Menderes Airport, and then rent a car to head towards İzmir's Selçuk district where Ephesus awaits.

Çatalhöyük in the central Anatolian city of Konya

Located in the Cumra district of Turkey's central Anatolian city of Konya, Çatalhöyük is among the oldest human settlements dating to the Neolithic Age, that is, to 7,400 B.C. to 5,200 B.C. Çatalhöyük is considered the largest and best-preserved ancient site from that time period. Çatalhöyük was included on UNESCO's list of World Heritage Sites in 2012, and since then, measures to protect the ancient remains have improved. Standing as proof of the development of civilizations and social life, the site includes houses that are decorated with wall paintings, sculptures and other features of the Neolithic Age's housing aesthetics and architecture. Those who want to discover life in ancient times can see the site and houses with their interior and exterior designs, while also witnessing ancient social life, culture, religion, agriculture and domestic life. In Çatalhöyük, you can spend a day exploring the houses and later you can visit Konya's city center, which is one of the largest provinces in the country and known for Rumi's doctrines.

Zeugma in the southeastern city of Gaziantep

The ancient city of Zeugma in Gaziantep's town of Nizip was founded by one of Alexander the Great's generals in 300 B.C., and was originally called Selevkia Euphrates. Accepted as one of the four biggest cities of the Commagene Kingdom, Zeugma was conquered in 64 B.C. and ruled by the Roman Empire, which renamed the city Zeugma – meaning bridge or passageway. Witnessing huge wealth and glory at the time of the Romans, the city was important due to its geo-strategic location along the Silk Road connecting Antioch to China. In 256 A.D., the city was invaded and completely destroyed by the Sassanids, and later again by a huge earthquake that buried the city. Due to the invasion and the earthquake, the city and its magnificent structures sadly were lost for a long age. In the 1980s, the Gaziantep Archaeology museum conducted the first excavation in the city and found graves and statues. But the main excavation that unveiled beautiful mosaics was conducted in 1992. This excavation brought Zeugma onto the archaeological scene and attracted many foreign and local tourists to view its glorious mosaics. There are also many villas, an amphitheater, baths and temples waiting beneath the ground to be uncovered. It can also be said that the real beauty of Gaziantep is much more than what we can see above ground. If you are interested in history and ancient civilizations, Zeugma should be at the top of your must-see list when you visit Turkey.

Hierapolis in the western province of Denizli

Located near the western province of Denizli, Hierapolis is an ancient city that is on UNESCO's World Heritage List. It is near the natural wonders of Pamukkale (cotton castle in Turkish), which is renowned for its springs and healing thermal waters. Hierapolis, which flourished during the Roman period, is the site of many museums, churches and outdoor facilities, and considering the natural wonders and historic remnants, it is definitely worth a visit. The theater of the ancient city is where gladiators fought. According to Christians, Hierapolis is where Saint Philip, a disciple of Jesus, was murdered, so it is considered a sacred destination. Both the natural wonders around the province and the ancient sites take Hierapolis to the top of any list of historic destinations to visit. It is located in western Turkey, and many tours go to both the Pamukkale travertine and Hierapolis.Mount Nemrut in the southeastern city of Adıyaman

Described as an outstanding natural treasure, Mount Nemrut, with the tumulus containing the tomb of King Antiochus of the Commagene Kingdom, and several giant statues, is a UNESCO World Heritage Site. There are numerous large statues assumed to be royal tombs dating to the first century B.C. Accepted as the highest open-air museum in the world, Mount Nemrut is located in the Adıyaman provincial town of Kahta, and the beauties of the enchanting 10-meter statues and ancient Commagene sanctuary are mesmerizing. The mountain is believed to have been a place for worship in ancient Anatolia, and when you visit, you will understand why ancient people chose it as a sacred place. It has been said that Antiochus built a monumental tomb, a tumulus of cut stones built over the tomb and terraces, known as the East, West and North, on the three edges of the tumulus. On the East and West, there are giant statues, inscriptions and reliefs. Five statues portray the gods and Antiochus. Every year, thousands of tourists come to the mountain to witness its history in person, including the artistic achievements of the Hellenistic period, and the fascinating beauty of the monumental sculptures. While the statues are magnificent at any time of day, the mountain offers its best view at sunset. When you see the sun setting on the mountain, you see the breathtaking landscape, so do not forget to take your best camera along.

Göbeklitepe in the southeastern province of Urfa

Regarded by some as one of the oldest temple complexes in the world, Göbeklitepe is reported to be the oldest known sculpture workshop based on the evidence of recent findings. It is on the outskirts of Urfa, and you must see it when you visit the city. Archaeological excavations conducted in the area have unearthed many artifacts, and it is characterized as "the zero point of history," since it dates back 12,000 years. Its fame lies in the fact that it is the largest, most monumental site built when humans were still hunter-gatherers, before the invention of agriculture. Moreover, some of the illustrations there are so amazing that they make modern artists envious. Along with Göbeklitepe, Urfa is also considered a sacred city, since it is called "The City of Prophets," due to the legacy of Abraham, mentioned in all three holy books of the three major monotheistic religions – Judaism, Christianity and Islam. The history of the city, which is considered a crossroads for different faiths, dates back more than 9,000 years, and numerous prophets are believed to have lived there. So, both Göbeklitepe and Urfa are amazing destinations for quick visits in history.
Last Update: Mar 28, 2015 2:09 am
RELATED TOPICS