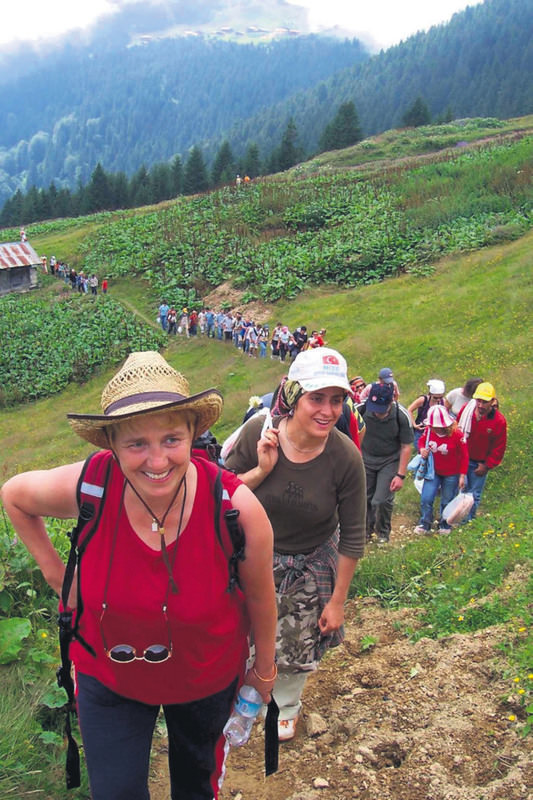 by Anadolu Agency Apr 19, 2015 12:00 am
Situated in Rize's Çamlıhemşin district, Pokut Plateau, which is 2,170 meters high, attracts tourists and nature lovers with its unique natural beauties. The plateau is surrounded by 50 authentic wooden houses, some of which are more than 250 years old, and has become one of the popular gathering places of people who love trekking as well as photographers.

Covered by spruce trees, Pokut Plateau is two hours from the Çamlıhemşin district's center. Following a long, tiresome and tough but entertaining walk, nature lovers pass over the Hazindak and Sal plateaus and discover the other beauties of the Black Sea Region.

Fatma Köse, who came to the plateau to get away from the chaos of the city as well as stressm expressed her astonishment of her surroundings. "The plateau means freedom for people. They are able to live this freedom in this beautiful place." Stating that people can only reach the plateau on foot during this season, Köse said they set off from the village of Şenyuva in Çamlıhemşin with a team of 12 people from the Black Sea Nature Sports Club. "We walked for four hours through two meters of snow before we reached the beautiful Potun Plateau," she stressed. Köse said the team felt like this is a place where human beings can connect with nature. "You are stepping on snow, viewing the Kaçkar Mountains with all their glory; you will not want to wake up from this dream," she underscored.

She also highlighted that people can visit the plateau easily with mountaineering clubs. "We left the plateau after a day of observing nature and getting some nature therapy, away from our usual daily life," she added.
Last Update: Apr 19, 2015 11:43 pm
RELATED TOPICS