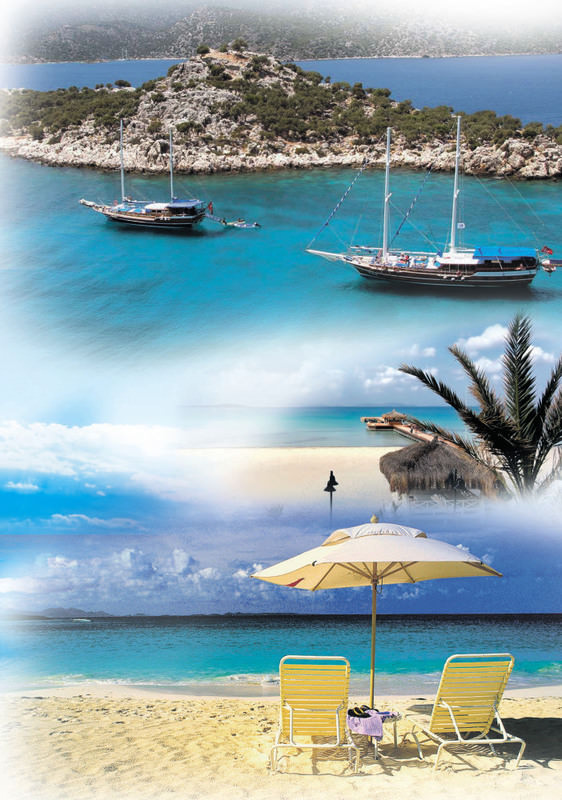 Turkey has the second most Blue Flag beaches according to the 2015 list by the Foundation for Environmental Education (FEE), and they are all ready to welcome you to enjoy their golden sands, deep blue waters and azure skies. This week FEE announced that Spain is the leading Blue Flag country with 578 beaches followed by Turkey with 436 beaches on the Aegean, Mediterranean, Marmara and Black Sea coasts.

If you are making plans for the coming hot summer days or spring break, for an entertaining and relaxing holiday, Turkey's Blue Flag beaches await you.

Even though it is yet not quite the season for swimming yet at many holiday resorts, you can still enjoy stunning beaches along the coasts. Just consider these Blue Flag beaches before making a holiday reservation. A quick reminder: Early booking is a huge advantage in Turkey since most resorts in highly touristy areas will have been already booked by the time summer begins.

You can also visit many historic sites and other adventurous holiday options along with the Blue Flag beaches during your stay.

Here are some of the best eco-friendly Blue Flag beaches and marinas in Turkey whose quality of water is more than enough to satisfy your desire.

Known as the most popular holiday resorts in Turkey, Antalya is one of the few cities that draws the attention of tourists from the Netherlands, Russia, Germany and the rest of the world as a stunning Mediterranean city every year to experience its marvelous beaches and year-round warm climate. This Turkish Riviera has a record number of Blue Flag beaches with 197. The towns of Alanya, Side, Manavgat, Lara, Finike, Konyaltı, Kemer and many more have not only perfect beaches that have been awarded with a Blue Flag to swim, but ancient ruins and villages that you can visit. Among places including these beaches are hotels, villages, campsites and public beaches that you can choose according to your holiday preferences. In Antalya, the most popular beach is Cleopatra Beach taking its name from the beauty of the Queen of the Nile. Located far from the city center, Kas is one of Turkey's best locations not only for its Blue Flag beaches, but also for scuba diving as it has 50 sites, including submerged aircraft and vessels. Selected by the Sunday Times as the Best Beach in the World, 15-kilometer-long Patara Beach in Antalya, situated close to Fethiye, is also the Mediterranean's longest. A true wonder of nature, Patara Beach is surrounded by historic relics and is truly a site to relax in. Side, has nine Blue Flag beaches: Titreyen Göl, Side One, Side Two, Sorgun, Sorgun Two, Side Public Beach, Club Ali Bey, Sol Kamelya and Köymeydanı Beach. It is smaller and more quaint than other Mediterranean vacation spots and is a favorite because of its natural beauty. In addition to visiting historical sites, it is also the ideal spot to enjoy sunbathing and swimming in crystal clear water. The transportation in Antalya is one of the easiest in the country to use. It includes an international airport and all public transport you need to reach your destination quickly.

Blue Flag beaches in MuğlaThis magical city along Turkey's Aegean cost embraces it visitors and marks their hearts with its perfect combination of history, nature and tranquility. Muğla is not only well known for its touristy spots such as crowded beaches and clubbing scene, but also for its calm and peaceful settings that are waiting to be discovered. Home to spectacular landscapes and serene, warm beaches located at the juncture of the Aegean and Mediterranean Seas, Muğla is home to the high-end resort cities of Bodrum, Fethiye, Datça, Ölüdeniz and Marmaris. Many of Turkey's Blue Flag beaches are located in Bodrum, Datça and Marmaris with dozens of beaches. In Bodrum, visitors can see the ruins of the once great Greek city at the Theater of Halicarnassus and the Mausoleum of Mausolus, which is listed as one of the Seven Wonders of the Ancient World. Bodrum also houses the Castle of St. Peter, a large Crusader castle that still remains intact. With a turquoise sea and a bustling beach, Ölüdeniz is also a favorite, especially when it comes to transportation and accommodation options. It is surrounded by a number of vacation resort towns including Ovacık and Hisarönü. Fethiye lies on the ruins of the ancient city of Telmessos and includes many historic sites such as the Tomb of Amyntas and the Telmessos Theater from which many important Greek plays originated. Çalıs Beach is considered the best beach in Fethiye. The beach is especially famous for its tourist facilities and water sports. If you are going on a family vacation, then Çalıs is also ideal as you can enjoy the summer and sun on the 2-kilometer beach.

Blue Flag beaches in İzmirAs Turkey's third largest city on the Aegean coast, İzmir is a renowned holiday resort with vivid summer days, perfect water for swimming and hidden villages on the coast to relax. There are nearly 50 Blue Flag beaches in İzmir with most of them located in the towns of Çeşme, Menderes, Seferihisar, Karaburun Selçuk. In Çeşme, which is Turkey's western-most point with nine blue flag beaches, you will find an array of marinas, hotels and restaurants as well as one of the country's most famous beaches. There are also little tourist spots that are only a drive away from Çeşme. Among those spots, the most popular one is Alaçatı, which you must visit for an unforgettable holiday experience. Selçuk has three Blue Flag beaches and is not only a perfect summer destination, but also a significant historic site to visit, especially Ephesus. Ephesus, "Efes" in Turkish, is one of the ancient Greek cities in the region. Built in the 10th century B.C., the city was founded by Attic and Ionian colonists. The Temple of Artemis in the city is the most well-known ancient remnant, since it is one of the Seven Wonders of the Ancient World. So in order to experience one of the seven wonders, visiting Ephesus must be on your list. This ancient city was home to one of the seven churches of Asia, as cited in the Book of Revelations. Along with the Temple of Artemis, the House of the Virgin Mary is another destination that makes Ephesus worth a visit, as legend says that the Virgin Mary spent her last days in Ephesus. Since the 19th century, the house of the Virgin Mary has been regarded as the place where she spent her final days. Seferihisar and Karaburun are not as well-known as other holiday spots in İzmir since they are hidden secrets that locals mostly visit during spring and summer. There are nearly 12 Blue Flag beaches in these towns.

Blue Flag beaches in MersinLocated on the eastern coast of the Mediterranean Sea, Mersin is a hidden tourist destination for many local and foreign tourists under the shadow of other tourist destinations. The coastline in Mersin extends from the city center to the west. It not only has nine Blue Flag beaches, but also hidden ones that will amaze you. Starting from Erdemli, which is now a part of the city center, the Blue Flag beaches end in Anamur, a town on the border of Antalya. Anamur is the central point of the entire length of the Mediterranean coast as is divided into two parts, the old town that includes a mountain range, and the newer part with concrete blocks used mainly by families. Silifke is another town in Mersin with crystal blue beaches. If what you are looking for is a serene atmosphere to enjoy the sea, you may prefer beaches in the city center. In order to swim you need to drive from the city center to the outskirts in Mersin. Different than other popular Blue Flag destinations, the beaches in Mersin are not suitable for swimming in spring, so the best time to visit is during hot summer days. Mersin locals and tourists from southeastern Turkey generally prefer the tourist towns in Mersin. If you want to get away from the tourist provinces and find tranquility, Mersin is a perfect spot for Blue F?lag beaches.
Last Update: Apr 25, 2015 2:10 am
RELATED TOPICS