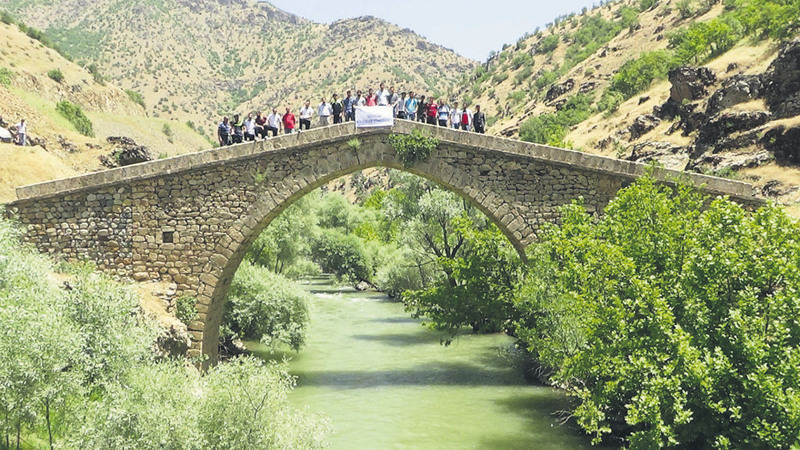 by Jun 12, 2015 12:00 am
Nehri village, located in Hakkari's Şemdinli district, has been one of the most-visited religious tourism hubs since the reconciliation process began and continues to welcome guests from all over Turkey.

As part of the "Cities, Cultures and Regions" project, initiated by the Youth and Sports Ministry, 50 volunteer students from across Turkey traveled to Nehri to visit the tombs of Seyyid Abdullah and Seyyid Taha – two of the most important 18th-century evliyas (Muslim saints).

The group also unveiled a banner bearing the name of the project and posed for the press in attendance. Following the photo shoot, the students and ministry representatives sang Kurdish songs, danced the halay (an Anatolian folk dance) and attended a banquet catered with local dishes. Although it was very hot, the group managed to visit the famous Kayma Palace.

Youth Center Director Fahri Güldal said they took 600 young people from Hakkari on a tour around the region as a part the "Cities, Cultures and Regions" project. "The aim of our project is to educate young people about the history of their region and organize tours to the historical places in the region, province and district. Through this project, we intend to help youth meet different people and learn about the different cultures endemic to the various provinces of Turkey," Güldal said. He added that they gathered 50 young volunteers as part of the project and traveled to Şemdinli to get to know the district better. "Here, we began our tour with a visit to the tombs of important 18th-century evliyas and the Stone Bridge in Nehri," he said.

Rızgar Elmas, one of the members of the Youth Center, said, "We had a chance to see many historical places in Şemdinli with our friends from the Youth Center. Thanks to this project, we have seen that our city is rich in terms of history and natural beauties." Elmas also thanked provincial directorate of youth and sports as well as the ministry.
Last Update: Jun 12, 2015 11:21 pm
RELATED TOPICS