A recipe for love: Destinations filled with love stories across Turkey 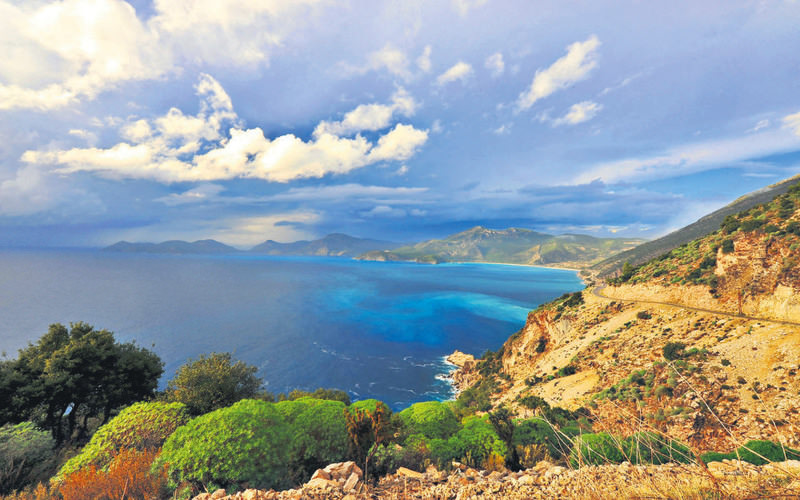 Turkey, home of many touching romantic legends, calls you and your beloved to hear the past tales of lovers who lived many years ago

With summer just arriving, Turkey once again has turned into a popular spot for summer holidays filled with joy, serenity and romance, especially if you have "the one" by your side.

Turkey has many different options for couples to mark their days with romance. From the highly populated holiday resorts to the serene villages, you will feel as if only you and your lover are left on earth, as Turkey offers you the most romantic atmospheres to spend your summer voyage.

Travelling alone is good, travelling with your loved one is even better, but experiencing a love story belonging to those who lived many years before you is the best. So, as the sun shines upon you, you should take your loved one and visit the many romantic Turkish destinations to hear the love stories that will touch your soul. While choosing where to experience your love story, you should remember that many tales of love, that the world admires today, began in Turkey, a land that has been the stage of the biggest love stories throughout history. So, if you would like to experience the mesmerizing face of love, Turkey awaits you to witness your love story as well.

Ölüdeniz, in the touristic province of Muğla, lies on the turquoise western coast of Turkey. It is one of the most well-known holiday spots and every year it hosts millions of tourists who come to see this beautiful lagoon. Literally meaning "Sea of the Dead" in English, Ölüdeniz takes its name due to its calm waters even during harsh storms. To see the waters of Ölüdeniz, you must pass through a narrow strait between two steep slopes covered with pine trees. The love story behind Ölüdeniz stems from its geographical features. According to legend, vessels going through the Aegean Sea cast their anchors in the deep sea and used boats to reach the shore, so as to find drinking water. One day, a young man travelling with his father saw a beautiful girl named "Belcekız." When he came ashore for the drinking water, the two fall in love with each other immediately. After that day, she waited for him for months on the shore to see him again. The young man came back to the lagoon to see his lover's beautiful face every time he was near the Aegean Sea. One day, when a harsh storm hit the sea, the young man tells his father about the lagoon and says that it is safe and sound to land there during the storm. But his father does not believe him and thinks that the young man is ready to wreck the ship, just for the girl. The dispute between the father and son grew, as the ship was about to hit the steep slopes around the lagoon. While trying to save the ship, the father accidentally pushed his son into the huge waves of the Aegean Sea. The young man died right as the father saw the calm waters of Ölüdeniz. Feeling unbearable pain for the young man, Belcekız threw herself over one of the slopes. Since then, where she died has been called Belcekız, and the lagoon is called Ölüdeniz. The locals believe that the changing color of the waters, according to the daylight, symbolizes the pain of the girl and the young man. 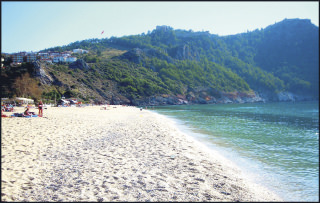 Imagine an island completely belonging to you. While some live their love stories in modesty, some want to show the burning flame of love in their hearts. Most likely, Mark Antony and Cleopatra belonged in the second group. Cleopatra Island, which is also known as Sedir Island in Turkish, is near Muğla's touristic town of Marmaris. Named after the beautiful and exotic queen of Egypt, Cleopatra looked for eternal beauty on the sands of this island. Cleopatra is still among the top 10 destinations in the country and the legend says that the natural landscapes and turquoise water of the island put a spell on her, as the island is believed to be where the Egyptian queen gilded the lily. Cleopatra Island is unique and under protection due to its sand formations, which cannot be found on any other beach around Turkey. The government ruled that removing any sand from this unique place is illegal, which is why visitors are not allowed to carry beach towels and bags on to the shore.

It is also strictly required to take a shower before leaving the island. This beautiful island symbolizes a legendary story of the two historic figures, which is why it captures the attention of more and more tourists every year. According to the legend, the sand on Cleopatra Island was shipped from North Africa by Anthony as a gift to his love in 60 vessels. The legend says that Cleopatra came to the southern region of Tarsus in Turkey to visit Antony and while she was passing through the Aegean Sea, she saw the island and landed there to spend some time. Even though she adored the island, she is annoyed not to see any sand on the beach and mentions the situation to Antony. To make her happy, Antony immediately ordered to fill the island's beach with one of the most unique golden sands on the earth. What makes this island special apart from its unique and magical sand, is its numerous historical structures waiting to be visited. Dating back to the Greek Spartans, there are Greek and Roman remains on the island. 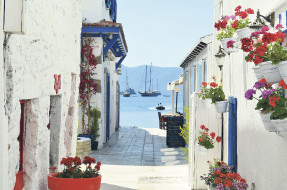 Located in Bodrum, which is one of the most popular and beautiful touristic locations in Turkey, Bardakçı Bay is home to the legend behind how Hermaphrodite occurred in Greek mythology. While visiting Bodrum, you will feel the enchanting atmosphere due to the interaction between today and the remnants of history. Bodrum has so much beauty that it will make you think no other place deserves to have so many legends compared to this location. Today's popular destination Bodrum with its vivid nightlife, crowded streets and white houses is believed to host many legends from ancient ages, especially from Greek mythology. 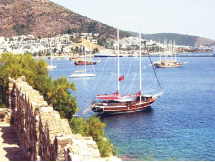 According to Greek mythology, the goddess of beauty Aphrodite gave birth to a boy named Hermaphrodite after she made love with the trade god, Hermes. Hermaphrodite was such a handsome young man that a water nymph, Salmakis, became enamored with him when she first saw him walking through the Bardakçı Bay. Not being able to endure the burden of this love, Salmakis ran to Hermaphrodite and held his hands and asked him to live with her. Hermaphrodite got so shy that he left there immediately and sat under a palm tree to cope with his excitement. After a while, Salmakis found Hermaphrodite bathing in the calm waters of a river in the Bardakçı Bay and embraced him in the river closely while begging to the Greek Gods: "Please, never leave us apart. We are like one soul in one body." The Gods had mercy on her and united them in one body that has two genders.

No limit when it comes to love, Amasya 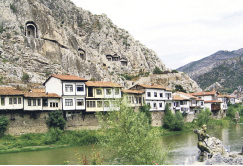 Located approximately 100 kilometers away from the Black Sea coastal province of Samsun, Amasya is home not only to friendly locals but also their legends. Even though it is not as popular as other holiday destinations around Turkey, Amasya, which is located off the beaten track, deserves a visit to hear the Turkish folk story about two lovers, Ferhat and Şirin. The legend said that Şirin is the one and only daughter of the Sultan of Amasya. The Sultan ordered the building of a palace for Şirin to show his affection to her and asked Ferhat to decorate Şirin's quarters, as he was a highly skilled carpet weaver in Amasya. As the story goes, Ferhat and Şirin desperately fell in love with each other and wanted to get married, but the Sultan did not accept the marriage. When he saw the desperate love of his daughter, the Sultan declared that if Ferhat managed to bring water to Amasya, which had little water then, out of the mountains, he would let them get married. 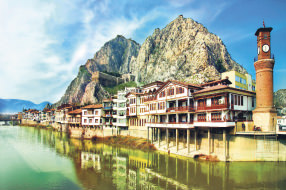 Even Amasya's geographical features, which are nestled between steep rock cliffs, is not enough to make it happen, and the Sultan declared that no one was to extend a helping hand to Ferhat and he could only use a hammer and a chisel. Climbing up the mountain, Ferhat set to work to bring the water to Amasya for the sake of love. Şirin came everyday to watch his progress as it took 10 years for him to bring the water. But sadly when he pounded into the mountain's water reservoir for the last time, the water gushed out down into the valley and Ferhat was not fast enough to save himself from drowning under the flood water. Seeing her love dying, Şirin could not stand it and commited suicide. After the dramatic death of these two lovers, the Sultan in remorse, allows them to be buried side by side, but also wants himself to be buried right between them when he dies. According to the legend, each year a rose grows out of Ferhat's and Şirin's graves, but a thorn arising from the Sultan's grave separates these two lovers again and again.
Last Update: Jun 19, 2015 10:07 pm
RELATED TOPICS