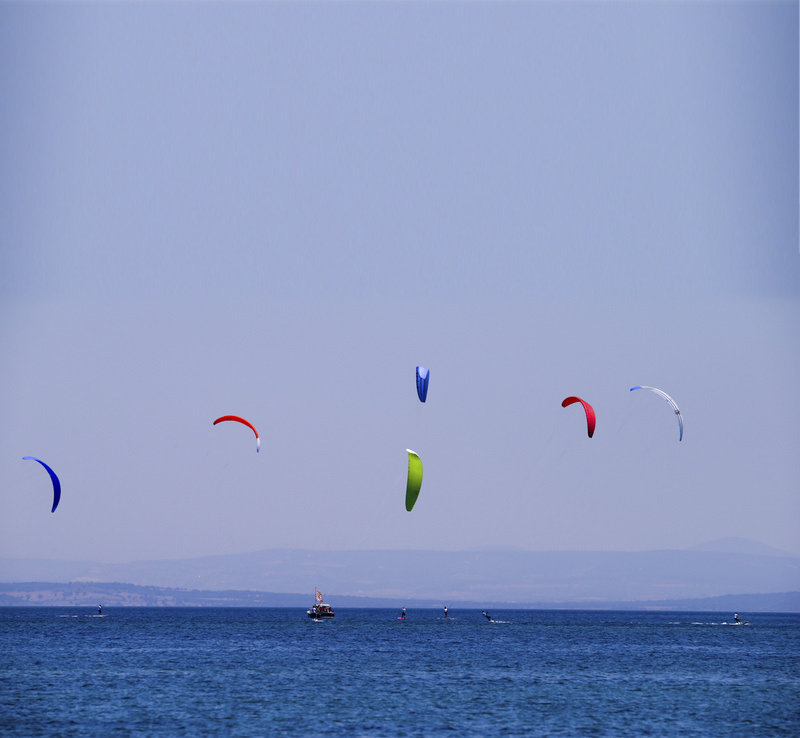 Full of sports, music and recreational activities, the Mercedes-Benz Go Bozcaada Festival will run until June 28 in Bozcaada (Tenedos), a beautiful and charming island in the Aegean Sea. The festival offers several sports activities focusing mainly on kiteboarding and cycling

A first of its kind, the Bozcaada Festival began on June 23, and is organized by the International Kiteboarding Association (IKA) and Playmaker and is sponsored by Mercedes-Benz Türk. Gathering Europe's best kiteboard surfers, the Kiteboard European Championship, one of IKA's most important events, was initiated as part of the festival. The championship offers an incredibly exciting racing program for kiteboard lovers. On the first day of the event, fierce competition heated up among European kiteboard surfers from 12 countries. They will continue to feel the invisible tug of the wind against their body while heading along Bozcaada's cold water on kiteboards until the competition ends on Sunday. Hosted by the Çanakkale Governorship and the Bozcaada Municipality, the festival will continue each year on the island.

For the Kiteboard European Championship, famous sportsmen from Germany, Bulgaria, Spain, Canada, United Kingdom, Poland, Russia, Slovenia, Spain, Croatia and Lithuania flocked to Bozcaada. They prepared for the race by working out at Çayır Beach. Some of the notable surfers attending this year's event are Florian Gruber, Maks Zakowski, Oliver Bridge and Elena Kalinina. Vanessa Ginyol, Eray Özgülnar, Ejder Ginyol and Armaian Ersolak are representing Turkey in the championship. National kiteboard surfer Bilge Öztürk is racing against her challenging rivals, too. The winners in the men and women's categories will share a $15,000 prize.

Throughout the festival, Bozcaada is also hosting other entertaining sports events like bicycle tours and SUP races, the "Bozcaada 10k Run" and "Bozcaada Freestyle Open," as well as concerts by local and foreign bands. While beach parties are being held during the day, DJs and live performances are entertaining people throughout the night, for an unmatched experience.

Bozcaada's first kiteboarding school - Kite Lounge - was established in Çayır Beach. The lounge offers services to kiteboard lovers and those who are interested in the sport. Throughout the 2015 summer season, Bozcaada visitors will have a chance to try out this thrilling sport with the company of experienced kiteboard trainers and have fun by attending various activities held as a part of the festival. Moreover, festival lovers will find an opportunity to take a closer look at the iconic Mercedes-Benz G series, which has been in production since 1979 for off-roading.

The festival is also hosting Bozcaada Freestyle Open competitions where attendees will witness the dance of the best riders in the world. AkçanSa, Arbella, Canon, the Çanakkale Miners Association, Kollektif, Magna Hotels, Miller, NTV Sports, POWER FM, Red Bull, the Turkey Sailing Federation, Vestel and OLİ are all among the co-sponsors of the festival.