Book your ticket for White Nights of St. Petersburg 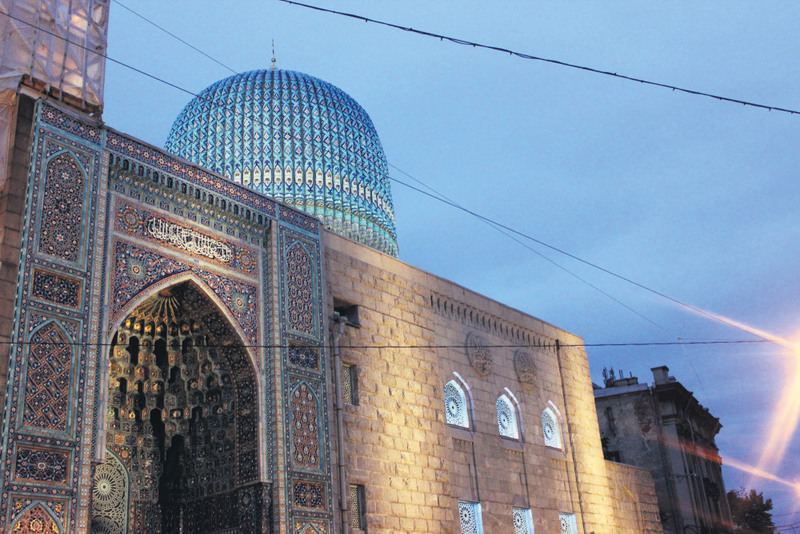 With its glamorous, old stone buildings, canals and huge cathedrals that carry traces of history, St. Petersburg is one of the world's must-see cities

"Venice of the North tour, just 550 rubles [$9.70]," said the Uzbek man, who was trying to attract people to the boats that pass through the canal rounding the city. He said these words in Turkish after he gave up on Russian realizing that my friend and I were speaking Turkish.

The term "Venice of the North" actually refers to the various cities in northern Europe that contain canals similar to the Italian city of Venice, which is famous for its narrow canals and small islands. This description is also accurate for St. Petersburg since the city is renowned for its canals that connect to the Neva River and its stone buildings featuring old architecture that surround the canals flowing inside the old capital of the old Russian Empire.

St. Petersburg was established by Tsar Peter the Great in 1703 and it had been the imperial capital of Russia for two centuries. In 1918, the Soviet government moved the capital from St. Petersburg to Moscow. Still, it is the second-largest city in Russia after Moscow with 5 million inhabitants. 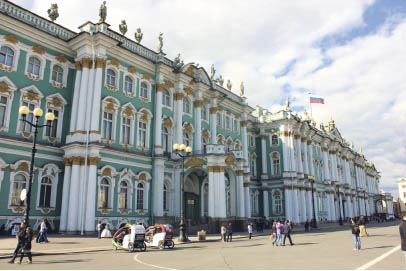 Being a cultural capital of Russia, St. Petersburg is home to The Hermitage, one of the largest art museums in the world, as well as various kinds of landmarks and historical buildings, specifically historic cathedrals.

Like many other cities, if you are a tourist, it is better to look up the locations that you plan to visit online and prepare a time-efficient plan before you arrive. In St. Petersburg, a good starting point for your journey can be St. Isaac's Cathedral. 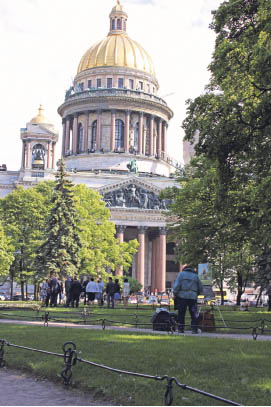 The closest public transit access to the cathedral is Admiralteyskaya metro station, which is located 10 minutes away by foot. 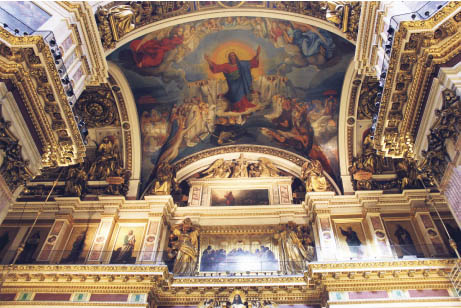 As you approach the cathedral, you will see the engraved objects ornamented on the facade of the building that gives a fascinating appearance. There are two kinds of tickets at the entrance that enable visitors to either enter the cathedral, which costs 150 rubles, or climb to the colonnade that surrounds the building, which costs 250 rubles. Inside the cathedral, there are even more stunning decorations. While climbing the stairs of the colonnade might be tiresome, it is a worthwhile process. As you continue to climb up the stairs it presents a great city view where you can snap beautiful photos.

After the cathedral, you can walk to Palace Square, which is considered one of the main squares and the heart of the city. The Alexander Column, located in center of the square, is a monument that was erected to honor Tsar Alexander I after the Russian victory against Napoleon. The square is surrounded by the Hermitage Museum and the General Staff Building. Even if you do not ordinarily go to museums while you're traveling, the Hermitage Museum is a must-visit destination in St. Petersburg. After waiting in line for about half an hour because of the huge tourist groups that flock to the museum, you can buy an entrance ticket to the Main Museum Complex for 600 rubles. However, you have to pay extra to visit its other branches, such as the General Staff Building, the Winter Palace of Peter the Great, Menshikov Palace and others. The Hermitage Museum was the only building that I felt the absence of a tour guide since the complex is home to 3 million items spread out over 400 different halls, including great collections of Western-European paintings and sculptures as well as antique Roman and Greek art. If you are the kind that must see all items, prepare yourself to spend the entire day inside the museum.

After your visit to the Hermitage Museum, it is time to walk to Nevsky Prospekt, the main avenue of St. Petersburg. There are many must-see places situated on this large avenue, including Kazan Cathedral, the Russian National Library, the Great Gostiny Dvor – an 18th century shopping mall – Elisseeff Emporium – a retail and entertainment complex – and more. This part of your trip can take shape depending on your interests. As I do not have any interest in shopping and was completely satisfied with museum visits after visiting the 4-5 hours I spent at the Hermitage Museum, I headed toward Kazan Cathedral, a captivating 19th century cathedral built by empire-style design. Huge columns welcome you outside as you approach this huge cathedral. As opposed to of St. Isaac's, which is seen as a more touristic place, you may see a lot of worshippers waiting in line to light a candle inside the church, whose interior design features numerous sculptures and icons created by the best Russian artists of its day.

After you leave the cathedral, I recommend crossing the street and walk for a couple minutes along Griboyedov Canal, as this street leads to the Church of the Savior on Spilled Blood, also known as the Cathedral of the Resurrection of Christ, and one of the main tourist attractions in St. Petersburg. The church was built to honor Alexander II on the site of tsar's assassination in 1881. This is where it gets the "spilled blood" part of its name. The church resembles St. Basil's Cathedral in Moscow with its richly decorated facade and onion-shaped domes. The building also serves as a museum for most of the day and admission costs 300 rubles. Once you enter the church, you will see that almost every part of the interior design is replete with glamorous mosaics of religious icons. I am guaranteeing that it is totally worth it visit the church.

All the aforementioned places are located fairly close to each other. Depending on how quick you are, it is possible to visit all of them within two days. However, I recommend sparing a specific day for the Peterhof area, which is far away from the city center. Peterhof is one of the hottest tourist spots of the city and features palaces, gardens and the Grand Palace of Peter the Great. Peterhof is accessible by various transportation means. You can reach there by boat from near the Winter Palace in the city center or you can use public transportation. For the latter, follow the red metro line to the Avtovo metro stop and then use either public transit or private van services that make regular trips to Peterhof. The Upper Gardens and fountains, which welcome you at the entrance of Peter the Great's palace, are freely accessible; however, entrance to the Lower Gardens and landmarks inside of the palace requires an admission fee, which varies between 500 rubles and 1,000 rubles depending on how much you want to see. 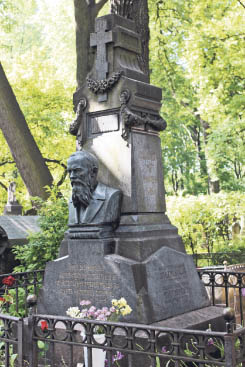 These are some of the main tourist destinations, but there are many must-see places apart from these. I visited the Tikhvin Cemetery, where many famous Russian figures are buried, including Tchaikovsky and Dostoyevsky, and the beautiful and historic Peter and Paul Fortress on Zayachy Island, which serves as a museum. I also recommend visiting Vasilyevsky Island. There are some landmarks you can visit on the island, or you can just enjoy the great scenery of the city near the bridges that connect the island to the main part of the city. Surely, you have to also experience a canal tour inside the city.

Because I am Muslim and do not eat pork, I was not able to taste much Russian food. However, there are many restaurants, especially across Nevsky Avenue, that offer various kinds of traditional Russian meals. If you are trying to stay away from pork, you also have a lot of options, as many global fast-food chains like McDonalds, Burger King, Sbarro and Subway have numerous branches in all corners of the city. The prices are considerable, however. You can also have a standard meal for about 400 rubles to 500 rubles at a regular restaurant. Tea was the only thing that can be regarded as expensive compared to Turkey.

The city has a well-connected transportation system. Most parts of St. Petersburg are connected to each other with metro lines. Additionally, there is a well-functioning bus and minivan system. Both options are inexpensive, and you can buy a coin for the metro for 31 rubles and a bus ticket for 28 rubles.

Language is an issue in St. Petersburg. I was well aware that I am not going to visit a Northern European country, for instance, where most people can speak English. So, I was not expecting a huge English-speaking population. However, the main problem in Russia is the lack of the ability for people to speak English who are supposed to be know the language. For example, when you are passing through passport control, the officer who is responsible for checking your documents may say "tourist" with a rising tone and an unusual accent, which is supposed to mean, "Are you here for a touristic purposes?" Or the person inside an information kiosk at an airport may only speak to you in Russian. I became acquainted with only a few people who could fluently speak English during my visit.

Before my visit, I read about other people's experiences in St. Petersburg and some of the comments caused me to worry. People were especially complaining about corrupt police officers and cold people. Honestly, though, I did not experience these issues at all. The police were not interested in the people on the streets and citizens were friendly with me. Maybe I was luckier than other people, however. But if you experience an unpleasant situation, I am sure that you will be at peace once you witness the fascinating atmosphere of St. Petersburg. I recommend that everyone visit this captivating city for at least a couple days, especially in the summertime to see the city's beautiful "White Nights," only if you do not have insomnia, of course. You can be sure that you will not regret your decision.
Last Update: Jul 03, 2015 10:44 pm
RELATED TOPICS