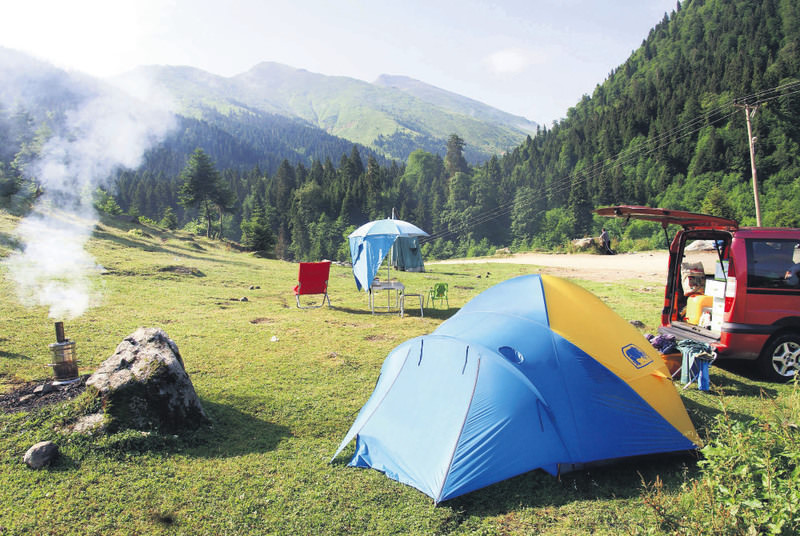 For those who want to have a serene camping experience hidden among natural beauty, here is the ultimate list of Turkish camping sites

All of the entertaining and crowded holiday resorts do not mean that Turkey has only one definition of a holiday. With its many amazing campsites, you will learn the language of nature, and this summer Turkey is inviting you to take a camping trip.

With every shade of green, as well as pure blue waters and the warm sun shining upon you, a camping trip this summer may be all you need to refresh yourself.

Olympos, located in the southern holiday region of Antalya is probably the most well-known camping site in Turkey with its great facilities that allow you to camp for days and days. Generally preferred by younger couples and teenagers, Olympos camping site is situated on the skirts of Mount Olympos. Since the entire holiday spot is mostly arranged according to the needs of campers, it is one of the best places for you to commune with nature. The ancient site on the way to the Mediterranean Sea and the oxygen-filled air waking you up early in the morning makes Olympos a hidden heaven on Turkey's southern coast.

Located in Cappadocia, which is one of the most renowned wonders of nature from ancient times with its incredible geological transformations, Ada Camping Avanos offers you both an opportunity to discover Cappadocia's natural beauty and to camp in luxury at the same time. Camping is not always about leaving the luxuries of the world behind; it can be perfect for both those seeking comfort and those who opt only to take a backpack. If you want to live both in the pocket of nature and have your home comforts, camping sites in Avanos are a great option for you.

Urla is a little district in the renowned holiday destination of İzmir, unknown to most foreign tourists. What gives it a perfect atmosphere is its crystal-clear waters and beach, which is suitable for campers. Demircili Bay Camp, right next to the Aegean Sea and only 38 kilometers from İzmir Adnan Menderes Airport, makes your camping dream come true with its serene atmosphere. During your stay in the camp, you can also try fishing. For an unforgettable camping experience near the sea, Urla Demircili Bay Camp should be on your bucket list.

Nested among cedar trees and the Köprü River, the canyon embraces adventurous spirits looking to explore an unspoiled landscape in Antalya. Resembling another natural wonder of Turkey, the Fairy Chimneys, Köprülü Canyon 'one-ups' them, thanks to its river. You can get a shot of adrenaline from river rafting and enjoy getting wet in the crystal-clear spring water and rapids of all sizes. Be assured that when you arrive at the canyon for camping, you will be mesmerized by the spectacular view of the Taurus Mountain and the surrounding national park.

Known as the oxygen haven, the Kaz Mountains near the northwestern city of Balıkesir has the highest ratio of oxygen in the world together with the Swiss Alps, so it makes a perfect spot for an oxygen-filled camping trip. Also called " Mount Ida", the mountains separate the Aegean and Marmara regions in Turkey, and it is referred to as "the house of Gods" by Homer in Ancient Greece. Hızır Camping Site in the Kaz Mountains is one of the most suitable places both to enjoy the nice refreshing weather and the beautiful scenery. If what you are looking for is to be in the arms of nature and to breathe some fresh air into your lungs, let the road lead you to the Kaz Mountains.

Yedigöller National Park is almost like heaven on earth with its beech trees, oaks, mahoganies, alders, elms and firs that embrace the land. If what you want from camping is to feel nature that seems like something out of a pastoral masterpiece by a painter, Yedigöller is the perfect camping spot for you. The place is suitable for camping not only in spring but also year-round. Nature photography, painting, hiking, angling and lake fishing are among the activities available in Yedigöller. Bear in mind that there is no power at the camping site.

Located in the foothills of the Kaçkar Mountains, Ayder Plateau is one of the few places near the Turkish Black Sea Coast where you can enjoy every shade of green. Ayder Plateau is mainly known for its simplicity and untouched nature. Ihlamurlar Altında Camping Site on the plateau has a café, a market place and toilets to facilitate your camping activity. If you visit the plateau, you will see how the Black Sea coast differs from other coastal holiday destinations. The cuisine and regional traditions will capture you immediately and you will never want to leave.

Known as the one of the most renowned holiday destinations in Turkey, Muğla province has an amazing campsite in its Datça district. Aktur Camping Site, which has always had the best bay in Turkey in recent times, is like a tourism haven for those who visit. Nestled among pine groves, Aktur is where the green forest meets the sea. The camping site has banking, a pharmacy, a post office, marketplace facilities as well as offering sailing course, restaurants and cafes, so if you want to experience luxurious camping, two sites located in Aktur are the perfect choices for you.

Bozcaada Camping, in the western province of Çanakkale, draws attention with its tranquility and natural beauty as well as its proximity to other holiday spots with their vivid night life and crowded tourist destinations. Nearly the entire camping site is filled with pine groves and gives you the opportunity to get away from the hustle and bustle around the province. To spend time in the camping site, you do not have to bring your own camping gear, since the site can provide it for you. You can also stay in the bungalows located on site.

In the famous holiday destination of Muğla, Akyaka is a real hidden gem with its perfect atmosphere suitable for camping. Surrounded by pine trees on the Gulf of Gökova, Akyaka, once a small fishing town, is the home of Akyaka Forest Camp that has both camping and RV facilities. Toilets, electricity and shops can also be found on the campsite. Listed as a cittaslow in 2010, Akyaka is where you can find absolute peace with no traffic, no loud music and no noise. This magical town not only features organic foods and a serene daily life, but also nature-centric sports and activities such as windsurfing, biking, kitesurfing, sailing, paragliding, rafting, trekking, riding, rock climbing and sea kayaking.

Camping in Kaş, which is one of the most popular holiday spots in Turkey, draws tourists' attention with its proximity to the main city center. Even though it is only walking distance to downtown, it is far away from the hustle and bustle. There are modern wooden houses, RV and camping facilities on site. It is one of the most suitable camping sites for those who want be near the sea and surrounded by greenery at the same time. There are also diving facilities that you can try during your camping experience, since Kaş is included in the world's Top 100 diving destinations.

Cunda Island is located where the Aegean Sea begins. Even though it is called an "island," you can reach this fascinating place by car. Cunda Island, which means "Fragrant Island" in Romaic, thanks to the silverberry fragrance surrounding the entire island, is a place that should not be missed. Cunda Island in Balıkesir awaits those who would like to experience island camping, since the main transportation to the island is via boats heading out to the sea. Ada Camping Site in Cunda is a suitable holiday resort with bungalows and campsites. The camping site has its own beach as well as toilets, an aquarium and basketball facilities. The site is suitable for trekking, cycling, diving and fishing.
Last Update: Jul 10, 2015 9:16 pm
RELATED TOPICS