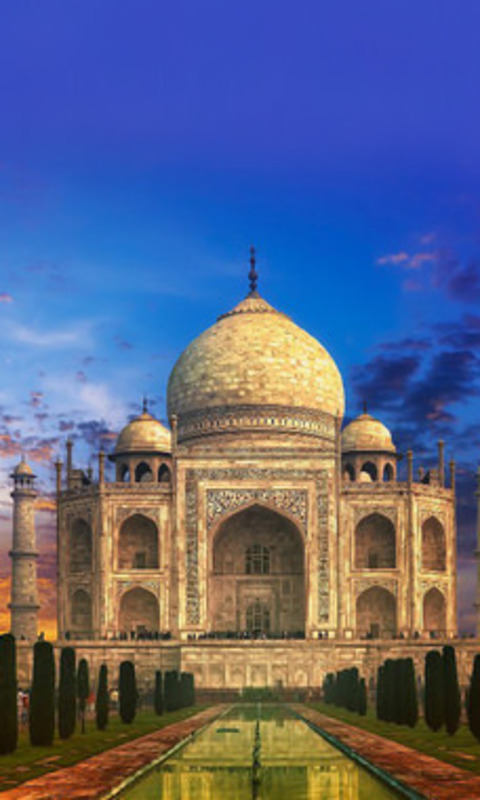 As summer vacation time is here, tourists preferring to see famous monuments in various countries such as Greece, India and Mexico, travel in droves to spend their holidays amid history's great architecture

Structures with astonishing mathematical properties have always awakened people's attention from past to present. Some of those structures, which past civilizations and genius architects built by utilizing mathematics, astronomy and fine arts, are flocked by tourists from around the world. Here are some of them.

This unique structure has a flawless symmetry. Its four minarets are the most significant elements of its symmetrical structure and its windows and arches are in great harmony with its geometry. The reflection of the minarets, which show signs of tilting, on the pool outside provides a marvelous visual feast. Regarded as one of the top works in the world in its aesthetic aspects, the Taj Mahal is seen as the perfect harmony between geometry and aesthetics.

The Pyramid of Kukulkan in Chichen Itza, Mexico

The Pyramid of Kukulkan in Chichen Itza is a structure built by the Maya, who were a civilization specializing in astronomy. Today's scientists say that they benefitted from the astronomy in the works that they produced. The nine square terraces of this pyramid represent nine planets. There are 364 steps surrounding the temple. With the platform located at the top of the temple, the number of steps reaches 365, representing the days of the year. One of the most interesting properties of the structure is the light-and-shadow effect on the temple during the equinox, when the body of the feathered serpent god appears to be crawling down the side of the pyramid.

Designed by Catalan architect Antoni Gaudi, this large Roman Catholic church is one of the most iconic images of Spain. Hyperbolic paraboloid forms were used in the construction of the church's quite complex structure. The construction of the church began in 1882 and has yet to be completed. There is a magic square in the Passion Façade of the La Sagrada Familia. The sum of numbers located in each single line, row or diagonal in this magic square equals 33. It is said that this magic square is a symbol of Jesus Christ's age at the crucifixion.

Completed in 430 B.C., the Parthenon was designed upon the Ancient Greek ideals of harmony in perfect size. The ratio of the length of the temple to its width is 9:4. It was built by using the most appropriate numerical ratios. The corner columns were built larger in diameter because due to the fact that they would receive more sunlight, they would look thinner than the others, and thus a perfect aesthetic was acheived. The height and thickness of the reliefs and carvings on the temple were built in a way to prevent optical illusions.

Some of the most interesting structures in the world, the three Giza Pyramids were built between 2,753 B.C. and 2,563 B.C. The largest one of these pyramids is Cheops' Pyramid, which is the oldest of the Seven Wonders of the Ancient World. It also has the most flawless and interesting mathematical system. The most interesting properties of this structure astonish scientists, mathematicians and architects even today. If one divides the height of the pyramid by two, one obtains Pi. The meridian that crosses on the top of the pyramid is a point where sea and land intersect‎. The point where the pyramid is located is equally distant from the center of the world and the North Pole. If one multiplies the height of the pyramid by one billion, one obtains the distance between the world and the sun. The total surface area of the pyramid equals the square of its height. Sunlight enters the pyramid twice a year, once on the birthday of the Pharaoh Cheops and the other on the day that he ascended to the throne.

Eden Project, the construction of which was completed in 2011, is the largest greenhouse complex in the world at 5.5 acres. Inside the structure, which was built in an old stone quarry, is an educational center showing the relationships between plants and humans and nearly 100,000 varieties of plants. The transparent geodesic domes of hexagonal and pentagonal cells are quite elegant. The spiral architecture of the education facilities, which resemble an insect, was designed with inspiration from the Fibonacci sequence.
Last Update: Jul 16, 2015 10:41 pm
RELATED TOPICS