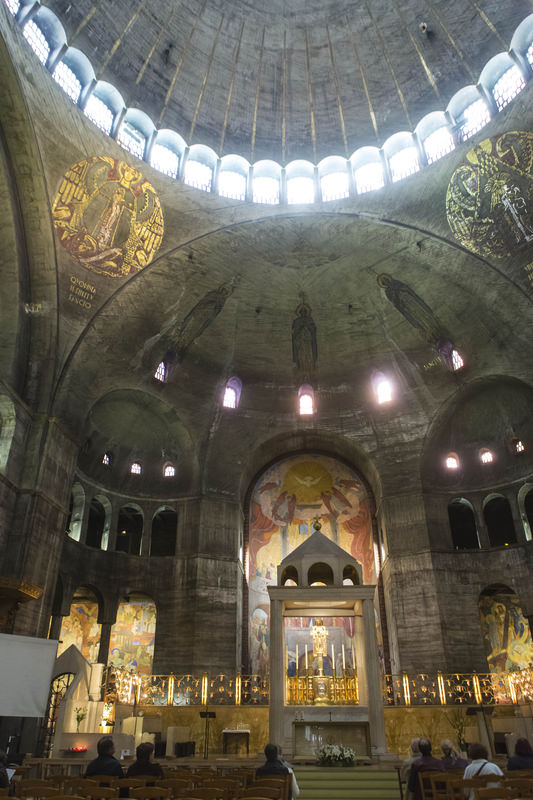 Opened for prayers in 1929 and listed on the Cultural Heritage List of France in 1979, the church is famous for its dome, which is a very rare architectural design for a church in Western Europe.
by daily sabah Sep 30, 2015 12:00 am

The Church of Saint Esprit resembles the Hagia Sophia in Istanbul, especially in terms of its interior architecture, which makes it a must-see destination for Turkish tourists

The Eglise du Saint Esprit (The Church of St. Esprit), which is reminiscent of the Hagia Sophia in Istanbul with its dome and interior architecture, and nicknamed the "Little Hagia Sophia" by the locals, is waiting to welcome Turkish visitors. Located in Daumesnil, the region that was settled in the 19th century after the orders of Napoleon III in eastern Paris, the church stands out among other churches of the same period in the region thanks to its architectural features. Opened for prayers in 1929 and listed among the Cultural Heritage List of France in 1979, the church is famous for its dome, which is a very rare architectural design for churches in France as well as Western Europe.

The dome of the church is 22 meters in diameter, its summit is 33 meters above ground level and it is believed that the Hagia Sophia in Istanbul inspired the design of the church. Speaking to Anadolu Agency (AA), Olivier Byl-Dupuich, the representative of a cultural association called "Art, Culture et Foi," said the locals were surprised to see the similarities between the Church of St. Esprit and the Hagia Sophia when it was first opened and have called the church the "Little Hagia Sophia" ever since.

He said the architect of the church, Paul Tournon, defended himself and said he did not copy the Hagia Sophia, but he was simply inspired by its architecture. The Church of St. Esprit, which is one of the more recently opened churches in Paris, is different from other historical buildings around the area as it was entirely constructed from concrete. According to an official of the church, the church's walls were originally white but became darker due to burning candles. Byl-Dupuich said the dome, which was built in only 27 days, symbolizes "integrity and eternity." He added that buildings with domes faded away in Western Europe due to the dominance of Gothic architecture; however, the churches with domes come back to the fore with the construction of the Church of St. Esprit. The church, which presents a modern look except from its dome, also stands out among other historical churches in Paris with its interior details.

The frescos, which were drawn on the walls of the church by nearly 40 artists, tell the story of Christianity starting from the 12 apostles to the 20th century. Highlighting that the church does not welcome many visitors since it is not located in the tourists destinations of the city, Byl-Dupuich said he rarely meets Turkish tourists. "We are waiting to welcome Turkish visitors. This place is more than a church; our doors are open to everybody," Byl-Dupuich said. Architect Alain Leroy-Chaumette, who is also a member of Art, Culture et Foi, encouraged a group of imams who visited the church to investigate the similarities between the Church of St. Esprit and the Hagia Sophia. The members of the association said they are ready to organize special tours for Turkish visitors who want to visit the church.
RELATED TOPICS