Find everything for a perfect holiday in Antalya 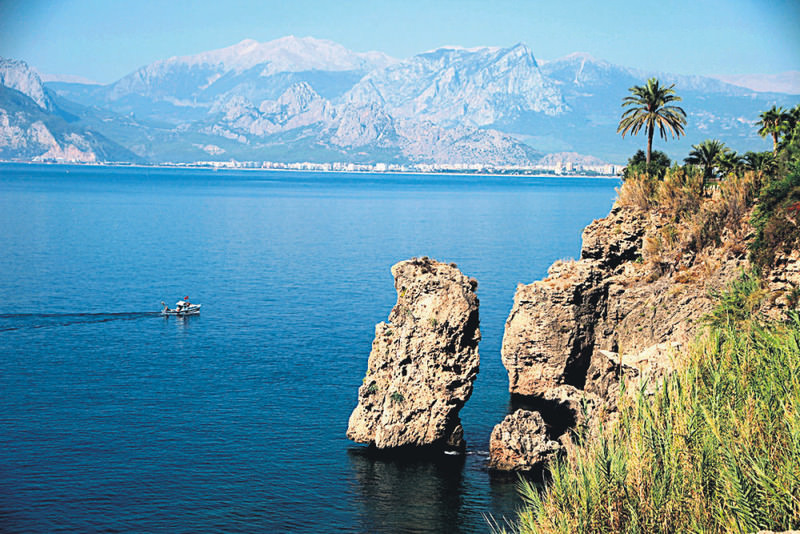 Even though winter is knocking at the door, Antalya, Turkey's tourism hot spot and popular resort city, has many things to offer, from diving activities to a swim off its blue flag beaches

Turkey's southern province of Antalya, known as the most famous touristic destination in the country with blue flag beaches and a vivid nightlife, seems to be drawing more attention this November with hundreds of Russian tourists, who changed their routes toward the city after the plane crash in Egypt and the G20 summit, which is scheduled to be held on Nov. 15-16.

Antalya has always been a renowned spot for tourists even in the off-season, but this year November has turned into a high season and Antalya still offers much to those who are about to visit.

The summer never leaves Antalya all year round, but in November the weather is much more relaxing than the summer heat and the sea temperature is still warm enough for a swim. So, if you are on the road to arrive in Antalya, or are planning a nice vacation before the harsh weather conditions knock on the door, here are some fascinating activities for you to do while in the popular Turkish resort city.

From diving to rafting to a historical tour, Antalya has many unique experiences to offer according to your holiday plans.

If your definition of a holiday is living within a pocket of nature and experiencing a rush of adrenaline, you have the chance to experience an underwater adventure in Turkey. Underwater caves and mysterious shipwrecks make it a must-visit destination for those seeking the thrill and excitement of diving. If you are not an advanced diver, there are also many diving courses that you can take in order to learn how to dive and enjoy the beautiful waters along the Turkish coast. Antalya features dozens of diving spots, such as Kemer and Kaş, as well as numerous caves. Accepted as one of the most untouched tourist destinations in Turkey, Kaş is one of the most suitable places for diving in the country and is included on the list of the world's top 100 diving destinations. Kaş boasts more than 25 diving sites, where you are bound to discover dozens of amazing underwater remains. There are shipwrecks, caves, landscapes, ancient amphorae, underwater canyons and drop-offs into the turquoise waters of Kaş. When you dive into the Mediterranean waters, you will witness how history lies cradled in the arms of the sea. In Antalya's Kemer district, you can also find many diving schools and different diving opportunities. Just inside the entrance of Antalya's port, a French transport vessel lies 20-32 meters under the sea. Apart from this historic submerged vessel, you can also visit the town of Tekirova for diverse diving experiences or dive into the deep sea in Üç Adalar (three islands) to experience cave diving and underwater photography. Do not be surprised if you encounter dolphins during your dive. Antalya's other hot spot for diving, Kalkan, is suitable for advanced divers who are looking for a more serious diving experience. Underwater streams, harsh winds and rare fish species are among the features you will find. Be prepared to be amazed while watching hundreds of different kinds of fish and marine animals riding the currents. Turtles, tuna, sharks and stingrays are among the species that you can see in Kalkan.

Antalya is one of the few cities that draw the attention of tourists from the Netherlands, Russia, Germany and the rest of the world every year to experience its marvelous beaches and year-round warm climate in this stunning Mediterranean city. The Turkish Riviera has a record number of Blue Flag beaches with 197 in total. The towns of Alanya, Side, Manavgat, Lara, Finike, Konyaltı, Kemer and many more, have not only perfect beaches that have been awarded a Blue Flag to swim, but ancient ruins and villages that you can visit. Among these places are hotels, villages, campsites and public beaches that you can choose according to your holiday preferences. In Antalya, the most popular beach is Cleopatra Beach, taking its name from the beauty of the Queen of the Nile. Located far from the city center, Kaş is one of Turkey's best locations not only for its Blue Flag beaches, but also for scuba diving as it has 50 sites, including submerged aircraft and vessels. Selected by the Sunday Times as the Best Beach in the World, the 15-kilometer-long Patara Beach in Antalya, situated close to Fethiye, is also the Mediterranean's longest. A true wonder of nature, Patara Beach is surrounded by historic relics and is truly a site to relax in. Side, has nine Blue Flag beaches: Titreyen Göl, Side One, Side Two, Sorgun, Sorgun Two, Side Public Beach, Club Ali Bey, Sol Kamelya and Köymeydanı Beach. It is smaller and quainter than other Mediterranean vacation spots and is a favorite because of its natural beauty. In addition to visiting historical sites, it is also the ideal spot to enjoy sunbathing and swimming in crystal clear waters. The transportation in Antalya is one of the easiest in the country to use. It includes an international airport and all the public transport you need to reach your destination quickly.

Caves to visit around Antalya

Discovered by accident in 1948 while building a harbor and located in the southern city of Antalya, Damlataş Cave is one of the most visited caves in the country with its amazing architecture and mystical structures. Here, you can discover how cool blue water combines with the natural beauty of the underground, and according to officials, stalactite and stalagmites in the cave were formed over 15,000 years ago. Moreover, legends say that the air within the cave is beneficial to asthmatic patients, which caused scientists to analyze a sample of the air to verify this. Following tests, it has been found that the air is beneficial to patients suffering from non-allergy asthma. Located on Antalya-Kemer highway, Beldibi cave is at the bottom of the limestone rocks extending into the sea. It is a magnificent cave that was mostly used during the Paleolithic Age, but the findings from the cave mainly belongs to the Mesolithic Age. There are pictures on the wall and bone carved tools that date back 15,000 years before. If you are interested in the early ages, Beldibi Cave is a suitable destination for you to visit.

Kekova, in the southern city of Antalya, is a region that boasts mesmerizing islands. Being among the nominated properties on the UNESCO Tentative Lists, Kekova includes historical remnants of Lycian settlements, including Teimioussa and the sunken city of Simena, bays and islands. The Kekova region was declared a specially protected area in 1990 to protect the region's nature, culture and geography. In ancient times, Kekova was a small fishing village. Today, hosting different civilizations, Kekova is one of the top tourist destinations in the country. As a result of geological movements of the island, the city is interesting, as half of the city is under water, while half of it is above. In addition to its cultural features, Kekova has an undulating coastline, hydro biological features and mesmerizing beauty. Kekova is also marked as the only place in the region where you can witness flying fish. If you want to find a peaceful atmosphere that combines history, luxury and nature, this Lycian settlement will embrace you with all its beauty. Güllük Dağı National Park in Antalya, which is among UNESCO Tentative Lists, is a hidden valley between the mountains. At 1,050 m above the sea, there is the fortified ancient city of Termessos, which is believed to be linked with the legend of Bellerophon. There are city walls, towers, King's Road, Gymnasium, theater, tombs, cistern and drainage systems in the ancient city.

Trails bound by history around Antalya

Located between the touristic destinations of Fethiye and Antalya along the southern Tekke Peninsula, historically known as Lycia, the 509-kilometer Lycian Way is one of the country's first way-marked trails. You can discover spectacular coastal views and archaeological treasures dating back to the eighth century B.C. On the way, you can also see interesting villages with their Lycian traditions. The Lycian Way is not only a trekking activity, but also a social, cultural and historical discovery for travelers. You can hike for a day, a weekend or a full week according to your schedule and desire for discovery. Lastly, this route is definitely the best way to get to know the real Turkey behind the tourist facade. The route includes the ruins of Greek and Roman cities, and the vivid blue sea of the Mediterranean will be your main friend along the route of the Lycian Way. The route is rated from medium to hard and is not level for walking, as it has many ascents and descents as it approaches and veers away from the sea. You can hire a guide for the hike in this fascinating spot or participate in a trekking group. The route includes coastal paths and remote highlands and villages, so you can also meet villagers who may even invite you to their homes for lunch or dinner to show you some Turkish hospitality. Being one of the top trails in Turkey, St. Paul's Trail is a way-marked trail of around 500 kilometers from the starting point to the ruins of Perge in eastern Antalya and runs through Yazılı Canyon National Park. Owing its name to the path, St. Paul supposedly took on one of his journeys to spread Christianity throughout Anatolia. St. Paul's Trail will let you engage with nature and rural villages where you can discover the life of the inhabitants of picturesque old stone and timber villages along the way. You can stop off in small villages and discover the daily life of villagers by seeing local handcrafts, watch cheese and yogurt being made and experiencing Turkish hospitality. The route starts at sea level and climbs up to 2,200 meters or an optional 2,800 meters. In Perge, where the route starts, you will find historic Greek and Roman ruins as well as natural wonders, including canyons and forests, but it will get wilder as you climb. Compared to the Lycian Way, it can be said that St. Paul's Trail is slightly wilder, but this is what makes it an adventure.
Last Update: Oct 16, 2016 10:19 pm