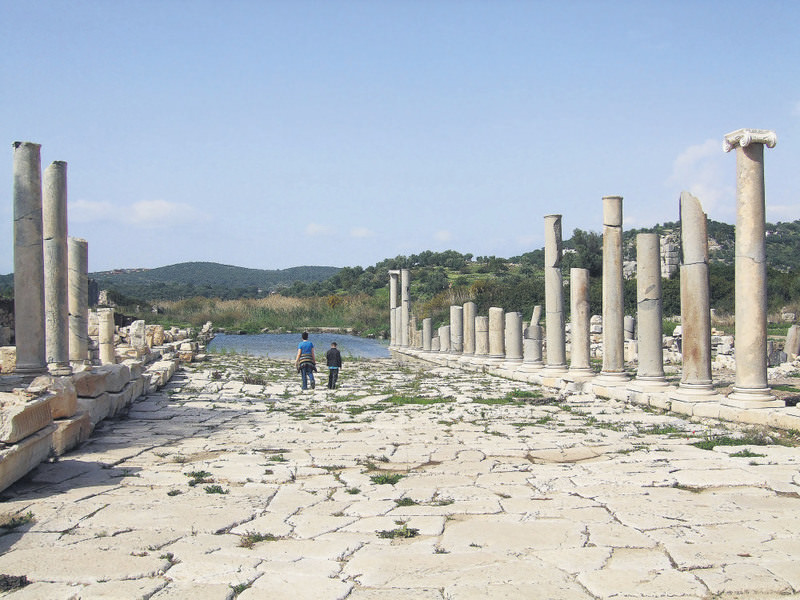 Home to many ancient civilizations, western Turkey offers mesmerizing Roman sites for local and foreign tourists to discover the remains of theaters, baths and temples

A cultural civilization where the East meets the West, Turkey has been home to many civilizations throughout history. Many empires that left their marks on their respective eras were located in modern-day Anatolia. Even though these ancient civilizations now cease to exist, the artifacts they left behind still mesmerize visitors. Across Turkey, ancient Roman theaters, temples and historic ruins await local and foreign tourists.

The Roman Empire, "Res Publica Romana," is considered one of the most significant civilizations of history. The empire succeeded the 500-year-old Roman Republic and controlled a large territory of nearly six million square kilometers from 27 B.C. to 1453 A.D. In the fourth century, the empire was divided into East and West, and in the five century the Roman Empire of the west fell apart. The Eastern Roman Empire, known as the Byzantine Empire, collapsed when the Ottomans conquered Istanbul in 1453 A.D. Anatolia was the highlight of Asia Minor, with its strategic location between the East and the West and its numerous trade routes, agricultural and military facilities during the time of the Roman Empire. The Romans captured Asia Minor in the second century B.C. - succeeding Alexander the Great - and ruled for many centuries. The province of Asia Minor was established and the Romans named Ephesus as the capital city.

Ephesus is one of the most well-known sites harboring remnants of the Romans. Located in the western Turkish province of İzmir, Ephesus -- "Efes" in Turkish -- is one of the most remarkable Roman sites. Built in the 10th century B.C., the city was founded by Attic and Ionian colonists. The Temple of Artemis is the most famous ancient remnant in the city and it is one of the seven ancient wonders of the world. This ancient city is home to one of the seven churches of Asia, cited in the Book of Revelations. Along with the Temple of Artemis, the House of the Virgin Mary is another destination that makes Ephesus worth a visit. According to legend, the Virgin Mary spent her last days in Ephesus and since the 19th century, the House of the Virgin Mary has been regarded specially for that reason, revered by many Catholics who visit the House of the Virgin Mary as a sort of pilgrimage. The ancient city of Ephesus is also believed to be where the story of the Seven Sleepers took place. According to Muslims, Catholics and Orthodox Christians, the seven sleepers slept in a cave in Ephesus for centuries because they were persecuted for their belief in God. To be part of a mesmerizing journey into the past, Ephesus is only a short flight from Istanbul, making the mesmerizing journey into the past accessible for visitors. After flying from Istanbul to İzmir's Adnan Menderes Airport, visitors rent a car and travel towards İzmir's Selçuk district where Ephesus awaits. In addition to the historic remnants in the ancient city, the famous Library of Celsus is found there, along with an ancient theatre and Roman baths. The ancient theater, which was capable of holding 25,000 spectators, was initially used by the Romans for drama performances, but was later used for gladiatorial combat. 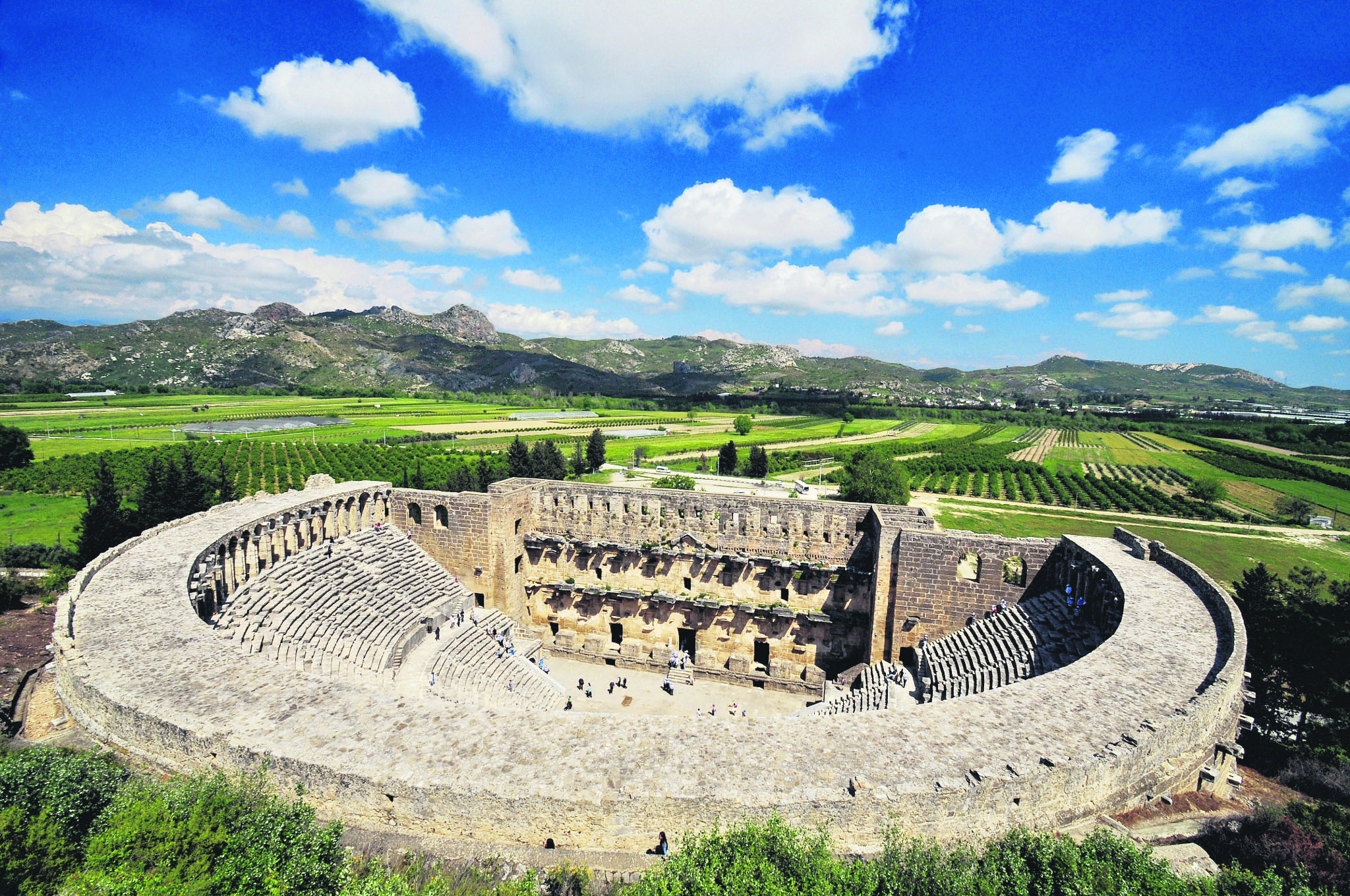 Another must-see Roman site in Turkey is Aspendos, which is located near the touristic province of Antalya. The ancient Greco-Romano city is situated on the Eurymedon River about 16 kilometers inland from the Mediterranean Sea, sharing a border with Side, its once hostile neighbor. According to the legend, Greeks from Argos founded the city around 1,000 BC. Later, the city fell into the hands of the Persians, Alexander the Great, and finally, the Romans captured Aspendos. The city saw a steady decline toward the end of the Roman Empire. 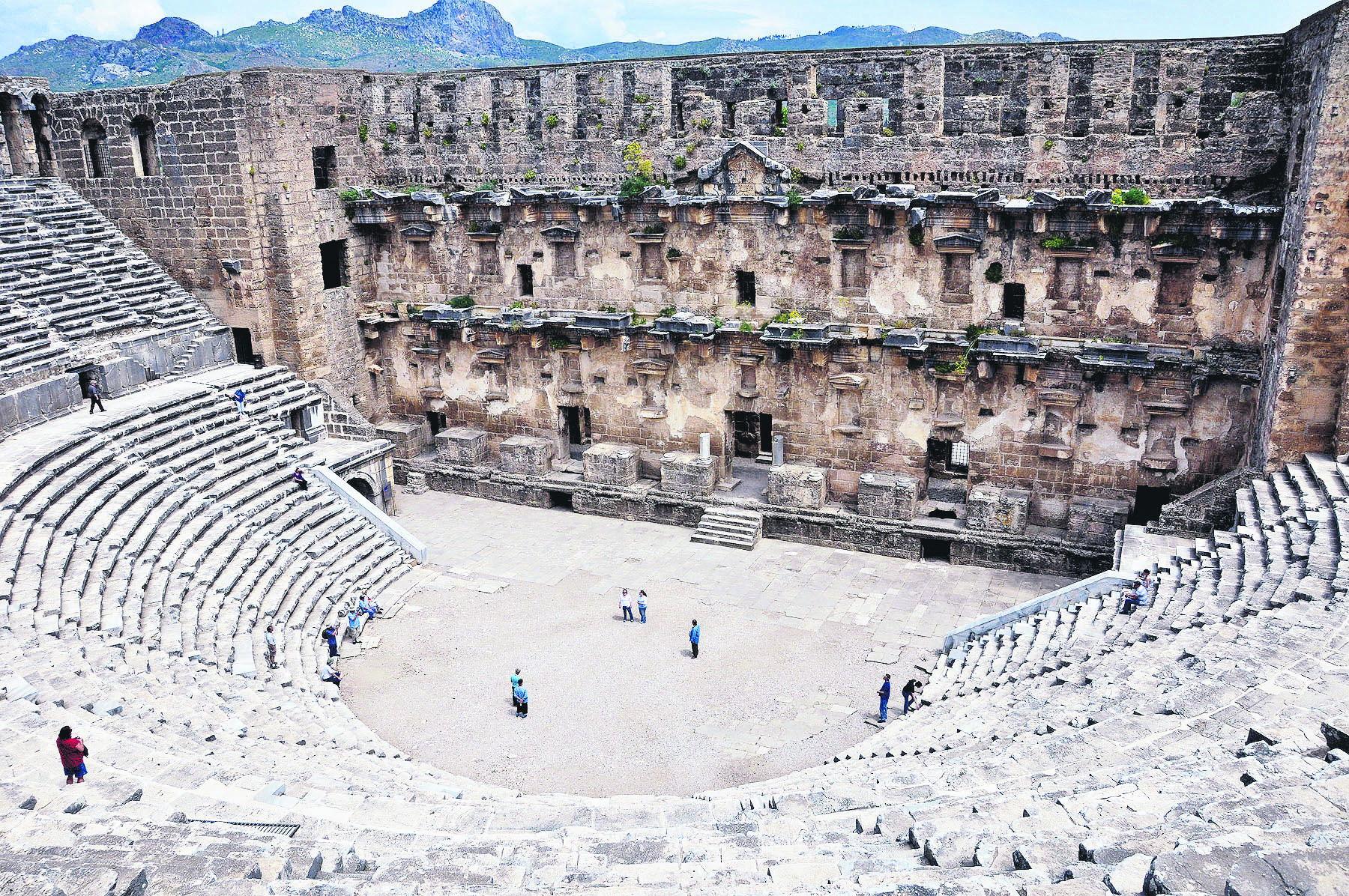 The most outstanding remnant in Aspendos is the Aspendos Theater with a diameter of 96 meters and a seating capacity of 7,000. Built in 155 by a Greek architect, the theater was repaired by the Seljuks and used as "kervansaray." Today, the Aspendos International Opera and Ballet Festival put on shows in the theater in spring and early summer. The remnants of a basilica, agora, nymphaeum and a Roman aqueduct are among the Roman sites to visit in Aspendos. 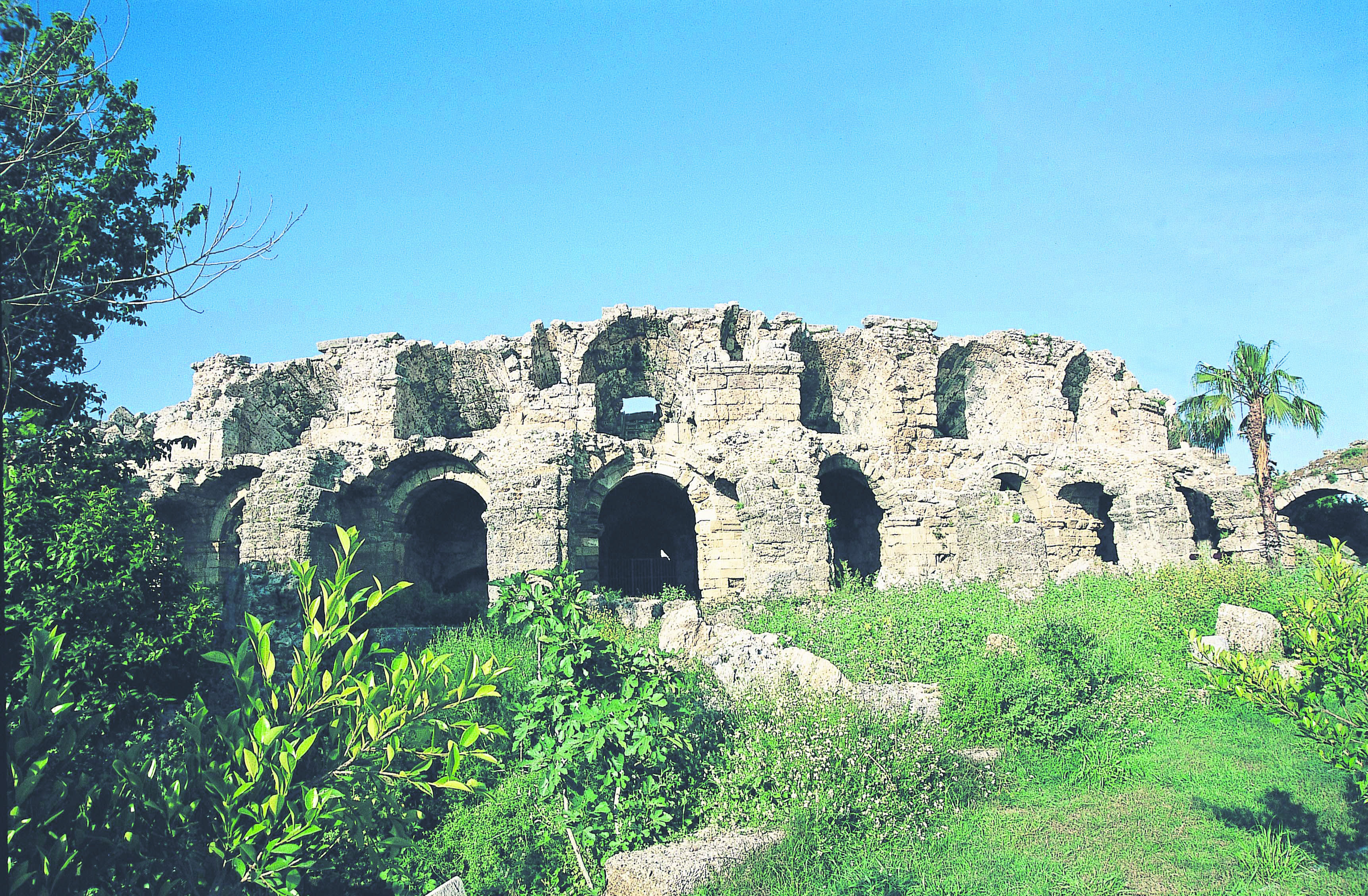 With its natural harbor, Patara is believed to have been founded by Patarus, a son of Apollo. Falling into the hands of Alexander the Great, the Roman general, Brutus, conquered Patara in 42 B.C. The Lycian settlement later turned into a magnificent Roman site with mesmerizing beaches along the Mediterranean Sea. The legend of Santa Claus has its geographic origins in Patara. The man behind the story of Father Christmas lived in the 4th century A.D. in a place known as Patara on the southwestern coast of what was then the Byzantine Empire. His name was Nicholas and he was the son of a very rich family. When Nicholas's parents passed away, the young man was left with a fortune. Later, he became the bishop of Myra, a town further up the coast from Patara, which is now called Demre. Being a generous and big-hearted man, Nicholas used to climb onto the rooftops of people's homes and drop coins down their chimneys. What makes Patara such an amazing destination, is also its beaches. Patara Beach was voted one of the top beaches in the world by Times Online's Best of 2005 poll, and is known as the "widest beach of the northern Mediterranean." Considering its 12-kilometer stretch of white sands, it is not so difficult to understand why this beach is the best place to experience heaven on earth. Located in Turkey's southern tourist spot of Kalkan-Kaş, Patara Beach offers both the vivid blue waters of the Mediterranean Sea and the ancient site of Patara, where history and nature collide. The beach is believed to be the birthplace of Apollo, and includes the ruins of western Mediterranean harbors that hosted ships from all over the world. The beach is also one of the few that are visited by loggerhead sea turtles, which lay their eggs between the months of May and October. Because of this, visitors will see caution signs that protect the eggs during their incubation period. Furthermore, strict building restrictions help make this beach very special and a natural wonder. There is only one small cafe on the beach, which is run by locals with no overbearing buildings at all. There is no commercialized development or water sports facilities: only pure tranquility and peace grace the coastline of Patara. 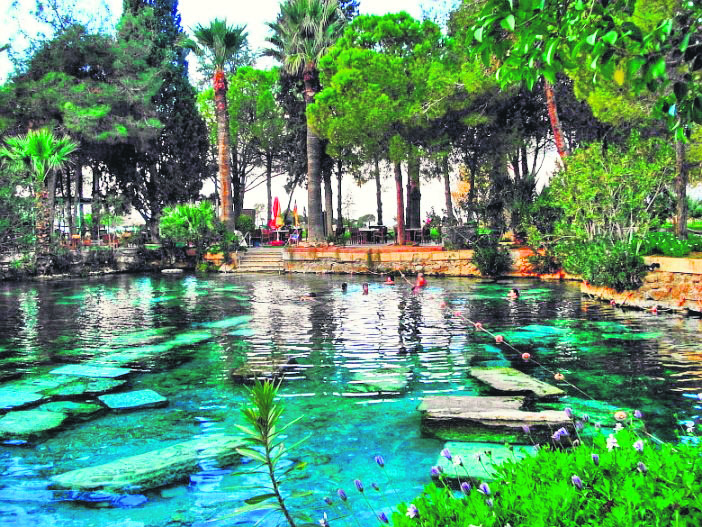 Hierapolis, also known as Pamukkale - cotton castle in Turkish - is located in western Turkey. The hot springs in Hierapolis have been used as a spa since the second century B.C. due to the healing effects of the springs. The city was first founded as a thermal spa by the Seleucid Empire during ancient times and later became a part of the Roman province of Asia around 133 B.C. During a huge earthquake in 17 A.D., the city was destroyed. During the Roman Empire, Hierapolis was a famous destination for spa facilities, with thousands of people flocking to the springs to benefit from its medical properties. It was included on UNESCO's World Heritage List in 1988 based on natural and cultural criteria. Famous for its hot springs and travertines (terraces of carbonate minerals left by flowing waters), Hierapolis is for those who are looking for a relaxing experience. Among the dozens of historical sites to visit, there is the Temple of Apollo, noteworthy gates, a nymphaeum, a martyrium, many baths, pools and theatres. Home to the ruins of many different civilizations, natural wonders and pure white travertines formed from hot calcium-filled mineral water, Pamukkale is distinct for its three different thermal regions - Sarayköy, Karahayıt and Gölemezli - offering health benefits with springs and mud baths. In Pamukkale, you can spend a day or just a few hours being cured of your dermatological ailments with pure, organic skin treatments. You should also find an opportunity to visit the amazing travertines that enable you to see the kind of beauty nature is able to create.
RELATED TOPICS