Do not miss the natural beauty of Antalya's seaside towns

With dozens of beautiful seaside towns, Antalya has many hidden recreation areas to experience the spirit of spring as the city hosts EXPO 2016

Antalya, the most popular city in Turkey for tourists, is hosting EXPO 2016, which opened on Friday with the theme "Flowers and Children," with 51 participating countries. There are many things to do in the city and seaside towns to visit.

The summer never leaves, but in spring the weather is much more relaxing, and the sea is warm enough for a swim. So if you are on the road to Antalya or are planning a nice vacation before the high season, here are some fascinating activities for you: From diving to rafting to historical tours, Antalya offers many unique experiences for your holiday. 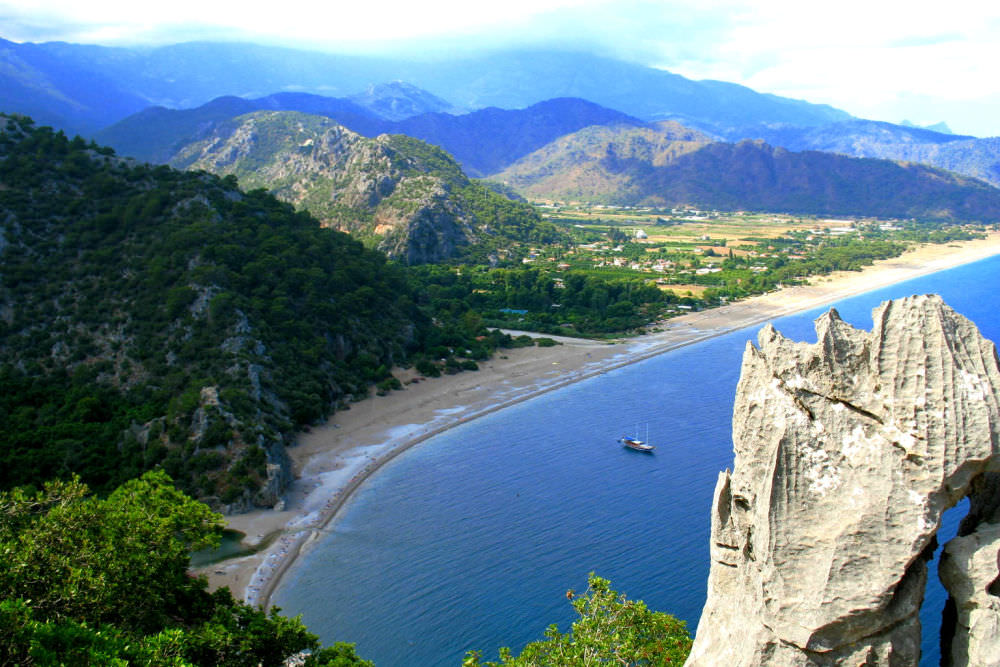 Separated from the renowned city of Olympos only by a rock, Çıralı has one of the most beautiful secluded beaches on the Mediterranean coast and shares Olympos' Hellenic ruins and historic sites. Çıralı is famous for its flaming rocks, natural flames that burn constantly on a mountainside at the north end of Çıralı village. These eternal flames have been burning methane gas from vents on the rocky slopes for thousands of years. Known as a landmark for ancient mariners passing through the Mediterranean Sea, the flames around Çıralı have died down a bit since antiquity.

Even though less remarkable than what the ancients saw, it is still an incredible natural wonder. Don't forget to look up at the sky while lying on the beach. The enchanting Milky Way glides above you as in films, but with a little difference, as you get to see it directly for yourself.

How to get there: Minibuses leave from Antalya's main station for intercity buses. After hopping off at the junction on the upland section of the main coastal highway, catch minibuses that depart fairly frequently. Çıralı and Olympos are only half a kilometer from each other, but if you do not want to hop on and hop off during your visit, rent a car and reach the two beaches and discover other natural wonders on the way. 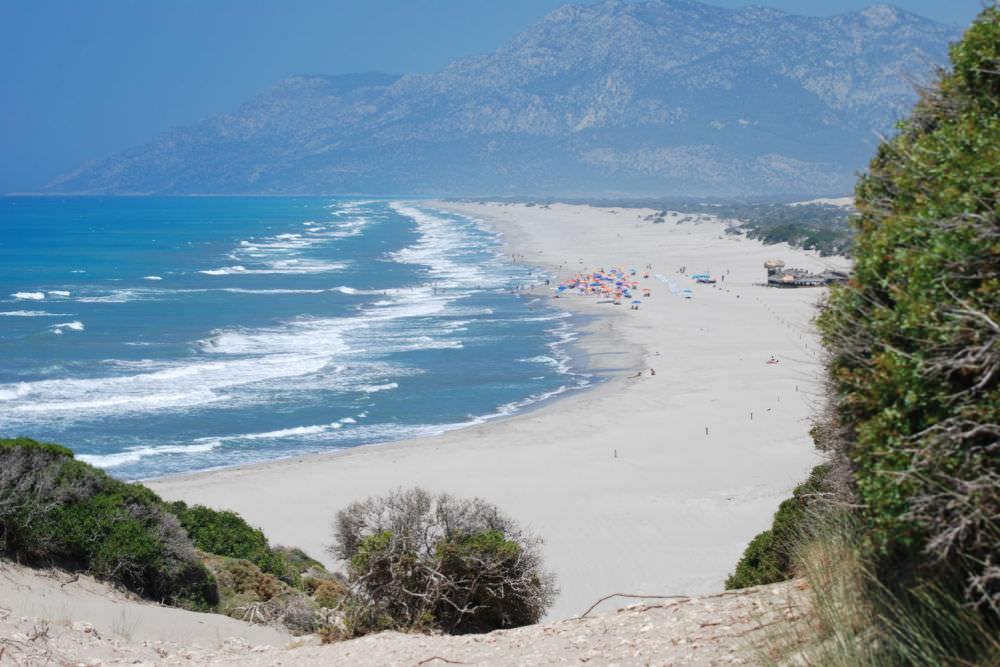 Patara Beach has been voted one of the top beaches in the world by Times Online, Best of 2005, and is known as the "widest beach of the northern Mediterranean." Considering its 12-kilometer stretch of white sands, it is not difficult to understand why this beach is the best. Located on the southern tourist spots of Kalkan and Kaş, Patara Beach offers the vivid blue waters of the Mediterranean and the ancient site of Patara. The beach is believed to be the birthplace of Apollo and includes the ruins of western Mediterranean harbors that host ships from all over the world. The beach is also one of the few that loggerhead sea turtles visit to lay their eggs between May and October. Thus, visitors will see caution signs to protect the eggs.

Strict building restrictions help make this beach a special, natural wonder. There is only one café on the beach, run by locals, but no big, overbearing buildings: No development, no water sports, only pure tranquility and peace along the coastline of Patara.

How to get there: The beach is a 20-minute walk from Patara, but you can also take minibuses to the beach, and beach service buses run from Kalkan and Kaş. 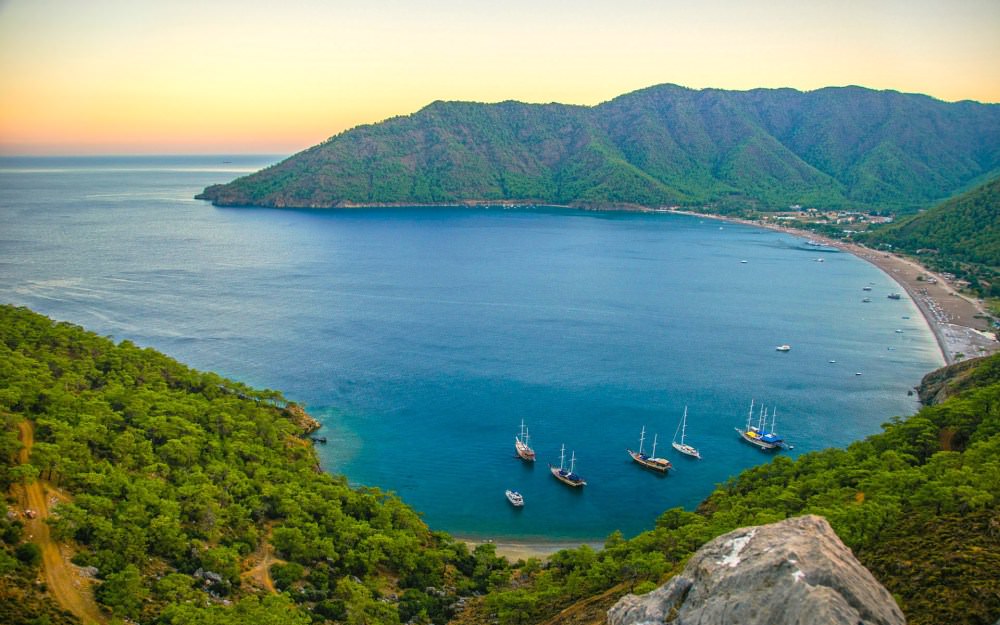 With priceless landscapes dominating Kemer's historic wonders and uncrowded beaches, Adrasan is a hidden secret of Antalya. An escape from the bustle of Antalya's city center, Adrasan has its own entertainment. While bungalow houses lack the luxury of expensive hotels, they offer guests a friendly, quiet environment. Most bungalows offer half-board, but are ready to meet all your demands during your stay. A boat trip is the perfect way to explore the sea and islands surrounding Adrasan and the city of Antalya. A boat tour costs about TL 40 ($18.65) with lunch included. While on the boat, ask the captain to take you to the "wellness spring," with water believed to have healing properties and the ability to cure illnesses.

For an adventure, jump off the rocks when the boat is inside Fosforlu Mağara (Phosphorescent Cave). This majestic cave takes on different colors in the moonlight, and sometimes in the day thanks to its geological structure.

How to get there: Minibuses leave Antalya's main station for intercity buses. Hop off at the junction on the upland section of the main coastal highway where minibuses depart fairly frequently to Adrasan or rent a car to discover Adrasan and the little bays around the town. 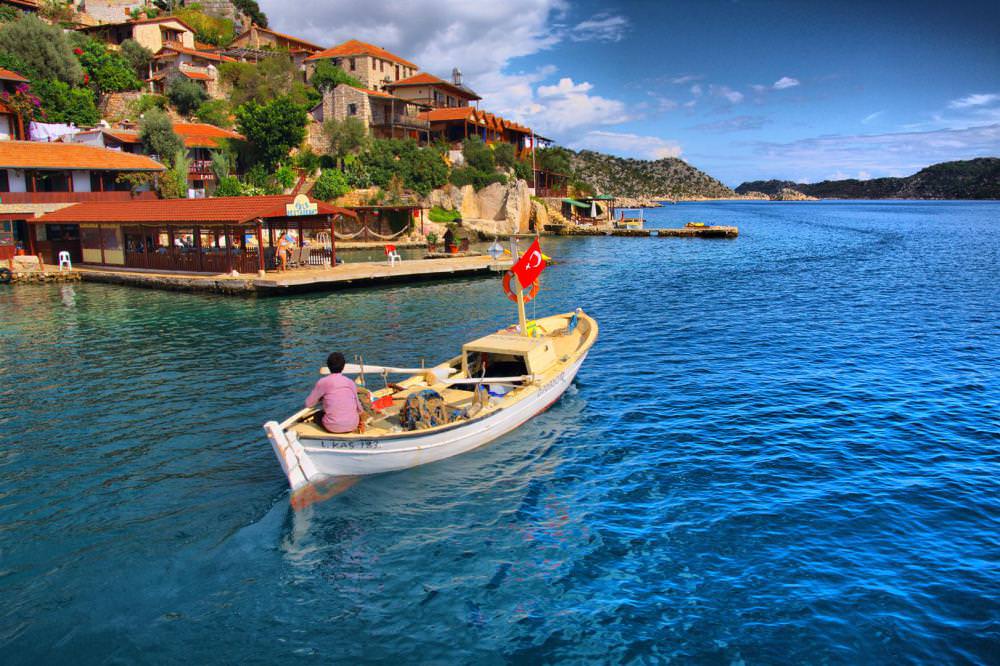 Kekova, in the southern city of Antalya, boasts mesmerizing islands. A nominated site on the UNESCO Tentative List, Kekova has historic remnants of Lycian settlements, including Teimioussa and the sunken city of Simena, bays and islands. Kekova was declared a specially protected area in 1990 to protect the region's nature, culture and geography. In ancient times, Kekova was a small fishing village. Today, hosting different civilizations, Kekova is one of the top tourist destinations in the country. As a result of geological movements of the island, the city is interesting, as half of the city is under water, while half of it is above. 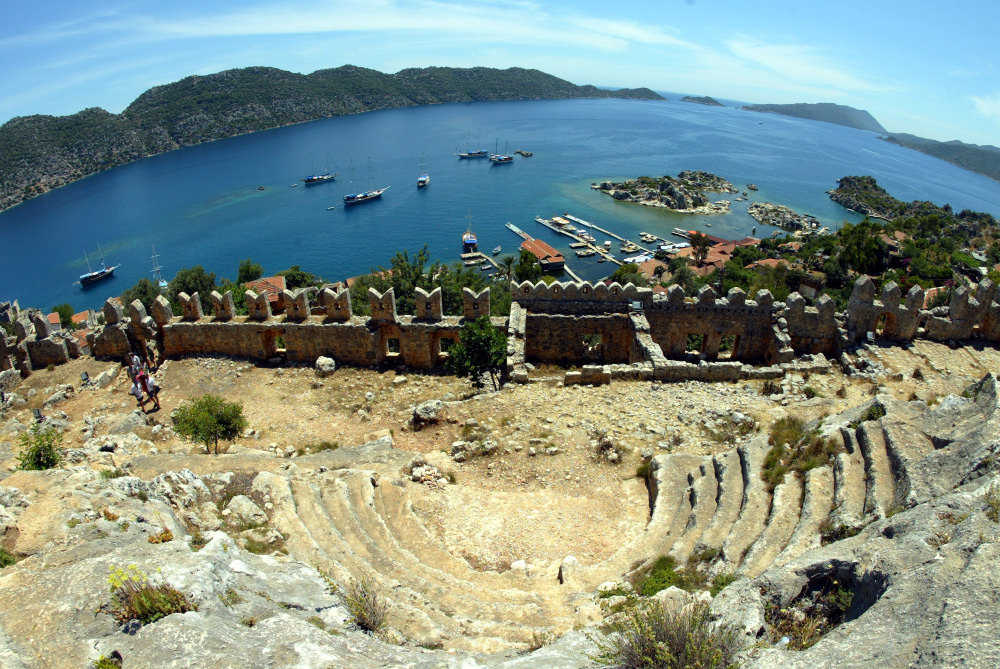 In addition to its cultural features, Kekova has an undulating coastline, hydro biological features and mesmerizing beauty. Kekova is also the only place in the region where you can see flying fish. For a peaceful atmosphere that combines history, luxury and nature, this Lycian settlement embraces you. Güllük Dağı National Park in Antalya, on the UNESCO Tentative List, is a hidden valley between the mountains. At 1,050 meters above the sea, there is the fortified ancient city of Termessos, which is believed to be linked to the legend of Bellerophon. There are city walls, towers, the King's Road, Gymnasium, theater, tombs, cistern and drainage systems in the ancient city.

How to get there: To access Kekova, drive on the Kaş-Finike highway and later drive 19 kilometers to Üçağız. Then, pass the village of Kılıçlı. In Üçağiz, you can find boats for hire or join a boat tour to see beautiful Kekova.

A year-round destination located in the southern province of Antalya, Alanya is worth a visit in any season, but it has a completely different atmosphere in spring. Since the sun shines throughout the day, the weather never feels too cold in spring. For those who want a holiday before the high season, Alanya should top your travel list. Alanya is 138 kilometers from Antalya and is one of the most iconic ports in Turkey. Known for its beautiful beaches and naval structures from Seljuk and Ottoman times, Alanya houses many historic sites, such as the Church of St. George, the Red Tower and the Castle of Alanya. Alanya offers guests top-tier recreational activities, including parasailing, windsurfing and boating. Villa Augusto is one of the best boutique hotels in the district with beautiful, cozy rooms, friendly staff and neat, clean services. Since it is a boutique hotel, you will not face the crowds of huge five-star hotels in Alanya.

How to get there: Alanya is a nearly two-hour drive from the nearest international airport in Antalya and only half an hour from Gazipaşa Airport, which opened for international flights in 2011. After landing in Antalya, there are many buses to Alanya.
RELATED TOPICS